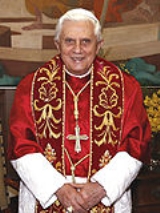 Overview
The Pope is the Bishop
Bishop (Catholic Church)
In the Catholic Church, a bishop is an ordained minister who holds the fullness of the sacrament of Holy Orders and is responsible for teaching the Catholic faith and ruling the Church....
of Rome
Diocese of Rome
The Diocese of Rome is a diocese of the Catholic Church in Rome, Italy. The bishop of Rome is the Pope, who is the Supreme Pontiff and leader of the Catholic Church...
, a position that makes him the leader of the worldwide Catholic Church (which is composed of the Latin Rite and the Eastern Catholic Churches in full communion
Full communion
In Christian ecclesiology, full communion is a relationship between church organizations or groups that mutually recognize their sharing the essential doctrines....
with the see
Episcopal See
An episcopal see is, in the original sense, the official seat of a bishop. This seat, which is also referred to as the bishop's cathedra, is placed in the bishop's principal church, which is therefore called the bishop's cathedral...
of Rome). In the Catholic Church, the Pope is regarded as the successor of Saint Peter
Saint Peter
Saint Peter or Simon Peter was an early Christian leader, who is featured prominently in the New Testament Gospels and the Acts of the Apostles. The son of John or of Jonah and from the village of Bethsaida in the province of Galilee, his brother Andrew was also an apostle...
, the Apostle. The current office-holder is Pope Benedict XVI
Pope Benedict XVI
Benedict XVI is the 265th and current Pope, by virtue of his office of Bishop of Rome, the Sovereign of the Vatican City State and the leader of the Catholic Church as well as the other 22 sui iuris Eastern Catholic Churches in full communion with the Holy See...
, who was elected in a papal conclave
Papal conclave, 2005
The Papal conclave of 2005 was convened as a result of the death of Pope John Paul II on 2 April 2005. After his death, the cardinals who were in Rome met and set a date for the beginning of the conclave to elect John Paul's successor. The conclave began on 18 April 2005 and ended on the following...
on 19 April 2005.

The office of the pope is known as the Papacy.

What is the protocol after the pope is pronounced dead?

Did the word Pope always refer to the Pope?

Is a Pope meant to remain a pope until death?

What is the method of informing the world of a new Pope?

What is the Triregnum?
More

314    Silvester I begins his reign as Pope of the Catholic Church, succeeding Pope Miltiades.

904    Sergius III comes out of retirement to take over the papacy from the deposed antipope Christopher.

1048    Protestantism: The villagers around today's Baden-Baden elect their own priest in defiance of the local bishop. Later, in a move that would not be seen before the Protestant Reformation, he is also elected Pope by acclamatio, just to die that same day. It is rumored that Ildebrando di Soana heard of the acclamatio and used it later to get elected himself as Pope Gregory VII.

1215    King John of England makes an oath to Pope Innocent III as a crusader to gain his support.

1274    In France, the Second Council of Lyons opens to regulate the election of the Pope.

1294    Saint Celestine V resigns the papacy after only five months; Celestine hoped to return to his previous life as an ascetic hermit.

1527    Spanish and German troops sack Rome; some consider this the end of the Renaissance. 147 Swiss Guards, including their commander, die fighting the forces of Charles V in order to allow Pope Clement VII to escape into Castel Sant'Angelo.

1590    Pope Urban VII dies 13 days after being chosen as the Pope, making his reign the shortest papacy in history.