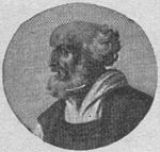 Encyclopedia
Pope John XIX born Romanus, was Pope
Pope
The Pope is the Bishop of Rome, a position that makes him the leader of the worldwide Catholic Church . In the Catholic Church, the Pope is regarded as the successor of Saint Peter, the Apostle...
from 1024 to 1032.

He succeeded his brother, Pope Benedict VIII
Pope Benedict VIII
Pope Benedict VIII , born Theophylactus, Pope from 1012 to 1024, of the noble family of the counts of Tusculum , descended from Theophylact, Count of Tusculum like his predecessor Pope Benedict VI .Benedict VIII was opposed by an antipope, Gregory...
(1012–24), both being members of the powerful house of Tusculum
Counts of Tusculum
The counts of Tusculum were the most powerful secular noblemen in Latium, near Rome, in the present-day Italy between the 10th and 12th centuries. Several popes and an antipope during the 11th century came from their ranks. They created and perfected the political formula of noble-papacy, wherein...
. Prior to being elected Pope he was an unordained layman and he was therefore ordained
Holy Orders
The term Holy Orders is used by many Christian churches to refer to ordination or to those individuals ordained for a special role or ministry....
a bishop in order to enable him to ascend the papal chair, having previously been a consul
Consul
Consul was the highest elected office of the Roman Republic and an appointive office under the Empire. The title was also used in other city states and also revived in modern states, notably in the First French Republic...
and senator.

He played a role in the process leading to the Schism of 1054
East-West Schism
The East–West Schism of 1054, sometimes known as the Great Schism, formally divided the State church of the Roman Empire into Eastern and Western branches, which later became known as the Eastern Orthodox Church and the Roman Catholic Church, respectively...
by rejecting a proposal by Patriarch Eustathius of Constantinople
Patriarch Eustathius of Constantinople
Eustathius was Ecumenical Patriarch of Constantinople from 1019 to 1025.Eustathius was the protopresbyter of the imperial palace when he was raised to the Patriarchal throne by the Emperor Basil II...
to recognise that Patriarchate's sphere of interest in the east. Against the grain of ecclesiastical history, John XIX agreed, upon being paid a large bribe, to grant the title of an ecumenical bishop to the Patriarch of Constantinople
Patriarch of Constantinople
The Ecumenical Patriarch is the Archbishop of Constantinople – New Rome – ranking as primus inter pares in the Eastern Orthodox communion, which is seen by followers as the One, Holy, Catholic, and Apostolic Church....
. However, this proposal excited general indignation throughout the Church, compelling him almost immediately to withdraw from the agreement.

On the death of the Emperor Henry II
Henry II, Holy Roman Emperor
Henry II , also referred to as Saint Henry, Obl.S.B., was the fifth and last Holy Roman Emperor of the Ottonian dynasty, from his coronation in Rome in 1014 until his death a decade later. He was crowned King of the Germans in 1002 and King of Italy in 1004...
(1002–24) in 1024, he gave his support to Emperor Conrad II
Conrad II, Holy Roman Emperor
Conrad II was Holy Roman Emperor from 1027 until his death.The son of a mid-level nobleman in Franconia, Count Henry of Speyer and Adelaide of Alsace, he inherited the titles of count of Speyer and of Worms as an infant when Henry died at age twenty...
(1024–39), who along with his consort was crowned with great pomp at St. Peter's Basilica
St. Peter's Basilica
The Papal Basilica of Saint Peter , officially known in Italian as ' and commonly known as Saint Peter's Basilica, is a Late Renaissance church located within the Vatican City. Saint Peter's Basilica has the largest interior of any Christian church in the world...
on Easter
Easter
Easter is the central feast in the Christian liturgical year. According to the Canonical gospels, Jesus rose from the dead on the third day after his crucifixion. His resurrection is celebrated on Easter Day or Easter Sunday...
of 1027.

In 1025 he sent the crown to Poland
Poland
Poland , officially the Republic of Poland , is a country in Central Europe bordered by Germany to the west; the Czech Republic and Slovakia to the south; Ukraine, Belarus and Lithuania to the east; and the Baltic Sea and Kaliningrad Oblast, a Russian exclave, to the north...
and blessed the coronation of the Polish king Bolesław Chrobry.

On 6 April 1027, John held a Lateran synod in which he declared for the patriarch of Aquileia
Patriarch of Aquileia
The Patriarch of Aquileia was an office in the Roman Catholic Church. During the Middle Ages the Patriarchate of Aquileia was a temporal state in Northern Italy. The Patriarchate of Aquileia as a church office was suppressed in 1752....
against that of Grado
Patriarch of Grado
This is a list of the Patriarchs of Grado . The patriarchate came into being when the schismatic Patriarch of Aquileia, Paulinus , moved to Grado in the mid 6th century. But in their reunion with Rome in 606, a rival office was set up in Old-Aquileia. Aquileia later entered communion with Rome but...
, giving its bishop (then Poppo) the patriarchal dignity and putting the bishop of Grado under his jurisdiction. In fact, the patriarch took precedence over all Italian bishops. In 1029, John revoked his decision and reaffirmed all the dignities of Grado. John also enacted a Papal Bull endowing Byzantius, Archbishop of Bari
Byzantius, Archbishop of Bari
Byzantius was the archbishop of Bari in the early eleventh century. He began the construction of the new cathedral, which was continued by his successors....
,with the right to consecrate his own twelve suffragans after the reattachment of the Bariot diocese to Rome in 1025. This was part of a concialtory agreement with Eustathius, whereby the existence of the Byzantine Rite
Byzantine Rite
The Byzantine Rite, sometimes called the Rite of Constantinople or Constantinopolitan Rite is the liturgical rite used currently by all the Eastern Orthodox Churches, by the Greek Catholic Churches , and by the Protestant Ukrainian Lutheran Church...
would be allowed in Italy in exchange for the establishment of Latin Rite churches in Constantinople.

He was said to be killed by a mob of angry peasants, but there is no evidence to support this. The actual cause of death is unknown.

After John XIX's death, his nephew, Pope Benedict IX
Pope Benedict IX
Pope Benedict IX , born Theophylactus of Tusculum, was Pope on three occasions between 1032 and 1048. One of the youngest popes, he was the only man to have been Pope on more than one occasion and the only man ever to have sold the papacy.-Biography:Benedict was born in Rome as Theophylactus, the...
(1032–44, 1045, 1047–48), was found as a successor, although he was still young: according to some sources, he was only 12, but he was more likely to have been about 18 or 20.