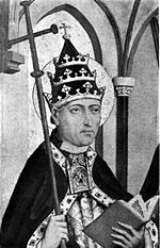 Encyclopedia
Pope Saint Gregory II was pope
Pope
The Pope is the Bishop of Rome, a position that makes him the leader of the worldwide Catholic Church . In the Catholic Church, the Pope is regarded as the successor of Saint Peter, the Apostle...
from May 19, 715 to his death on February 11, 731, succeeding Pope Constantine
Pope Constantine
Pope Constantine was pope from 708 to 715. With the exception of Antipope Constantine, he was the only pope to take such a "quintessentially" Eastern name of an emperor...
. Having, it is said, bought off the Lombards
Lombards
The Lombards , also referred to as Longobards, were a Germanic tribe of Scandinavian origin, who from 568 to 774 ruled a Kingdom in Italy...
for thirty pounds of gold, Charles Martel
Charles Martel
Charles Martel , also known as Charles the Hammer, was a Frankish military and political leader, who served as Mayor of the Palace under the Merovingian kings and ruled de facto during an interregnum at the end of his life, using the title Duke and Prince of the Franks. In 739 he was offered the...
having refused his call for aid, he used the tranquillity thus obtained for vigorous missionary efforts among the Germanic tribes, and for strengthening the papal authority in the churches of Britain
Great Britain
Great Britain or Britain is an island situated to the northwest of Continental Europe. It is the ninth largest island in the world, and the largest European island, as well as the largest of the British Isles...
and Ireland
Ireland
Ireland is an island to the northwest of continental Europe. It is the third-largest island in Europe and the twentieth-largest island on Earth...
. By excommunicating the Byzantine emperor Leo III the Isaurian
Leo III the Isaurian
Leo III the Isaurian or the Syrian , was Byzantine emperor from 717 until his death in 741...
in the course of the iconoclastic controversy of the Eastern Empire, he prepared the way for a long series of revolts and civil wars, which tended greatly to the establishment of the temporal power of the popes. His public letter to the Emperor denied the Imperial right to interfere in matters of doctrine, the central tenet of Caesaropapism
Caesaropapism
Caesaropapism is the idea of combining the power of secular government with, or making it superior to, the spiritual authority of the Church; especially concerning the connection of the Church with government. The term caesaropapism was coined by Max Weber, who defined it as follows: “a secular,...
.

The name he selected was significant, expressing his intention to follow in the policies of Gregory the Great

He died in 731, and subsequently attained the honour of canonization. The day that Gregory is remembered in the "Martyrology" seems to be any one of February 11, February 13, and February 28.

Gregory II was an alleged collateral ancestor to the Roman Savelli
Savelli
thumb|300px|The Coat of Arms of the Savelli over a wall of the church of [[Santa Maria in Aracoeli]], [[Rome]].The Savelli were a rich and influential Roman aristocratic family who rose to prominence in the 13th century and became extinct in the main line with Giulio Savelli .The family, who held...
family, according to a 15th century chronicler, but this is undocumented and very likely unreliable. The same was said of the Seventh Century Pope, Benedict II, but nothing certain is known about a kinship between the two of them.
The source of this article is wikipedia, the free encyclopedia.  The text of this article is licensed under the GFDL.