Encyclopedia
A megalopolis is typically defined as a chain of roughly adjacent metropolitan areas. The term was used by Oswald Spengler
Oswald Spengler
Oswald Manuel Arnold Gottfried Spengler was a German historian and philosopher whose interests also included mathematics, science, and art. He is best known for his book The Decline of the West , published in 1918, which puts forth a cyclical theory of the rise and decline of civilizations...
in his 1918 book, The Decline of the West, and Lewis Mumford
Lewis Mumford
Lewis Mumford was an American historian, philosopher of technology, and influential literary critic. Particularly noted for his study of cities and urban architecture, he had a broad career as a writer...
in his 1938 book, The Culture of Cities, which described it as the first stage in urban overdevelopment and social decline. Later, it was used by Jean Gottmann
Jean Gottmann
Jean Gottmann FRS was a French geographer who was most widely known for his seminal study on the urban region of the Northeast Megalopolis. His main contributions to human geography were in the sub-fields of urban, political, economic, historical and regional geography...
in 1957, to describe the huge metropolitan area
Metropolitan area
The term metropolitan area refers to a region consisting of a densely populated urban core and its less-populated surrounding territories, sharing industry, infrastructure, and housing. A metropolitan area usually encompasses multiple jurisdictions and municipalities: neighborhoods, townships,...
along the eastern seaboard
East Coast of the United States
The East Coast of the United States, also known as the Eastern Seaboard, refers to the easternmost coastal states in the United States, which touch the Atlantic Ocean and stretch up to Canada. The term includes the U.S...
of the U.S. extending from Boston
Boston
Boston is the capital of and largest city in Massachusetts, and is one of the oldest cities in the United States. The largest city in New England, Boston is regarded as the unofficial "Capital of New England" for its economic and cultural impact on the entire New England region. The city proper had...
, Massachusetts
Massachusetts
The Commonwealth of Massachusetts is a state in the New England region of the northeastern United States of America. It is bordered by Rhode Island and Connecticut to the south, New York to the west, and Vermont and New Hampshire to the north; at its east lies the Atlantic Ocean. As of the 2010...
through New York City
New York City
New York is the most populous city in the United States and the center of the New York Metropolitan Area, one of the most populous metropolitan areas in the world. New York exerts a significant impact upon global commerce, finance, media, art, fashion, research, technology, education, and...
; Philadelphia, Pennsylvania
Pennsylvania
The Commonwealth of Pennsylvania is a U.S. state that is located in the Northeastern and Mid-Atlantic regions of the United States. The state borders Delaware and Maryland to the south, West Virginia to the southwest, Ohio to the west, New York and Ontario, Canada, to the north, and New Jersey to...
; Baltimore
Baltimore
Baltimore is the largest independent city in the United States and the largest city and cultural center of the US state of Maryland. The city is located in central Maryland along the tidal portion of the Patapsco River, an arm of the Chesapeake Bay. Baltimore is sometimes referred to as Baltimore...
, Maryland
Maryland
Maryland is a U.S. state located in the Mid Atlantic region of the United States, bordering Virginia, West Virginia, and the District of Columbia to its south and west; Pennsylvania to its north; and Delaware to its east...
and ending in Washington, D.C.
Washington, D.C.
Washington, D.C., formally the District of Columbia and commonly referred to as Washington, "the District", or simply D.C., is the capital of the United States. On July 16, 1790, the United States Congress approved the creation of a permanent national capital as permitted by the U.S. Constitution....
.

Modern interlinked ground transportation corridors, such as rail and highway, often aid in the development of megalopolises. Using these commuter passageways to travel throughout the megalopolis is informally called megaloping. This term was coined by Davide Gadren and Stefan Berteau.


The United States and Canada

Emerging megacities in China (in decreasing order of population): 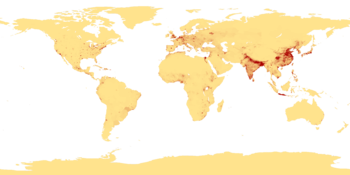 See below for a list of the world's largest megalopolises, in descending order of population using the most recent census available: