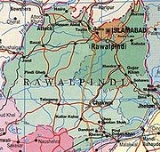 
Rawalpindi (Urdu
Urdu
Urdu is a register of the Hindustani language that is identified with Muslims in South Asia. It belongs to the Indo-European family. Urdu is the national language and lingua franca of Pakistan. It is also widely spoken in some regions of India, where it is one of the 22 scheduled languages and an...
: ,Rāwalpindī), locally known as Pindi, is a city in the Pothohar region of Pakistan near Pakistan
Pakistan
Pakistan , officially the Islamic Republic of Pakistan is a sovereign state in South Asia. It has a coastline along the Arabian Sea and the Gulf of Oman in the south and is bordered by Afghanistan and Iran in the west, India in the east and China in the far northeast. In the north, Tajikistan...
's capital city of Islamabad
Islamabad
Islamabad is the capital of Pakistan and the tenth largest city in the country. Located within the Islamabad Capital Territory , the population of the city has grown from 100,000 in 1951 to 1.7 million in 2011...
, in the province
Subdivisions of Pakistan
The administrative units of Pakistan consist of four provinces, one federal capital territory, and a group of federally-administered tribal areas...
of Punjab
Punjab (Pakistan)
Punjab is the most populous province of Pakistan, with approximately 45% of the country's total population. Forming most of the Punjab region, the province is bordered by Kashmir to the north-east, the Indian states of Punjab and Rajasthan to the east, the Pakistani province of Sindh to the...
. Rawalpindi is the fourth largest city in Pakistan after Karachi
Karachi
Karachi is the largest city, main seaport and the main financial centre of Pakistan, as well as the capital of the province of Sindh. The city has an estimated population of 13 to 15 million, while the total metropolitan area has a population of over 18 million...
, Lahore
Lahore
Lahore is the capital of the Pakistani province of Punjab and the second largest city in the country. With a rich and fabulous history dating back to over a thousand years ago, Lahore is no doubt Pakistan's cultural capital. One of the most densely populated cities in the world, Lahore remains a...
and Faisalabad
Faisalabad
Faisalabad , formerly known as Lyallpur, is the third largest metropolis in Pakistan, the second largest in the province of Punjab after Lahore, and a major industrial center in the heart of Pakistan. Before the foundation of the city in 1880, the area was very thinly populated. The population has...
. In the 1950s, Rawalpindi was smaller than Hyderabad
Hyderabad, Sindh
is the second largest city in the Sindh province of Pakistan. It is the seventh largest city in the country. The city was founded in 1768 by Mian Ghulam Shah Kalhoro upon the ruins of a Mauryan fishing village along the bank of the Indus known as Neroon Kot...
and Multan
Multan
Multan , is a city in the Punjab Province of Pakistan and capital of Multan District. It is located in the southern part of the province on the east bank of the Chenab River, more or less in the geographic centre of the country and about from Islamabad, from Lahore and from Karachi...
, but the city's economy received a boost during the building of Islamabad (1959–1969), during which time Rawalpindi served as the national capital and its population increased from 180,000 at the time of independence to over 4.5 million in 2007.

What does IJP(road) stand for?
More

What does stand for ijp road rwp
More
x