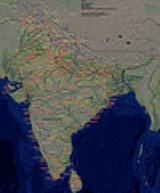 Overview
The name Varanasi has its origin possibly from the names of the two rivers Varuna
Varuna River
The Varuna River is a minor tributary of the Ganges River. It is named after the god Varuna.The Varuna rises at , flows east-to-southeast for some 100 km, and joins the Ganges at , just downstream of Varanasi. The name Varanasi itself is interpreted to be derived from the name of the river...
and Assi, for the old city lies in the north shores of the Ganga bounded by its two tributaries, the Varuna and the Asi, with the Ganges being to its south. Another speculation about the origin of the name is that the river Varuna itself was called Varanasi in olden times, from which the city got its name. This is generally disregarded by historians, though there may be some earlier texts suggesting it to be so.
Through the ages, Varanasi was variously known as Avimuktaka, Anandakanana, Mahasmasana, Surandhana, Brahma Vardha, Sudarsana, Ramya, and Kasi.

In the Rigveda
Rigveda
The Rigveda is an ancient Indian sacred collection of Vedic Sanskrit hymns...
, the city was referred to as Kasi or Kashi, "the luminous one" as an allusion to the city's historical status as a centre of learning, literature, and culture.

I need help for discussion over the topic "CIVIC MANAGEMENT OF VARANASI CITY (OR ANY CITY) AND ITS ART CULTURE CREATIVITY" Please help me guys.its ve...
More
x