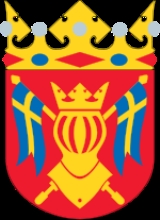 Encyclopedia
Finland Proper or Southwest Finland , is a region
Regions of Finland
Finland consists of 19 regions called in Finnish and in Swedish. The regions are governed by regional councils, which serve as forums of cooperation for the municipalities of a region. The main tasks of the regions are regional planning and development of enterprise and education. In addition,...
in south-western Finland
Finland
Finland , officially the Republic of Finland, is a Nordic country situated in the Fennoscandian region of Northern Europe. It is bordered by Sweden in the west, Norway in the north and Russia in the east, while Estonia lies to its south across the Gulf of Finland.Around 5.4 million people reside...
. It borders the regions of Satakunta
Satakunta (region)
Satakunta is a region of Finland, part of the former Western Finland Province. It borders the regions of Finland Proper, Pirkanmaa, Southern Ostrobothnia and Ostrobothnia. The main city of the region is Pori. The name of the region literally means Hundred...
, Tavastia Proper
Tavastia Proper
Tavastia Proper is a region of Finland. It borders to the regions Finland Proper, Pirkanmaa, Päijänne Tavastia, and Uusimaa.Hämeenlinna is the largest urban area in the region...
, Ahvenanmaa and Uusimaa.

The region of Finland Proper is made up of 28 municipalities, of which 11 are towns.