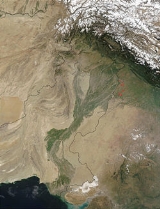 Overview
The Indus River is a major river which flows through Pakistan
Pakistan
Pakistan , officially the Islamic Republic of Pakistan is a sovereign state in South Asia. It has a coastline along the Arabian Sea and the Gulf of Oman in the south and is bordered by Afghanistan and Iran in the west, India in the east and China in the far northeast. In the north, Tajikistan...
. It also has courses through China
China
Chinese civilization may refer to:* China for more general discussion of the country.* Chinese culture* Greater China, the transnational community of ethnic Chinese.* History of China* Sinosphere, the area historically affected by Chinese culture...
and India
India
India , officially the Republic of India , is a country in South Asia. It is the seventh-largest country by geographical area, the second-most populous country with over 1.2 billion people, and the most populous democracy in the world...
.

Originating in the Tibetan plateau
Tibetan Plateau
The Tibetan Plateau , also known as the Qinghai–Tibetan Plateau is a vast, elevated plateau in Central Asia covering most of the Tibet Autonomous Region and Qinghai, in addition to smaller portions of western Sichuan, southwestern Gansu, and northern Yunnan in Western China and Ladakh in...
of western China in the vicinity of Lake Mansarovar in Tibet Autonomous Region
Tibet Autonomous Region
The Tibet Autonomous Region , Tibet or Xizang for short, also called the Xizang Autonomous Region is a province-level autonomous region of the People's Republic of China , created in 1965....
, the river runs a course through the Ladakh
Ladakh
Ladakh is a region of Jammu and Kashmir, the northernmost state of the Republic of India. It lies between the Kunlun mountain range in the north and the main Great Himalayas to the south, inhabited by people of Indo-Aryan and Tibetan descent...
district of Jammu and Kashmir
Jammu and Kashmir
Jammu and Kashmir is the northernmost state of India. It is situated mostly in the Himalayan mountains. Jammu and Kashmir shares a border with the states of Himachal Pradesh and Punjab to the south and internationally with the People's Republic of China to the north and east and the...
and then enters Pakistan via the Northern Areas (Gilgit
Gilgit
Gilgit is a city in northern PakistanGilgit may refer to other terms related with the area of the city:* Gilgit River* Gilgit Valley* Gilgit District* Gilgit Agency * Gilgit Airport...
-Baltistan
Baltistan
Baltistan , also known as بلتیول བལིུལ་ in the Balti language, is a region in northern Pakistan which forms Gilgit-Baltistan, bordering the Xinjiang Autonomous Region of China. In addition, a part of Baltistan also falls into Jammu and Kashmir of India. It is situated in the Karakoram mountains...
), flowing through the North in a southerly direction along the entire length of Pakistan
Pakistan
Pakistan , officially the Islamic Republic of Pakistan is a sovereign state in South Asia. It has a coastline along the Arabian Sea and the Gulf of Oman in the south and is bordered by Afghanistan and Iran in the west, India in the east and China in the far northeast. In the north, Tajikistan...
, to merge into the Arabian Sea
Arabian Sea
The Arabian Sea is a region of the Indian Ocean bounded on the east by India, on the north by Pakistan and Iran, on the west by the Arabian Peninsula, on the south, approximately, by a line between Cape Guardafui in northeastern Somalia and Kanyakumari in India...
near the port city of Karachi
Karachi
Karachi is the largest city, main seaport and the main financial centre of Pakistan, as well as the capital of the province of Sindh. The city has an estimated population of 13 to 15 million, while the total metropolitan area has a population of over 18 million...
in Sindh
Sindh
Sindh historically referred to as Ba'ab-ul-Islam , is one of the four provinces of Pakistan and historically is home to the Sindhi people. It is also locally known as the "Mehran". Though Muslims form the largest religious group in Sindh, a good number of Christians, Zoroastrians and Hindus can...
.

What is the length of indus river in china,pakistan and india

Two city-states along the indus river are?

How long is the Indus River?

what is the length (mile & km),drainage area(square miles) ,flow at the mouth and location

IS THE INDUS RIVER WATER POLUTIONED OR NOT?
More

Give me important facts about river indus