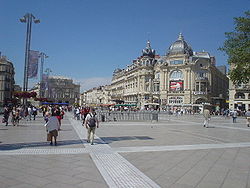 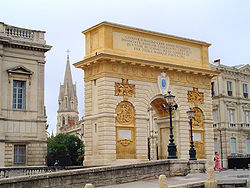 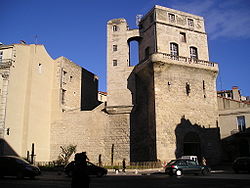 It is not known exactly at what date the schools of literature were founded which developed into the Montpellier faculty of arts; it may be that they were a direct continuation of the Gallo-Roman schools. The school of law was founded by Placentinus
Placentinus
Placentinus was an Italian jurist and glossator. Originally from Piacenza, he taught at the University of Bologna. From there he founded the law school of the University of Montpellier, in 1160....
, a doctor from Bologna university, who came to Montpellier in 1160, taught there during two different periods, and died there in 1192. The school of medicine was founded perhaps by a graduate of the Muslim Spain medical schools; it is certain that, as early as 1137, there were excellent physicians at Montpellier. The statutes given in 1220 by Cardinal Conrad, legate of Honorius III, which were completed in 1240 by Pierre de Conques, placed this school under the direction of the Bishop of Maguelonne. Pope Nicholas IV
Pope Nicholas IV
Pope Nicholas IV , born Girolamo Masci, was Pope from February 22, 1288 to April 4, 1292. A Franciscan friar, he had been legate to the Greeks under Pope Gregory X in 1272, succeeded Bonaventure as Minister General of his religious order in 1274, was made Cardinal Priest of Santa Prassede and...
issued a Bull in 1289, combining all the schools into a university, which was placed under the direction of the bishop, but which in fact enjoyed a large measure of autonomy.

Theology was at first taught in the convents, in which St. Anthony of Padua, Raymond Lullus, and the Dominican Bernard de la Treille
Bernard of Trilia
Bernard of Trilia was a French Dominican theologian and scholastic philosopher. He was an early supporter of the teaching of Thomas Aquinas. He lectured at Montpellier.-External links:*...
lectured. Two letters of King John prove that a faculty of theology existed at Montpellier independently of the convents, in January 1350. By a Bull of 17 December 1421, Martin V
Pope Martin V
Pope Martin V , born Odo Colonna, was Pope from 1417 to 1431. His election effectively ended the Western Schism .-Biography:...
granted canonical institution to this faculty and united it closely with the faculty of law. In the sixteenth century the faculty of theology disappeared for a time, when Calvinism
Calvinism
Calvinism is a Protestant theological system and an approach to the Christian life...
, in the reign of Henry II of France
Henry II of France
Henry II was King of France from 31 March 1547 until his death in 1559.-Early years:Henry was born in the royal Château de Saint-Germain-en-Laye, near Paris, the son of Francis I and Claude, Duchess of Brittany .His father was captured at the Battle of Pavia in 1525 by his sworn enemy,...
, held complete possession of the city. It resumed its functions after Louis XIII had reestablished the royal power at Montpellier in 1622; but the rivalries of Dominicans
Dominican Order
The Order of Preachers , after the 15th century more commonly known as the Dominican Order or Dominicans, is a Catholic religious order founded by Saint Dominic and approved by Pope Honorius III on 22 December 1216 in France...
and Jesuits interfered seriously with the prosperity of the faculty, which disappeared at the Revolution. The faculty numbered among its illustrious pupils of law Petrarch
Petrarch
Francesco Petrarca , known in English as Petrarch, was an Italian scholar, poet and one of the earliest humanists. Petrarch is often called the "Father of Humanism"...
, who spent four years at Montpellier, and among its lecturers Guillaume de Nogaret
Guillaume de Nogaret
Guillaume de Nogaret or William of Nogaret was councillor and keeper of the seal to Philip IV of France.- Early life :...
, chancellor to Philip the Fair
Philip IV of France
Philip the Fair was, as Philip IV, King of France from 1285 until his death. He was the husband of Joan I of Navarre, by virtue of which he was, as Philip I, King of Navarre and Count of Champagne from 1284 to 1305.-Youth:A member of the House of Capet, Philip was born at the Palace of...
, Guillaume de Grimoard, afterwards pope under the name of Urban V, and Pedro de Luna, antipope as Benedict XIII. But after the 15th century this faculty fell into decay, as did also the faculty of arts, although for a time, under Henry IV of France
Henry IV of France
Henry IV , Henri-Quatre, was King of France from 1589 to 1610 and King of Navarre from 1572 to 1610. He was the first monarch of the Bourbon branch of the Capetian dynasty in France....
, the latter faculty had among its lecturers Casaubon.

The Montpellier school of medicine owed its success to the ruling of the Guilhems, lords of the town, by which any licensed physician might lecture there; there was no fixed limit to the number of teachers, lectures were multiplied, and there was a great wealth of teaching. Rabelais took his medical degrees at Montpellier. It was in this school that the biological theory of vitalism
Vitalism
Vitalism, as defined by the Merriam-Webster dictionary, is#a doctrine that the functions of a living organism are due to a vital principle distinct from biochemical reactions...
, elaborated by Barthez
Paul Joseph Barthez
Paul Joseph Barthez was a French physician, physiologist, and encyclopedist who developed a take on the biological theory known as vitalism....
(1734–1806), had its origin. The French Revolution did not interrupt the existence of the faculty of medicine.

The faculties of science and of letters were re-established in 1810; that of law in 1880. It was on the occasion of the sixth centenary of the university, celebrated in 1889, that the Government of France announced its intention – which has since been realized – of reorganizing the provincial universities in France.

Montpellier is served by railway, including TGV
TGV
The TGV is France's high-speed rail service, currently operated by SNCF Voyages, the long-distance rail branch of SNCF, the French national rail operator....
highspeed trains. Montpellier's main railway station is Saint-Roch. There are plans to construct a high-speed railway
Contournement Nîmes - Montpellier
The Contournement Nîmes-Montpellier is a high speed railway project, bypassing the cities of Nîmes and Montpellier in southern France.The railway is planned to be mixed-use, with both TGV trains and freight; it would be 60-80km long, and would connect to the LGV Méditerranée and extend it southwest...
linking Nîmes
Nîmes
Nîmes is the capital of the Gard department in the Languedoc-Roussillon region in southern France. Nîmes has a rich history, dating back to the Roman Empire, and is a popular tourist destination.-History:...
and Montpellier with the LGV Méditerranée
LGV Méditerranée
The LGV Méditerranée is a French high speed railway line of approximately 250 km length, which entered service in June, 2001. Running between Saint-Marcel-lès-Valence and Marseille, it connects the regions of Provence-Alpes-Côte d'Azur and Languedoc-Roussillon to the LGV Rhône-Alpes, and from...
.

Montpellier was the finish of Stage 11 and the departure of Stage 12 in the 2007 Tour de France
2007 Tour de France
The 2007 Tour de France, the 94th running of the race, took place from 7 July to 29 July 2007. The Tour began with a prologue in London, and ended with the traditional finish in Paris. Along the way, the route also passed through Belgium and Spain...
. The city is home to a variety of professional sports teams:
The city is home to the Open Sud de France tennis tournament since 2010, and will host the XXXI World Rhythmic Gymnastics Championship.

Montpellier is twinned
Town twinning
Twin towns and sister cities are two of many terms used to describe the cooperative agreements between towns, cities, and even counties in geographically and politically distinct areas to promote cultural and commercial ties.- Terminology :...
with:

Montpellier was the birthplace of:

Other famous inhabitants include:


Other locations named after Montpellier

"Montpellier" is used as the name of other towns and streets in as many as four continents. Many places in England, Scotland, Wales and Ireland carry the name Montpellier. Often they are in resort locations claiming some of the healthy attributes for which the French city was renowned in earlier centuries. The variant spelling "Montpelier" is common, and is of quite early provenance. Brewer
Brewer's Dictionary of Phrase and Fable
Brewer's Dictionary of Phrase and Fable, sometimes referred to simply as Brewer's, is a reference work containing definitions and explanations of many famous phrases, allusions and figures, whether historical or mythical.-History:...
uses that spelling. The first example was the early 19th-century suburb of Montpelier
Montpelier, Brighton
Montpelier is an inner suburban area of Brighton, part of the English city and seaside resort of Brighton and Hove. Developed together with the adjacent Clifton Hill area in the mid-19th century, it forms a high-class, architecturally cohesive residential district with "an exceptionally complete...
in Brighton
Brighton
Brighton is the major part of the city of Brighton and Hove in East Sussex, England on the south coast of Great Britain...
.

Secondary Montpelliers/Montpeliers are also found in Australia, Canada, South Africa, and the Caribbean.

The capital of the American state of Vermont
Vermont
Vermont is a state in the New England region of the northeastern United States of America. The state ranks 43rd in land area, , and 45th in total area. Its population according to the 2010 census, 630,337, is the second smallest in the country, larger only than Wyoming. It is the only New England...
was named Montpelier
Montpelier, Vermont
Montpelier is a city in the U.S. state of Vermont that serves as the state capital and the shire town of Washington County. As the capital of Vermont, Montpelier is the site of the Vermont State House, seat of the legislative branch of Vermont government. The population was 7,855 at the 2010...
because of the high regard held by the Americans for the French who aided their Revolutionary War
American Revolutionary War
The American Revolutionary War , the American War of Independence, or simply the Revolutionary War, began as a war between the Kingdom of Great Britain and thirteen British colonies in North America, and ended in a global war between several European great powers.The war was the result of the...
against the British
Kingdom of Great Britain
The former Kingdom of Great Britain, sometimes described as the 'United Kingdom of Great Britain', That the Two Kingdoms of Scotland and England, shall upon the 1st May next ensuing the date hereof, and forever after, be United into One Kingdom by the Name of GREAT BRITAIN. was a sovereign...
. Several other American cities are also named Montpelier.