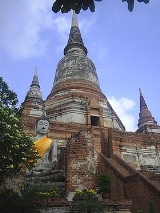 Encyclopedia
Ayutthaya city is the capital of Ayutthaya province
Ayutthaya Province
Phra Nakhon Si Ayutthaya is one of the central provinces of Thailand. Neighboring provinces are Ang Thong, Lop Buri, Saraburi, Pathum Thani, Nonthaburi, Nakhon Pathom and Suphan Buri....
in Thailand
Thailand
Thailand , officially the Kingdom of Thailand , formerly known as Siam , is a country located at the centre of the Indochina peninsula and Southeast Asia. It is bordered to the north by Burma and Laos, to the east by Laos and Cambodia, to the south by the Gulf of Thailand and Malaysia, and to the...
. Located in the valley of the Chao Phraya River
Chao Phraya River
The Chao Phraya is a major river in Thailand, with its low alluvial plain forming the centre of the country. It runs through Bangkok, the capital city, and then empties into the Gulf of Thailand.-Etymology:...
. The city was founded in 1350 by King U Thong
Ramathibodi I
Uthong or Ramathibodi I was the first king of the kingdom Ayutthaya , reigning from 1351 to 1369. He was known as Prince U Thong before he ascended to the throne on March 4, 1351...
, who went there to escape a smallpox
Smallpox
Smallpox was an infectious disease unique to humans, caused by either of two virus variants, Variola major and Variola minor. The disease is also known by the Latin names Variola or Variola vera, which is a derivative of the Latin varius, meaning "spotted", or varus, meaning "pimple"...
outbreak in Lop Buri and proclaimed it the capital of his kingdom, often referred to as the Ayutthaya kingdom
Ayutthaya kingdom
Ayutthaya was a Siamese kingdom that existed from 1350 to 1767. Ayutthaya was friendly towards foreign traders, including the Chinese, Vietnamese , Indians, Japanese and Persians, and later the Portuguese, Spanish, Dutch and French, permitting them to set up villages outside the walls of the...
or Siam. Ayutthaya became the second Siamese capital after Sukhothai. Its remains, characterized by the prang (reliquary towers) and gigantic monasteries, give an idea of its past splendour. It is estimated that Ayutthaya by the year 1600 CE had a population of about 300,000, with the population perhaps reaching 1,000,000 around 1700 CE, making it one of the world's largest cities at that time. In 1767, the city was destroyed by the Burmese army, resulting in the collapse of the kingdom. The Ayutthaya historical park
Ayutthaya historical park
The Ayutthaya historical park covers the ruins of the old city of Ayutthaya, Thailand, which was founded by King Ramathibodi I in 1350 and was the capital of the country until its destruction by the Burmese army in 1767....
is the ruins of the former capital of the Kingdom of Siam. It is the site of mass murder, rape and enslavement of Siamese people and destruction of the Ayutthaya city, its art and buildings by the Burmese in 1767, which is recognized internationally as a UNESCO
UNESCO
The United Nations Educational, Scientific and Cultural Organization is a specialized agency of the United Nations...
World Heritage Site
World Heritage Site
A UNESCO World Heritage Site is a place that is listed by the UNESCO as of special cultural or physical significance...
. The city was refounded a few kilometers to the east. The city is sometimes called "Venice of the East".

Ayutthaya is named after the city of Ayodhya in India
India
India , officially the Republic of India , is a country in South Asia. It is the seventh-largest country by geographical area, the second-most populous country with over 1.2 billion people, and the most populous democracy in the world...
, the birthplace of Rama
Rama
Rama or full name Ramachandra is considered to be the seventh avatar of Vishnu in Hinduism, and a king of Ayodhya in ancient Indian...
in the Ramayana
Ramayana
The Ramayana is an ancient Sanskrit epic. It is ascribed to the Hindu sage Valmiki and forms an important part of the Hindu canon , considered to be itihāsa. The Ramayana is one of the two great epics of India and Nepal, the other being the Mahabharata...
(Thai
Thai language
Thai , also known as Central Thai and Siamese, is the national and official language of Thailand and the native language of the Thai people, Thailand's dominant ethnic group. Thai is a member of the Tai group of the Tai–Kadai language family. Historical linguists have been unable to definitively...
, Ramakien
Ramakien
The Ramakian is Thailand's national epic, derived from the Hindu epic Ramayana....
); is a Thai royal and noble title
Thai royal and noble titles
Thai royal and noble titles are the royal and noble styles signifying relationship to the King introduced by King Trailokanat, who reigned 1448 to 1488. The system is rooted in the Thai language equivalent of feudalism, .It is somewhat similar to that of peerage, but is complicated and usually not...
; designates an important or capital city; Thai honorific Sri or Si is from the Indian term of veneration Sri
Sri
Sri , also transliterated as Shri or Shree or shre is a word of Sanskrit origin, used in the Indian subcontinent as polite form of address equivalent to the English "Mr." in written and spoken language, or as a title of veneration for deities .-Etymology:Sri has the root meaning of radiance, or...
.

The city is located at the junction of the Chao Phraya, Lopburi
Lopburi River
The Lopburi River is a tributary of the Chao Phraya River in central Thailand. It splits from the Chao Phraya river at Tambon Bang Phutsa, Singburi. Passing through Tha Wung district and the town of Lopburi, it enters the Chao Phraya together with the Pa Sak River at the town of Ayutthaya. It is...
and Pa Sak
Pa Sak River
The Pa Sak River is a river in central Thailand. The river originates in Dan Sai District, Loei Province, passes through Phetchabun Province as the backbone of the Province...
rivers, and on the main north-south railway linking Chiang Mai
Chiang Mai
Chiang Mai sometimes written as "Chiengmai" or "Chiangmai", is the largest and most culturally significant city in northern Thailand. It is the capital of Chiang Mai Province , a former capital of the Kingdom of Lanna and was the tributary Kingdom of Chiang Mai from 1774 until 1939. It is...
to Bangkok
Bangkok
Bangkok is the capital and largest urban area city in Thailand. It is known in Thai as Krung Thep Maha Nakhon or simply Krung Thep , meaning "city of angels." The full name of Bangkok is Krung Thep Mahanakhon Amon Rattanakosin Mahintharayutthaya Mahadilok Phop Noppharat Ratchathani Burirom...
. The old city is on an island formed by a bend of the Chao Phraya on the west and south sides, the Pa Sak on the east side and the Klong Muang canal on the northern side.