Encyclopedia
Rancagua is a city and commune in central Chile
Chile
Chile ,officially the Republic of Chile , is a country in South America occupying a long, narrow coastal strip between the Andes mountains to the east and the Pacific Ocean to the west. It borders Peru to the north, Bolivia to the northeast, Argentina to the east, and the Drake Passage in the far...
, part of the Rancagua conurbation
Rancagua conurbation
Rancagua conurbation or Greater Rancagua is a Chilean conurbation in the O'Higgins Region composed by Rancagua and some parts of Machalí and Gultro. Is has an estimated population of 307,004 inhabitants for 2008. Several villages are expected to join the conurbation in a near future like Olivar...
. It is the capital of the Cachapoal Province
Cachapoal Province
Cachapoal Province is one of three provinces of the central Chilean region of O'Higgins . Its capital is the city of Rancagua .-Geography and demography:...
and of the O'Higgins Region, located 87 km (54 mi) south of the national capital of Santiago
Santiago
Santiago is the capital city of Chile. Santiago may also refer to:*Santiago *Santiago , a Spanish given name*Santiago!, a shortened form of the Reconquista battle cry "Santiago y cierra, España"...
. It had a 2002 population of 214,344. The main economic activities range from mining activity, tourism, agriculture, wood industry, food production and services to minor industrial activities. The city also serves as the administrative and legal center of the region. 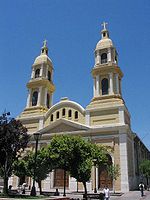 The city is famous in Chilean history
History of Chile
The territory of Chile has been populated since at least 2,000 BC. By the 16th century, Spanish conquistadors began to subdue and colonize the region of present-day Chile, and the territory became a colony from 1540 to 1818, when it gained independence from Spain...
as the scene of the Disaster of Rancagua
Disaster of Rancagua
The Battle of Rancagua, also known as the Disaster of Rancagua occurred in October 1814 when the Spanish under Mariano Osorio defeated rebel Chilean forces....
of 1814, when Chilean forces fighting for independence from Spain
Spain
Spain , officially the Kingdom of Spain languages]] under the European Charter for Regional or Minority Languages. In each of these, Spain's official name is as follows:;;;;;;), is a country and member state of the European Union located in southwestern Europe on the Iberian Peninsula...
were defeated, marking the beginning of the period known as the Reconquista (an attempt by Spain to regain control of Chile).

In the wake of the 27 February 2010 earthquake
2010 Chile earthquake
The 2010 Chile earthquake occurred off the coast of central Chile on Saturday, 27 February 2010, at 03:34 local time , having a magnitude of 8.8 on the moment magnitude scale, with intense shaking lasting for about three minutes. It ranks as the sixth largest earthquake ever to be recorded by a...
, Cuba set up a temporary hospital in the city with a medical brigade of 27 doctors and 9 staff.

In recent years the city has become one of the most attractive cultural and tourist centers in the O'Higgins Region mainly due to the vineyards in the area. There are also some archeological sites, sport centers and easy access to smaller and more typical villages and towns.

The city connects with Santiago via the Panamerican Highway
Pan-American Highway
The Pan-American Highway is a network of roads measuring about in total length. Except for an rainforest break, called the Darién Gap, the road links the mainland nations of the Americas in a connected highway system. According to Guinness World Records, the Pan-American Highway is the world's...
(Chile Route 5). The Metrotren
Metrotrén
The Metrotrén , is a Chilean commuter rail system operated by Trenes Metropolitanos S.A., a subsidiary of the Empresa de los Ferrocarriles del Estado , that covers 13 communes, from Santiago de Chile to San Fernando. It is connected with Metro de Santiago in Alameda station...
connects the metro service
Santiago Metro
Metro de Santiago is South America's most extensive metro system with 5 lines, 108 stations and 103 kilometres of track making it the second longest in Latin America after that of Mexico City. The metro system serves the city of Santiago, Chile. Three of the lines are rubber-tyred...
in Santiago to Rancagua by train.

Rancagua is home of the University of Rancagua, the first private university to be established in the O'Higgins Region.

The city's Braden Copper Stadium was one of the four venues of the 1962 football (soccer) World Cup
1962 FIFA World Cup
The 1962 FIFA World Cup, the seventh staging of the World Cup, was held in Chile from 30 May to 17 June. It was won by Brazil, who retained the championship by beating Czechoslovakia 3–1 in the final...
. Nowadays, it houses the O'Higgins
Club Deportivo O'Higgins
Club Deportivo O'Higgins, is a Chilean football club based in the city of Rancagua. The club was founded on April 7, 1955 following the merger of the clubs America and O'Higgins Braden, and plays in the first division of the Chilean football league. The club was previously called PARHS FC...
professional soccer club, one of the leading teams in Chilean professional soccer. In this city every year takes place the National Championship
Campeonato Nacional de Rodeo
The National Championship of Chilean Rodeo is the highest-level rodeo competition in Chile.*Place: Medialuna de Rancagua*City: Rancagua*Riders with more titles: Ramón Cardemil and Juan Carlos Loaiza...
of Chilean rodeo
Chilean rodeo
Rodeo is a traditional sport in Chile. It was declared the national sport in 1962. It has since thrived, especially in the more rural areas of the country. Chilean rodeo is different from the rodeo found in North America...
in the Medialuna Monumental de Rancagua.

According to the 2002 census
Census
A census is the procedure of systematically acquiring and recording information about the members of a given population. It is a regularly occurring and official count of a particular population. The term is used mostly in connection with national population and housing censuses; other common...
of the National Statistics Institute
National Statistics Institute (Chile)
The National Statistics Institute of Chile is a state-run organization of the Government of Chile, created in the second half of the 19th century and tasked with performing a general census of population and housing, then collecting, producing and publishing official demographic statistics of...
, Rancagua spans an area of 260.3 sqkm and has 214,344 inhabitants (104,879 men and 109,465 women). Of these, 206,971 (96.6%) lived in urban area
Urban area
An urban area is characterized by higher population density and vast human features in comparison to areas surrounding it. Urban areas may be cities, towns or conurbations, but the term is not commonly extended to rural settlements such as villages and hamlets.Urban areas are created and further...
s and 7,373 (3.4%) in rural areas. The population grew by 14.4% (27,020 persons) between the 1992 and 2002 censuses.

As a commune, Rancagua is a third-level administrative division of Chile administered by a municipal council
Municipal council
A municipal council is the local government of a municipality. Specifically the term can refer to the institutions of various countries that can be translated by this term...
, headed by an alcalde
Alcalde
Alcalde , or Alcalde ordinario, is the traditional Spanish municipal magistrate, who had both judicial and administrative functions. An alcalde was, in the absence of a corregidor, the presiding officer of the Castilian cabildo and judge of first instance of a town...
who is directly elected every four years.

Within the electoral divisions of Chile, Rancagua is represented in the Chamber of Deputies
Chamber of Deputies of Chile
The Chamber of Deputies of the Republic of Chile is the lower house of Chile's bicameral Congress. Its organisation and its powers and duties are defined in articles 42 to 59 of Chile's current constitution....
by Mr. Alejandro García-Huidobro (UDI) and Mr. Juan Luis Castro (PS
Socialist Party of Chile
The Socialist Party of Chile is a political party, that is part of the center-left Coalition of Parties for Democracy coalition. Its historical leader was the late President of Chile Salvador Allende Gossens, who was deposed by General Pinochet in 1973...
) as part of the 32nd electoral district, which consist entirely of the Rancagua commune. The commune is represented in the Senate
Senate of Chile
The Senate of the Republic of Chile is the upper house of Chile's bicameral National Congress, as established in the current Constitution of Chile.-Composition:...
by Andrés Chadwick Piñera (UDI) and Juan Pablo Letelier Morel (PS) as part of the 9th senatorial constituency (O'Higgins Region).