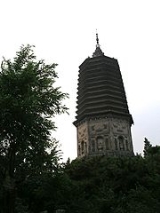 Encyclopedia
Liaoyang is a city in China, Liaoning
Liaoning
' is a province of the People's Republic of China, located in the northeast of the country. Its one-character abbreviation is "辽" , a name taken from the Liao River that flows through the province. "Níng" means "peace"...
province, located in the middle of the Liaodong Peninsula. The city is situated on the T'ai-tzu River and forms with Anshan a built up area of 2,057,200 inhabitants in 2010.
It is approximately one hour south of Shenyang
Shenyang
Shenyang , or Mukden , is the capital and largest city of Liaoning Province in Northeast China. Currently holding sub-provincial administrative status, the city was once known as Shengjing or Fengtianfu...
by car. Liaoyang is home to Liaoning University's College of Foreign Studies and a number of vocational colleges. The city hosts a limited number of professional basketball and volleyball games in a modern sports facility.

Liaoyang is one of the oldest continuously-inhabited cities in northeast China. The city has a number of sites of historical interest. Among these is the White Pagoda (baita), which dates back to the Yuan dynasty
Yuan Dynasty
The Yuan Dynasty , or Great Yuan Empire was a ruling dynasty founded by the Mongol leader Kublai Khan, who ruled most of present-day China, all of modern Mongolia and its surrounding areas, lasting officially from 1271 to 1368. It is considered both as a division of the Mongol Empire and as an...
. The Liaoyang White Pagoda sits in White Pagoda Park.

Between 1621 and 1625, Liaoyang (then called Dongjing) was the capital of the Later Jin Dynasty, which at the time already ruled all of Manchuria
Manchuria
Manchuria is a historical name given to a large geographic region in northeast Asia. Depending on the definition of its extent, Manchuria usually falls entirely within the People's Republic of China, or is sometimes divided between China and Russia. The region is commonly referred to as Northeast...
(Dongbei, i.e., "the Northeast", in Chinese) and was to change its name to Qing
Qing Dynasty
The Qing Dynasty was the last dynasty of China, ruling from 1644 to 1912 with a brief, abortive restoration in 1917. It was preceded by the Ming Dynasty and followed by the Republic of China....
soon. The Emperor Nurhaci
Nurhaci
Nurhaci was an important Jurchen chieftain who rose to prominence in the late sixteenth century in what is today Northeastern China...
moved the capitol to Shenyang in 1625.

Within Liaoyang prefecture there is 1 county, 5 districts and 1 city. 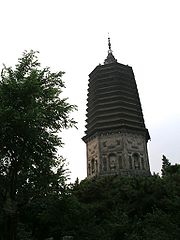 Although the lack of greenspace throughout the city is noticeable, there are a few historical sites to be visited. The LiaoYang museum - built in 1921 and open to public since 1984 - contains many antiques. The temple surrounding BaiTa (White Pagoda) was destroyed during WWII and recreated to become one of LiaoYang's main tourism attraction in recent years. Other tourist attractions in LiaoYang include memorial sites and old cities. In the downtown area busy shopping malls can be found. The shopping area includes a total of 5 malls and traffic-free streets with many Chinese brand name stores. Within the malls, you can find unique stores and cheap goods. On the streets, there are many interesting and delicious regional snacks. Also in the shopping area is a street with many Korean BBQ restaurants (street name?). Further afield, you'll find many more different types of Chinese restaurants including Huo Jia Jiaozi, a traditional dumpling restaurant. Also look for Ming Du Sangna, a place where the wealthy elite meet for a bath.

Liaoyang is headquarters of the 39th Mechanized Group Army
39th Army (People's Republic of China)
The 39th Army is a group army, a formation of roughly corps strength, of the People's Liberation Army.The Army was a military formation of the People's Volunteer Army during the Korean War...
of the People's Liberation Army
People's Liberation Army
The People's Liberation Army is the unified military organization of all land, sea, strategic missile and air forces of the People's Republic of China. The PLA was established on August 1, 1927 — celebrated annually as "PLA Day" — as the military arm of the Communist Party of China...
, one of the three group armies that comprise the Shenyang Military Region
Shenyang Military Region
The Shenyang Military Region |16th Group Army]], with three divisions, including an armoured division, in Jilin, the 23rd Group Army headquartered at Harbin, and the 39th Group Army in Liaoning.-Current Officers:* Zhang Youxia , since October 2007...
responsible for defending China's northeastern borders with Russia
Russia
Russia or , officially known as both Russia and the Russian Federation , is a country in northern Eurasia. It is a federal semi-presidential republic, comprising 83 federal subjects...
and North Korea
North Korea
The Democratic People’s Republic of Korea , , is a country in East Asia, occupying the northern half of the Korean Peninsula. Its capital and largest city is Pyongyang. The Korean Demilitarized Zone serves as the buffer zone between North Korea and South Korea...
.

Liaoyang is twinned
Town twinning
Twin towns and sister cities are two of many terms used to describe the cooperative agreements between towns, cities, and even counties in geographically and politically distinct areas to promote cultural and commercial ties.- Terminology :...
with: Los Gatos, California
Los Gatos, California
The Town of Los Gatos is an incorporated town in Santa Clara County, California, United States. The population was 29,413 at the 2010 census. It is located in the San Francisco Bay Area at the southwest corner of San Jose in the foothills of the Santa Cruz Mountains...
, United States
United States
The United States of America is a federal constitutional republic comprising fifty states and a federal district...
Haman
Haman County
Haman County is a county in South Gyeongsang Province, South Korea. The local government is seated in Gaya-eup. The county magistrate is Seok Gyu Jin....
, South Korea
South Korea
The Republic of Korea , , is a sovereign state in East Asia, located on the southern portion of the Korean Peninsula. It is neighbored by the People's Republic of China to the west, Japan to the east, North Korea to the north, and the East China Sea and Republic of China to the south...