Encyclopedia
Greater Buenos Aires is the generic denomination to refer to the megalopolis
Megalopolis (city type)
A megalopolis is typically defined as a chain of roughly adjacent metropolitan areas. The term was used by Oswald Spengler in his 1918 book, The Decline of the West, and Lewis Mumford in his 1938 book, The Culture of Cities, which described it as the first stage in urban overdevelopment and...
comprising the autonomous city of Buenos Aires
Buenos Aires
Buenos Aires is the capital and largest city of Argentina, and the second-largest metropolitan area in South America, after São Paulo. It is located on the western shore of the estuary of the Río de la Plata, on the southeastern coast of the South American continent...
and the conurbation
Conurbation
A conurbation is a region comprising a number of cities, large towns, and other urban areas that, through population growth and physical expansion, have merged to form one continuous urban and industrially developed area...
around it, over the province of Buenos Aires—namely the adjacent 24 partidos or municipalities—which nonetheless do not constitute a single administrative unit. The conurbation spreads to the south, west and north of Buenos Aires; to the east the River Plate
Río de la Plata
The Río de la Plata —sometimes rendered River Plate in British English and the Commonwealth, and occasionally rendered [La] Plata River in other English-speaking countries—is the river and estuary formed by the confluence of the Uruguay River and the Paraná River on the border between Argentina and...
serves as a natural boundary.

Urban sprawl
Urban sprawl
Urban sprawl, also known as suburban sprawl, is a multifaceted concept, which includes the spreading outwards of a city and its suburbs to its outskirts to low-density and auto-dependent development on rural land, high segregation of uses Urban sprawl, also known as suburban sprawl, is a...
, especially between 1945 and 1980, created a vast conurbation of 9,910,282 inhabitants in the 24 conurbated partidos, as of 2010, and a total of 12,801,365 including the City of Buenos Aires, a third of the total population of Argentina
Demographics of Argentina
This article is about the demographic features of Argentina, including population density, ethnicity, economic status and other aspects of the population....
. 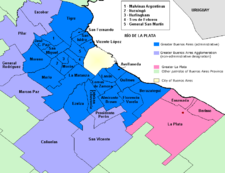 The National Institute of Statistics and Censuses (Instituto Nacional de Estadística y Censos), INDEC, has defined Greater Buenos Aires to be comprised by:
There are three main groups within the Buenos Aires' Conurbation. The first two groups (24 partidos) comprise the traditional conurbation, or the "conurbation proper". The third group of six partidos is in process of becoming fully integrated with the rest. 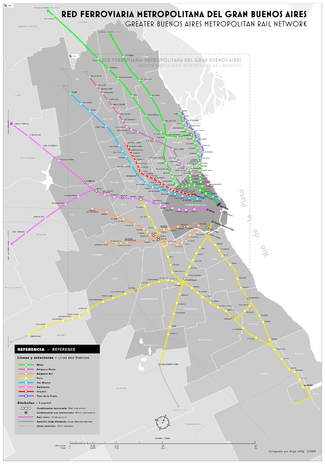