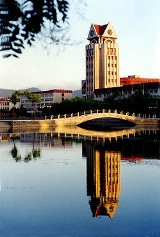 The largest fishing seaport in Shandong and a robust economic center today, Yantai used to be known to the West
Western world
The Western world, also known as the West and the Occident , is a term referring to the countries of Western Europe , the countries of the Americas, as well all countries of Northern and Central Europe, Australia and New Zealand...
as Chefoo, a misnomer which refers, in Chinese, solely to Zhifu Island
Zhifu Island
Zhifu Island or North Island , is an islet with historical significance in Shandong Province, China. The name of the islet Chefoo was generalized to mean the entire Yantai region in older western literature.* Area: 11.5 km²* Coast line: 22.5 km...
, which is historically governed by Yantai.

The contemporary name of Yantai came from the watchtowers constructed on Mount Qi in 1398, during the reign of the Hongwu Emperor
Hongwu Emperor
The Hongwu Emperor , known variably by his given name Zhu Yuanzhang and by his temple name Taizu of Ming , was the founder and first emperor of the Ming Dynasty of China...
, founding emperor of the Ming Dynasty
Ming Dynasty
The Ming Dynasty, also Empire of the Great Ming, was the ruling dynasty of China from 1368 to 1644, following the collapse of the Mongol-led Yuan Dynasty. The Ming, "one of the greatest eras of orderly government and social stability in human history", was the last dynasty in China ruled by ethnic...
(yan—smoke; tai—tower).

Any one from Yantai can tell me the life in general for the people who are living in Yantai currently? Job situation for aged (50+)? Why so many...
More
x