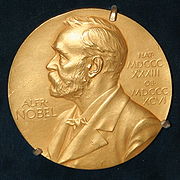 Laureates have won the Nobel Prize in a wide range of fields that relate to physiology or medicine. As of 2009, 8 Prizes have been awarded for contributions in the field of signal transduction by G proteins and second messengers, 13 have been awarded for contributions in the field of neurobiology and 13 have been awarded for contributions in Intermediary Metabolism
Metabolism
Metabolism is the set of chemical reactions that happen in the cells of living organisms to sustain life. These processes allow organisms to grow and reproduce, maintain their structures, and respond to their environments. Metabolism is usually divided into two categories...
. Gerhard Domagk (1939), a German, was not allowed by his government to accept the prize. He later received a medal and diploma, but not the money. Ten women have won the prize: Gerty Cori
Gerty Cori
Gerty Theresa Cori was an American biochemist who became the third woman—and first American woman—to win a Nobel Prize in science, and the first woman to be awarded the Nobel Prize in Physiology or Medicine.Cori was born in Prague...
(1947), Rosalyn Yalow
Rosalyn Sussman Yalow
Rosalyn Sussman Yalow was an American medical physicist, and a co-winner of the 1977 Nobel Prize in Physiology or Medicine for development of the radioimmunoassay technique...
(1977), Barbara McClintock
Barbara McClintock
Barbara McClintock , the 1983 Nobel Laureate in Physiology or Medicine, was an American scientist and one of the world's most distinguished cytogeneticists. McClintock received her PhD in botany from Cornell University in 1927, where she was a leader in the development of maize cytogenetics...
(1983), Rita Levi-Montalcini
Rita Levi-Montalcini
Rita Levi-Montalcini , Knight Grand Cross is an Italian neurologist who, together with colleague Stanley Cohen, received the 1986 Nobel Prize in Physiology or Medicine for their discovery of nerve growth factor...
(1986), Gertrude B. Elion (1988), Christiane Nüsslein-Volhard
Christiane Nüsslein-Volhard
Christiane Nüsslein-Volhard is a German biologist who won the Albert Lasker Award for Basic Medical Research in 1991 and the Nobel Prize in Physiology or Medicine in 1995, together with Eric Wieschaus and Edward B...
(1995), Linda B. Buck
Linda B. Buck
Linda Brown Buck is an American biologist best known for her work on the olfactory system. She was awarded the 2004 Nobel Prize in Physiology or Medicine, along with Richard Axel, for their work on olfactory receptors....
(2004), Françoise Barré-Sinoussi
Françoise Barré-Sinoussi
Françoise Barré-Sinoussi is a French virologist and director of the Unité de Régulation des Infections Rétrovirales at the Institut Pasteur in Paris, France. Born in Paris, France, Barré-Sinoussi performed some of the fundamental work in the identification of the human immunodeficiency virus as...
(2008), Elizabeth H. Blackburn (2009) and Carol W. Greider
Carol W. Greider
Carolyn Widney "Carol" Greider is an American molecular biologist. She is Daniel Nathans Professor and Director of Molecular Biology and Genetics at Johns Hopkins University. She discovered the enzyme telomerase in 1984, when she was a graduate student of Elizabeth Blackburn at the University of...
(2009). As of 2011, the prize has been awarded to 199 individuals. There have been nine years in which the Nobel Prize in Physiology or Medicine was not awarded (1915–1918, 1921, 1925, 1940–1942).