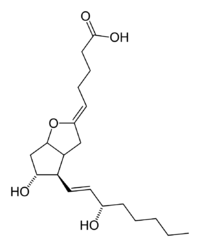 A prostaglandin is any member of a group of lipid
Lipid
Lipids constitute a broad group of naturally occurring molecules that include fats, waxes, sterols, fat-soluble vitamins , monoglycerides, diglycerides, triglycerides, phospholipids, and others...
compounds that are derived enzymatically from fatty acid
Fatty acid
In chemistry, especially biochemistry, a fatty acid is a carboxylic acid with a long unbranched aliphatic tail , which is either saturated or unsaturated. Most naturally occurring fatty acids have a chain of an even number of carbon atoms, from 4 to 28. Fatty acids are usually derived from...
s and have important functions in the animal
Animal
Animals are a major group of multicellular, eukaryotic organisms of the kingdom Animalia or Metazoa. Their body plan eventually becomes fixed as they develop, although some undergo a process of metamorphosis later on in their life. Most animals are motile, meaning they can move spontaneously and...
body. Every prostaglandin contains 20 carbon
Carbon
Carbon is the chemical element with symbol C and atomic number 6. As a member of group 14 on the periodic table, it is nonmetallic and tetravalent—making four electrons available to form covalent chemical bonds...
atoms, including a 5-carbon ring.

They are mediators and have a variety of strong physiological
Physiology
Physiology is the science of the function of living systems. This includes how organisms, organ systems, organs, cells, and bio-molecules carry out the chemical or physical functions that exist in a living system. The highest honor awarded in physiology is the Nobel Prize in Physiology or...
effects, such as regulating the contraction and relaxation of smooth muscle tissue. Prostaglandins are not endocrine hormone
Hormone
A hormone is a chemical released by a cell or a gland in one part of the body that sends out messages that affect cells in other parts of the organism. Only a small amount of hormone is required to alter cell metabolism. In essence, it is a chemical messenger that transports a signal from one...
s, but autocrine or paracrine, which are locally acting messenger molecules. They differ from hormones in that they are not produced at a discrete site but in many places throughout the human body. Also, their target cells are present in the immediate vicinity of the site of their secretion
Secretion
Secretion is the process of elaborating, releasing, and oozing chemicals, or a secreted chemical substance from a cell or gland. In contrast to excretion, the substance may have a certain function, rather than being a waste product...
(of which there are many).

The prostaglandins, together with the thromboxane
Thromboxane
Thromboxane is a member of the family of lipids known as eicosanoids. The two major thromboxanes are thromboxane A2 and thromboxane B2. The distinguishing feature of thromboxanes is a 6-membered ether-containing ring....
s and prostacyclin
Prostacyclin
Prostacyclin is a member of the family of lipid molecules known as eicosanoids.As a drug, it is also known as "epoprostenol". The terms are sometimes used interchangeably.-History:...
s, form the prostanoid
Prostanoid
Prostanoid is the term used to describe a subclass of eicosanoids consisting of: the prostaglandins , the thromboxanes and the prostacyclins - Biosynthesis : Cyclooxygenase catalyzes the conversion of the free essential fatty acids to...
class of fatty acid derivatives, a subclass of eicosanoid
Eicosanoid
In biochemistry, eicosanoids are signaling molecules made by oxidation of twenty-carbon essential fatty acids, ....
s.

The name prostaglandin derives from the prostate gland. When prostaglandin was first isolated from seminal fluid in 1935 by the Swedish physiologist
Physiology
Physiology is the science of the function of living systems. This includes how organisms, organ systems, organs, cells, and bio-molecules carry out the chemical or physical functions that exist in a living system. The highest honor awarded in physiology is the Nobel Prize in Physiology or...
Ulf von Euler
Ulf von Euler
Ulf Svante von Euler was a Swedish physiologist and pharmacologist. He won a Nobel Prize in Physiology or Medicine in 1970 for his work on neurotransmitters.-Life:...
, and independently by M.W. Goldblatt, it was believed to be part of the prostatic secretions. (In fact, prostaglandins are produced by the seminal vesicles). It was later shown that many other tissues secrete prostaglandins for various functions. The first total syntheses
Total synthesis
In organic chemistry, a total synthesis is, in principle, the complete chemical synthesis of complex organic molecules from simpler pieces, usually without the aid of biological processes. In practice, these simpler pieces are commercially available in bulk and semi-bulk quantities, and are often...
of prostaglandin F2α and prostaglandin E2 were reported by E. J. Corey in 1969, an achievement for which he was awarded the Japan Prize
Japan Prize
is awarded to people from all parts of the world whose "original and outstanding achievements in science and technology are recognized as having advanced the frontiers of knowledge and served the cause of peace and prosperity for mankind."- Explanation :...
in 1989.

In 1971, it was determined that aspirin
Aspirin
Aspirin , also known as acetylsalicylic acid , is a salicylate drug, often used as an analgesic to relieve minor aches and pains, as an antipyretic to reduce fever, and as an anti-inflammatory medication. It was discovered by Arthur Eichengrun, a chemist with the German company Bayer...
-like drugs could inhibit the synthesis of prostaglandins. The biochemist
Biochemist
Biochemists are scientists who are trained in biochemistry. Typical biochemists study chemical processes and chemical transformations in living organisms. The prefix of "bio" in "biochemist" can be understood as a fusion of "biological chemist."-Role:...
s Sune K. Bergström, Bengt I. Samuelsson
Bengt I. Samuelsson
-External links:**...
and John R. Vane jointly received the 1982 Nobel Prize in Physiology or Medicine
Nobel Prize in Physiology or Medicine
The Nobel Prize in Physiology or Medicine administered by the Nobel Foundation, is awarded once a year for outstanding discoveries in the field of life science and medicine. It is one of five Nobel Prizes established in 1895 by Swedish chemist Alfred Nobel, the inventor of dynamite, in his will...
for their research on prostaglandins. 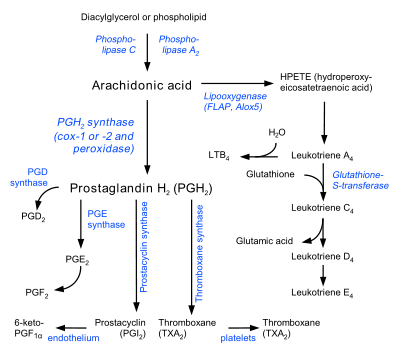 Prostaglandins are found in most tissues and organs. They are produced by almost all nucleated cells. They are autocrine and paracrine lipid mediators that act upon platelet
Platelet
Platelets, or thrombocytes , are small,irregularly shaped clear cell fragments , 2–3 µm in diameter, which are derived from fragmentation of precursor megakaryocytes.  The average lifespan of a platelet is normally just 5 to 9 days...
s, endothelium
Endothelium
The endothelium is the thin layer of cells that lines the interior surface of blood vessels, forming an interface between circulating blood in the lumen and the rest of the vessel wall. These cells are called endothelial cells. Endothelial cells line the entire circulatory system, from the heart...
, uterine
Uterus
The uterus or womb is a major female hormone-responsive reproductive sex organ of most mammals including humans. One end, the cervix, opens into the vagina, while the other is connected to one or both fallopian tubes, depending on the species...
and mast cell
Mast cell
A mast cell is a resident cell of several types of tissues and contains many granules rich in histamine and heparin...
s. They are synthesized in the cell from the essential fatty acid
Essential fatty acid
Essential fatty acids, or EFAs, are fatty acids that humans and other animals must ingest because the body requires them for good health but cannot synthesize them...
s (EFAs).

An intermediate is created from phospholipase-A2
Phospholipase A2
Phospholipases A2 are enzymes that release fatty acids from the second carbon group of glycerol. This particular phospholipase specifically recognizes the sn-2 acyl bond of phospholipids and catalytically hydrolyzes the bond releasing arachidonic acid and lysophospholipids...
, then brought out of one of either the cyclooxygenase pathway
Cyclooxygenase
Cyclooxygenase is an enzyme that is responsible for formation of important biological mediators called prostanoids, including prostaglandins, prostacyclin and thromboxane. Pharmacological inhibition of COX can provide relief from the symptoms of inflammation and pain...
or the lipoxygenase pathway
Lipoxygenase
Lipoxygenases are a family of iron-containing enzymes that catalyse the dioxygenation of polyunsaturated fatty acids in lipids containing a cis,cis-1,4- pentadiene structure. It catalyses the following reaction:...
to form either prostaglandin and thromboxane or leukotriene
Leukotriene
Leukotrienes are fatty signaling molecules. They were first found in leukocytes . One of their roles is to trigger contractions in the smooth muscles lining the trachea; their overproduction is a major cause of inflammation in asthma and allergic rhinitis...
respectively. The cyclooxygenase pathway produces thromboxane
Thromboxane
Thromboxane is a member of the family of lipids known as eicosanoids. The two major thromboxanes are thromboxane A2 and thromboxane B2. The distinguishing feature of thromboxanes is a 6-membered ether-containing ring....
, prostacyclin
Prostacyclin
Prostacyclin is a member of the family of lipid molecules known as eicosanoids.As a drug, it is also known as "epoprostenol". The terms are sometimes used interchangeably.-History:...
and prostaglandin D, E and F. The lipoxygenase enzyme pathway is inactive in leukocytes and in macrophage
Macrophage
Macrophages are cells produced by the differentiation of monocytes in tissues. Human macrophages are about in diameter. Monocytes and macrophages are phagocytes. Macrophages function in both non-specific defense as well as help initiate specific defense mechanisms of vertebrate animals...
s and synthesizes leukotrienes.
>-
| Arachidonic acid
Arachidonic acid
Arachidonic acid is a polyunsaturated omega-6 fatty acid 20:4.It is the counterpart to the saturated arachidic acid found in peanut oil, Arachidonic acid (AA, sometimes ARA) is a polyunsaturated omega-6 fatty acid 20:4(ω-6).It is the counterpart to the saturated arachidic acid found in peanut oil,...
(AA) >-
| Eicosapentaenoic acid
Eicosapentaenoic acid
Eicosapentaenoic acid is an omega-3 fatty acid. In physiological literature, it is given the name 20:5. It also has the trivial name timnodonic acid...
(EPA)


Release of prostaglandins from the cell

However, while COX-1 and COX-2 are both located in the blood vessels, stomach
Stomach
The stomach is a muscular, hollow, dilated part of the alimentary canal which functions as an important organ of the digestive tract in some animals, including vertebrates, echinoderms, insects , and molluscs. It is involved in the second phase of digestion, following mastication .The stomach is...
and the kidneys, prostaglandin levels are increased by COX-2 in scenarios of inflammation
Inflammation
Inflammation is part of the complex biological response of vascular tissues to harmful stimuli, such as pathogens, damaged cells, or irritants. Inflammation is a protective attempt by the organism to remove the injurious stimuli and to initiate the healing process...
.

Terminal prostaglandin synthases have been identified that are responsible for the formation of other prostaglandins. For example, hematopoietic and lipocalin
Lipocalin
The lipocalins are a family of proteins which transport small hydrophobic molecules such as steroids, bilins, retinoids, and lipids. They share limited regions of sequence homology and a common tertiary structure architecture...
prostaglandin D synthases (hPGDS and lPGDS) are responsible for the formation of PGD2 from PGH2. Similarly, prostacyclin (PGI2) synthase (PGIS) converts PGH2 into PGI2. A thromboxane synthase (TxAS
Thromboxane-A synthase
Thromboxane A synthase 1 , also known as TBXAS1, is an enzyme that, in humans, is encoded by the TBXAS1 gene.- Function :This gene encodes a member of the cytochrome P450 superfamily of enzymes...
) has also been identified.
Prostaglandin-F synthase
Prostaglandin-F synthase
In enzymology, a prostaglandin-F synthase is an enzyme that catalyzes the chemical reaction--9alpha,11alpha,15-trihydroxyprosta-5,13-dienoate + NADP+ \rightleftharpoons --9alpha,15-dihydroxy-11-oxoprosta-5,13-dienoate + NADPH + H+...
(PGFS) catalyzes the formation of 9α,11β-PGF2α,β from PGD2 and PGF2α from PGH2 in the presence of NADPH. This enzyme has recently been crystallyzed in complex with PGD2 and bimatoprost (a synthetic analogue of PGF2α).

The diversity of receptors means that prostaglandins act on an array of cells and have a wide variety of effects such as:


Prostaglandins are potent but have a short half-life before being inactivated and excreted. Therefore, they send only paracrine (locally active) or autocrine (acting on the same cell from which it is synthesized) signals.

Examples of prostaglandin antagonists are: