In genetic engineering
Genetic engineering
Genetic engineering, also called genetic modification, is the direct human manipulation of an organism's genome using modern DNA technology. It involves the introduction of foreign DNA or synthetic genes into the organism of interest...
, recombination can also refer to artificial and deliberate recombination of disparate pieces of DNA, often from different organisms, creating what is called recombinant DNA
Recombinant DNA
Recombinant DNA molecules are DNA sequences that result from the use of laboratory methods to bring together genetic material from multiple sources, creating sequences that would not otherwise be found in biological organisms...
. A prime example of such a use of genetic recombination is gene targeting
Gene targeting
Gene targeting is a genetic technique that uses homologous recombination to change an endogenous gene. The method can be used to delete a gene, remove exons, add a gene, and introduce point mutations. Gene targeting can be permanent or conditional...
, which can be used to add, delete or otherwise change an organism's genes. This technique is important to biomedical research
Biomedical research
Biomedical research , in general simply known as medical research, is the basic research, applied research, or translational research conducted to aid and support the body of knowledge in the field of medicine...
ers as it allows them to study the effects of specific genes. Techniques based on genetic recombination are also applied in protein engineering
Protein engineering
Protein engineering is the process of developing useful or valuable proteins. It is a young discipline, with much research taking place into the understanding of protein folding and recognition for protein design principles....
to develop new proteins of biological interest.

Genetic recombination is catalyzed
Catalysis
Catalysis is the change in rate of a chemical reaction due to the participation of a substance called a catalyst. Unlike other reagents that participate in the chemical reaction, a catalyst is not consumed by the reaction itself. A catalyst may participate in multiple chemical transformations....
by many different enzyme
Enzyme
Enzymes are proteins that catalyze chemical reactions. In enzymatic reactions, the molecules at the beginning of the process, called substrates, are converted into different molecules, called products. Almost all chemical reactions in a biological cell need enzymes in order to occur at rates...
s, called recombinases. RecA
RecA
RecA is a 38 kilodalton Escherichia coli protein essential for the repair and maintenance of DNA. RecA has a structural and functional homolog in every species in which it has been seriously sought and serves as an archetype for this class of homologous DNA repair proteins...
, the chief recombinase found in Escherichia coli
Escherichia coli
Escherichia coli is a Gram-negative, rod-shaped bacterium that is commonly found in the lower intestine of warm-blooded organisms . Most E. coli strains are harmless, but some serotypes can cause serious food poisoning in humans, and are occasionally responsible for product recalls...
, is responsible for the repair of DNA double strand breaks (DSBs). In yeast and other eukaryotic organisms there are two recombinases required for repairing DSBs. The RAD51
RAD51
RAD51 is a human gene. The protein encoded by this gene is a member of the RAD51 protein family which assist in repair of DNA double strand breaks. RAD51 family members are homologous to the bacterial RecA and yeast Rad51...
protein is required for mitotic
Mitosis
Mitosis is the process by which a eukaryotic cell separates the chromosomes in its cell nucleus into two identical sets, in two separate nuclei. It is generally followed immediately by cytokinesis, which divides the nuclei, cytoplasm, organelles and cell membrane into two cells containing roughly...
and meiotic
Meiosis
Meiosis is a special type of cell division necessary for sexual reproduction. The cells produced by meiosis are gametes or spores. The animals' gametes are called sperm and egg cells....
recombination, whereas the DMC1
DMC1 (gene)
Meiotic recombination protein DMC1/LIM15 homolog is a protein that in humans is encoded by the DMC1 gene.-Interactions:DMC1 has been shown to interact with RAD51.-Further reading:...
protein is specific to meiotic recombination.

Chromosomal crossover refers to recombination between the paired chromosome
Chromosome
A chromosome is an organized structure of DNA and protein found in cells. It is a single piece of coiled DNA containing many genes, regulatory elements and other nucleotide sequences. Chromosomes also contain DNA-bound proteins, which serve to package the DNA and control its functions.Chromosomes...
s inherited from each of one's parents, generally occurring during meiosis
Meiosis
Meiosis is a special type of cell division necessary for sexual reproduction. The cells produced by meiosis are gametes or spores. The animals' gametes are called sperm and egg cells....
. During prophase I the four available chromatid
Chromatid
A chromatid is one of the two identical copies of DNA making up a duplicated chromosome, which are joined at their centromeres, for the process of cell division . They are called sister chromatids so long as they are joined by the centromeres...
s are in tight formation with one another. While in this formation, homologous
Homology (biology)
Homology forms the basis of organization for comparative biology. In 1843, Richard Owen defined homology as "the same organ in different animals under every variety of form and function". Organs as different as a bat's wing, a seal's flipper, a cat's paw and a human hand have a common underlying...
sites on two chromatids can mesh with one another, and may exchange genetic information.
Because recombination can occur with small probability at any location along chromosome, the frequency of recombination between two locations depends on their distance. Therefore, for genes sufficiently distant on the same chromosome the amount of crossover is high enough to destroy the correlation between alleles.

Tracking the movement of genes during crossovers has proven quite useful to geneticists. Because two genes that are close together are less likely to become separated than genes that are farther apart, geneticists can deduce roughly how far apart two genes are on a chromosome if they know the frequency of the crossovers. Geneticists can also use this method to infer the presence of certain genes. Genes that typically stay together during recombination are said to be linked. One gene in a linked pair can sometimes be used as a marker to deduce the presence of another gene. This is typically used in order to detect the presence of a disease-causing gene. 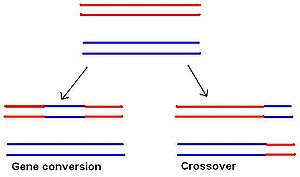 In gene conversion, a section of genetic material is copied from one chromosome to another, without the donating chromosome being changed. Gene conversion occurs at high frequency during meiotic
Meiosis
Meiosis is a special type of cell division necessary for sexual reproduction. The cells produced by meiosis are gametes or spores. The animals' gametes are called sperm and egg cells....
division and at low frequency in somatic cells. It is a process by which a DNA sequence is copied from one DNA helix (which remains unchanged) to another DNA helix, whose sequence is altered. It is one of the ways a gene may be mutated. Gene conversion may lead to non-Mendelian inheritance
Non-mendelian inheritance
Non-Mendelian inheritance is a general term that refers to any pattern of inheritance in which traits do not segregate in accordance with Mendel’s laws. These laws describe the inheritance of traits linked to single genes on chromosomes in the nucleus. In Mendelian inheritance, each parent...
and has often been recorded in fungal crosses.