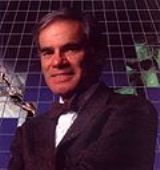 Reflecting the increasingly common analogies between computer science
Computer science
Computer science or computing science is the study of the theoretical foundations of information and computation and of practical techniques for their implementation and application in computer systems...
and biology in the 1960s, Rodbell believed that the fundamental information processing systems of both computer
Computer
A computer is a programmable machine designed to sequentially and automatically carry out a sequence of arithmetic or logical operations. The particular sequence of operations can be changed readily, allowing the computer to solve more than one kind of problem...
s and biological organism
Organism
In biology, an organism is any contiguous living system . In at least some form, all organisms are capable of response to stimuli, reproduction, growth and development, and maintenance of homoeostasis as a stable whole.An organism may either be unicellular or, as in the case of humans, comprise...
s were similar. He asserted that individual cells were analogous to cybernetic systems made up of three distinct molecular components: discriminators, transducer
Transducer
A transducer is a device that converts one type of energy to another. Energy types include electrical, mechanical, electromagnetic , chemical, acoustic or thermal energy. While the term transducer commonly implies the use of a sensor/detector, any device which converts energy can be considered a...
s, and amplifier
Amplifier
Generally, an amplifier or simply amp, is a device for increasing the power of a signal.In popular use, the term usually describes an electronic amplifier, in which the input "signal" is usually a voltage or a current. In audio applications, amplifiers drive the loudspeakers used in PA systems to...
s (otherwise known as effectors). The discriminator, or cell receptor
Receptor (biochemistry)
In biochemistry, a receptor is a molecule found on the surface of a cell, which receives specific chemical signals from neighbouring cells or the wider environment within an organism...
, receives information from outside the cell; a cell transducer
Transduction (physiology)
In physiology, transduction is the conversion of a stimulus from one form to another.Transduction in the nervous system typically refers to stimulus alerting events wherein a mechanical/physical/etc stimulus is converted into an action potential which is transmitted along axons towards the central...
processes this information across the cell membrane
Cell membrane
The cell membrane or plasma membrane is a biological membrane that separates the interior of all cells from the outside environment. The cell membrane is selectively permeable to ions and organic molecules and controls the movement of substances in and out of cells. It basically protects the cell...
; and the amplifier intensifies these signals to initiate reactions within the cell or to transmit information to other cells.

In December 1969 and early:) January 1970, Rodbell was working with a laboratory team that studied the effect of the hormone glucagon
Glucagon
Glucagon, a hormone secreted by the pancreas, raises blood glucose levels. Its effect is opposite that of insulin, which lowers blood glucose levels. The pancreas releases glucagon when blood sugar levels fall too low. Glucagon causes the liver to convert stored glycogen into glucose, which is...
on a rat liver
Liver
The liver is a vital organ present in vertebrates and some other animals. It has a wide range of functions, including detoxification, protein synthesis, and production of biochemicals necessary for digestion...
membrane receptor—the cellular discriminator that receives outside signals. Rodbell discovered that ATP (adenosine triphosphate
Adenosine triphosphate
Adenosine-5'-triphosphate is a multifunctional nucleoside triphosphate used in cells as a coenzyme. It is often called the "molecular unit of currency" of intracellular energy transfer. ATP transports chemical energy within cells for metabolism...
) could reverse the binding action of glucagon to the cell receptor and thus dissociate the glucagon from the cell altogether. He then noted that traces of GTP (guanosine triphosphate
Guanosine triphosphate
Guanosine-5'-triphosphate is a purine nucleoside triphosphate. It can act as a substrate for the synthesis of RNA during the transcription process...
) could reverse the binding process almost one thousand times faster than ATP. Rodbell deduced that GTP was probably the active biological factor in dissociating glucagon from the cell's receptor, and that GTP had been present as an impurity in his earlier experiments with ATP. This GTP, he found, stimulated the activity in the guanine nucleotide protein (later called the G-protein), which, in turn, produced profound metabolic effects in the cell. This activation of the G-protein, Rodbell postulated, was the "second messenger" process that Earl W. Sutherland had theorized. In the language of signal transduction, the G-protein, activated by GTP, was the principal component of the transducer, which was the crucial link between the discriminator and the amplifier. Later, Rodbell postulated, and then provided evidence for, additional G-proteins at the cell receptor that could inhibit and activate transduction, often at the same time. In other words, cellular receptors were sophisticated enough to have several different processes going on simultaneously.

Rodbell was born in Baltimore, Maryland. After graduating from the Baltimore City College
Baltimore City College
The Baltimore City College , also referred to as The Castle on the Hill, historically as The College, and most commonly City, is a public high school in Baltimore, Maryland, U.S.A. The City College curriculum includes the International Baccalaureate Programme and emphasizes study in the classics...
high school, he entered Johns Hopkins University
Johns Hopkins University
The Johns Hopkins University, commonly referred to as Johns Hopkins, JHU, or simply Hopkins, is a private research university based in Baltimore, Maryland, United States...
in 1943, with interests in biology
Biology
Biology is a natural science concerned with the study of life and living organisms, including their structure, function, growth, origin, evolution, distribution, and taxonomy. Biology is a vast subject containing many subdivisions, topics, and disciplines...
and French existential literature
Existentialism
Existentialism is a term applied to a school of 19th- and 20th-century philosophers who, despite profound doctrinal differences, shared the belief that philosophical thinking begins with the human subject—not merely the thinking subject, but the acting, feeling, living human individual...
. In 1944, his studies were interrupted by his military service as a U.S. Navy radio
Radio
Radio is the transmission of signals through free space by modulation of electromagnetic waves with frequencies below those of visible light. Electromagnetic radiation travels by means of oscillating electromagnetic fields that pass through the air and the vacuum of space...
operator during World War II
World War II
World War II, or the Second World War , was a global conflict lasting from 1939 to 1945, involving most of the world's nations—including all of the great powers—eventually forming two opposing military alliances: the Allies and the Axis...
. He returned to Hopkins in 1946 and received his B.S. in biology in 1949. In 1950, he married Barbara Ledermann, a former friend of the legendary diarist Anne Frank
Anne Frank
Annelies Marie "Anne" Frank is one of the most renowned and most discussed Jewish victims of the Holocaust. Acknowledged for the quality of her writing, her diary has become one of the world's most widely read books, and has been the basis for several plays and films.Born in the city of Frankfurt...
, with whom he had four children. Rodbell received his Ph.D. in biochemistry
Biochemistry
Biochemistry, sometimes called biological chemistry, is the study of chemical processes in living organisms, including, but not limited to, living matter. Biochemistry governs all living organisms and living processes...
at the University of Washington
University of Washington
University of Washington is a public research university, founded in 1861 in Seattle, Washington, United States. The UW is the largest university in the Northwest and the oldest public university on the West Coast. The university has three campuses, with its largest campus in the University...
in 1954. He did post-doctoral work at the University of Illinois at Urbana-Champaign
University of Illinois at Urbana-Champaign
The University of Illinois at Urbana–Champaign is a large public research-intensive university in the state of Illinois, United States. It is the flagship campus of the University of Illinois system...
from 1954 to 1956. In 1956, Rodbell accepted a position as a research biochemist at the National Heart Institute, part of the National Institutes of Health
National Institutes of Health
The National Institutes of Health are an agency of the United States Department of Health and Human Services and are the primary agency of the United States government responsible for biomedical and health-related research. Its science and engineering counterpart is the National Science Foundation...
, in Bethesda, Maryland
Bethesda, Maryland
Bethesda is a census designated place in southern Montgomery County, Maryland, United States, just northwest of Washington, D.C. It takes its name from a local church, the Bethesda Meeting House , which in turn took its name from Jerusalem's Pool of Bethesda...
. In 1985, Rodbell became Scientific Director of the NIH's National Institute of Environmental Health Sciences in Research Triangle Park, North Carolina where he worked until his retirement in 1994. He died in Chapel Hill of multiple organ failure after an extended illness.

This article contains text from the website of the NIH, part of the U.S. Government, and thus under public domain

Rodbell concluded his formal written Nobel Lecture with this Poem:

To my Friends:Thoughts from “On High”

Life on a roller coaster, oscillating from hither to yon,

no respite for the iconoclast, wandering from dusk to dawn.

to Andean peaks, seeking what most would proclaim insane.

Why, he ponders, are there no answers to protean questions

when others thinking cleanly and simply with Occam’s sharp razor

proclaim what seems obvious given the beam of their unerring laser.

Nature, happily unfettered with philosophy, or with cunning, or with intent

moves relentlessly onward or even backward with energy unspent

while we mortals test and probe with twinkling machines blinking precisely

at each movement, striving to unravel its irresolute randomness, its fathomless,

oblivious of its multitudinous trials & errors which we pontifically believe

must be unerring truth & resolution.

The laugh is on those who, burdened with pretensions of truth, believe they

eons of space and time in this Universe .

So, I extol the intuitions encapsulated in the folds of my mind

a proton’s discharge bring to fruition a thought, an idea borne on the feathery

appendages of teeming neurons wedded in a seamless synergy. Those

fleeting moments are cherished as are those precious impulses imparted by

the innumerable individuals who nurtured and instilled unknowingly their

encrypted thoughts in mine.

So, with these fanciful thoughts in mind I give praise to you - my friends, my

colleagues, my soul-mates, my loved ones - for letting my soul and thoughts

meander hither and yonder in this attempt at philosophy and poetry. We