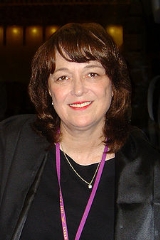 In their landmark paper published in 1991, Buck and Axel cloned
Cloning
Cloning in biology is the process of producing similar populations of genetically identical individuals that occurs in nature when organisms such as bacteria, insects or plants reproduce asexually. Cloning in biotechnology refers to processes used to create copies of DNA fragments , cells , or...
olfactory receptors, showing that they belong to the family of G protein-coupled receptor
G protein-coupled receptor
G protein-coupled receptors , also known as seven-transmembrane domain receptors, 7TM receptors, heptahelical receptors, serpentine receptor, and G protein-linked receptors , comprise a large protein family of transmembrane receptors that sense molecules outside the cell and activate inside signal...
s. By analyzing rat
Rat
Rats are various medium-sized, long-tailed rodents of the superfamily Muroidea. "True rats" are members of the genus Rattus, the most important of which to humans are the black rat, Rattus rattus, and the brown rat, Rattus norvegicus...
DNA
DNA
Deoxyribonucleic acid is a nucleic acid that contains the genetic instructions used in the development and functioning of all known living organisms . The DNA segments that carry this genetic information are called genes, but other DNA sequences have structural purposes, or are involved in...
, they estimated that there were approximately one thousand different gene
Gene
A gene is a molecular unit of heredity of a living organism. It is a name given to some stretches of DNA and RNA that code for a type of protein or for an RNA chain that has a function in the organism. Living beings depend on genes, as they specify all proteins and functional RNA chains...
s for olfactory receptors in the mammal
Mammal
Mammals are members of a class of air-breathing vertebrate animals characterised by the possession of endothermy, hair, three middle ear bones, and mammary glands functional in mothers with young...
ian genome
Genome
In modern molecular biology and genetics, the genome is the entirety of an organism's hereditary information. It is encoded either in DNA or, for many types of virus, in RNA. The genome includes both the genes and the non-coding sequences of the DNA/RNA....
. This research opened the door to the genetic
Genetics
Genetics , a discipline of biology, is the science of genes, heredity, and variation in living organisms....
and molecular
Molecular biology
Molecular biology is the branch of biology that deals with the molecular basis of biological activity. This field overlaps with other areas of biology and chemistry, particularly genetics and biochemistry...
analysis of the mechanisms of olfaction
Olfaction
Olfaction is the sense of smell. This sense is mediated by specialized sensory cells of the nasal cavity of vertebrates, and, by analogy, sensory cells of the antennae of invertebrates...
. In their later work, Buck and Axel have shown that each olfactory receptor neuron
Olfactory receptor neuron
An olfactory receptor neuron , also called an olfactory sensory neuron , is a transduction cell within the olfactory system. J. Rospars, Dendritic integration in olfactory sensory neurons: a steady-state analysis of how the neuron structure and neuron environment influence the coding of odor...
remarkably only expresses one kind of olfactory receptor protein and that the input from all neurons expressing the same receptor is collected by a single dedicated glomerulus
Glomerulus (olfaction)
The glomerulus is a spherical structure located in the olfactory bulb of the brain where synapses form between the terminals of the olfactory nerve and the dendrites of mitral, periglomerular and tufted cells...
of the olfactory bulb
Olfactory bulb
The olfactory bulb is a structure of the vertebrate forebrain involved in olfaction, the perception of odors.-Anatomy:In most vertebrates, the olfactory bulb is the most rostral part of the brain. In humans, however, the olfactory bulb is on the inferior side of the brain...
.