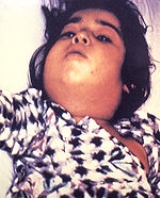 Overview
Diphtheria is an upper respiratory
Respiration (physiology)
'In physiology, respiration is defined as the transport of oxygen from the outside air to the cells within tissues, and the transport of carbon dioxide in the opposite direction...
tract illness caused by Corynebacterium diphtheriae
Corynebacterium diphtheriae
Corynebacterium diphtheriae is a pathogenic bacterium that causes diphtheria. It is also known as the Klebs-Löffler bacillus, because it was discovered in 1884 by German bacteriologists Edwin Klebs and Friedrich Löffler .-Classification:Four subspecies are recognized: C. diphtheriae mitis, C....
, a facultative anaerobic
Facultative anaerobic organism
A facultative anaerobic organism is an organism, usually a bacterium, that makes ATP by aerobic respiration if oxygen is present but is also capable of switching to fermentation...
, Gram-positive
Gram-positive
Gram-positive bacteria are those that are stained dark blue or violet by Gram staining. This is in contrast to Gram-negative bacteria, which cannot retain the crystal violet stain, instead taking up the counterstain and appearing red or pink...
bacterium. It is characterized by sore throat, low fever
Fever
Fever is a common medical sign characterized by an elevation of temperature above the normal range of due to an increase in the body temperature regulatory set-point. This increase in set-point triggers increased muscle tone and shivering.As a person's temperature increases, there is, in...
, and an adherent membrane (a pseudomembrane) on the tonsil
Tonsil
Palatine tonsils, occasionally called the faucial tonsils, are the tonsils that can be seen on the left and right sides at the back of the throat....
s, pharynx
Pharynx
The human pharynx is the part of the throat situated immediately posterior to the mouth and nasal cavity, and anterior to the esophagus and larynx. The human pharynx is conventionally divided into three sections: the nasopharynx , the oropharynx , and the laryngopharynx...
, and/or nasal cavity. A milder form of diphtheria can be restricted to the skin. Less common consequences include myocarditis
Myocarditis
Myocarditis is inflammation of heart muscle . It resembles a heart attack but coronary arteries are not blocked.Myocarditis is most often due to infection by common viruses, such as parvovirus B19, less commonly non-viral pathogens such as Borrelia burgdorferi or Trypanosoma cruzi, or as a...
(about 20% of cases) and peripheral neuropathy (about 10% of cases).

Diphtheria is a contagious disease spread by direct physical contact or breathing the aerosolized secretions of infected individuals.

How do i manage diphtheria
More
x