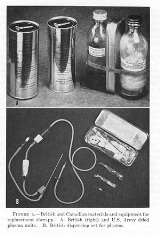 Blood plasma is prepared by spinning a tube of fresh blood
Blood fractionation
Blood fractionation is the process of fractionating whole blood, or separating it into its component parts. This is typically done by centrifuging the blood.The resulting components are:...
containing an anti-coagulant in a centrifuge
Centrifuge
A centrifuge is a piece of equipment, generally driven by an electric motor , that puts an object in rotation around a fixed axis, applying a force perpendicular to the axis...
until the blood cells fall to the bottom of the tube. The blood plasma is then poured or drawn off. Blood plasma has a density of approximately 1025 kg/m3, or 1.025 kg/l.

Blood serum
Blood serum
In blood, the serum is the component that is neither a blood cell nor a clotting factor; it is the blood plasma with the fibrinogens removed...
is blood plasma without fibrinogen
Fibrinogen
Fibrinogen is a soluble plasma glycoprotein, synthesised by the liver, that is converted by thrombin into fibrin during blood coagulation. This is achieved through processes in the coagulation cascade that activate the zymogen prothrombin to the serine protease thrombin, which is responsible for...
or the other clotting factors (i.e., whole blood minus both the cells and the clotting factors).
Plasmapheresis
Plasmapheresis
Plasmapheresis is the removal, treatment, and return of blood plasma from blood circulation. It is thus an extracorporeal therapy...
is a medical therapy that involves blood plasma extraction, treatment, and reintegration. 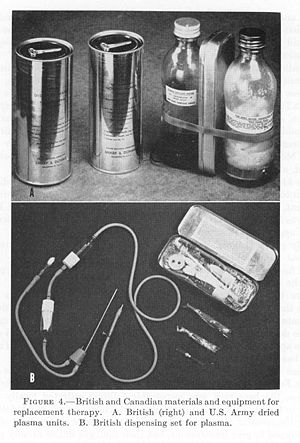 Blood plasma volume may be expanded by or drained to extravascular fluid when there are changes in Starling forces across capillary walls. For example, when blood pressure
Blood pressure
Blood pressure is the pressure exerted by circulating blood upon the walls of blood vessels, and is one of the principal vital signs. When used without further specification, "blood pressure" usually refers to the arterial pressure of the systemic circulation. During each heartbeat, BP varies...
drops in circulatory shock, Starling forces drive fluid into the interstitium, causing "third spacing."

If one stands still for a prolonged period, this causes an increase in transcapillary hydrostatic pressure. As a result, approximately 12% of blood plasma volume crosses into the extravascular compartment. This causes an increase in hematocrit
Hematocrit
The hematocrit or packed cell volume or erythrocyte volume fraction is the percentage of the concentration of red blood cells in blood. It is normally about 45% for men and 40% for women...
, serum total protein
Serum Total Protein
Serum total protein, also called plasma total protein or total protein, is a biochemical test for measuring the total amount of protein in blood plasma or serum....
, blood viscosity
Blood viscosity
Blood viscosity is a measure of the resistance of blood to flow, which is being deformed by either shear or extensional strain.Blood is a liquid that consists of plasma and particles, such as the red blood cells. The viscosity of blood thus depends on the viscosity of the plasma, in combination...
and, as a result of increased concentration of coagulation factors, it causes orthostatic hypercoagulability.

"Dried plasmas" were developed and first used in World War II
World War II
World War II, or the Second World War , was a global conflict lasting from 1939 to 1945, involving most of the world's nations—including all of the great powers—eventually forming two opposing military alliances: the Allies and the Axis...
. Prior to the United States
United States
The United States of America is a federal constitutional republic comprising fifty states and a federal district...
' involvement in the war, liquid plasma and whole blood
Whole blood
Whole blood is a term used in transfusion medicine for human blood from a standard blood donation. The blood is typically combined with an anticoagulant during the collection process, but is generally otherwise unprocessed...
were used. The "Blood for Britain" program during the early 1940s was quite successful (and popular in the United States) based on Dr. Charles Drew's contribution. A large project began in August 1940 to collect blood in New York City
New York City
New York is the most populous city in the United States and the center of the New York Metropolitan Area, one of the most populous metropolitan areas in the world. New York exerts a significant impact upon global commerce, finance, media, art, fashion, research, technology, education, and...
hospitals for the export of plasma to Britain
United Kingdom
The United Kingdom of Great Britain and Northern IrelandIn the United Kingdom and Dependencies, other languages have been officially recognised as legitimate autochthonous languages under the European Charter for Regional or Minority Languages...
. Dr. Drew was appointed medical supervisor of the "Plasma for Britain" project. His notable contribution at this time was to transform the test tube
Test tube
A test tube, also known as a culture tube or sample tube, is a common piece of laboratory glassware consisting of a finger-like length of glass or clear plastic tubing, open at the top, usually with a rounded U-shaped bottom....
methods of many blood researchers into the first successful mass production techniques.

Nonetheless, the decision was made to develop a dried plasma package for the armed forces as it would reduce breakage and make the transportation, packaging, and storage much simpler.
The resulting dried plasma package came in two tin cans containing 400 cc bottles. One bottle contained enough distilled water
Distilled water
Distilled water is water that has many of its impurities removed through distillation. Distillation involves boiling the water and then condensing the steam into a clean container.-History:...
to reconstitute the dried plasma contained within the other bottle. In about three minutes, the plasma would be ready to use and could stay fresh for around four hours.

Following the "Plasma for Britain" invention, Dr. Drew was named director of the Red Cross blood bank
Blood bank
A blood bank is a cache or bank of blood or blood components, gathered as a result of blood donation, stored and preserved for later use in blood transfusion. The term "blood bank" typically refers to a division of a hospital laboratory where the storage of blood product occurs and where proper...
and assistant director of the National Research Council
United States National Research Council
The National Research Council of the USA is the working arm of the United States National Academies, carrying out most of the studies done in their names.The National Academies include:* National Academy of Sciences...
, in charge of blood collection for the United States Army
United States Army
The United States Army is the main branch of the United States Armed Forces responsible for land-based military operations. It is the largest and oldest established branch of the U.S. military, and is one of seven U.S. uniformed services...
and Navy
United States Navy
The United States Navy is the naval warfare service branch of the United States Armed Forces and one of the seven uniformed services of the United States. The U.S. Navy is the largest in the world; its battle fleet tonnage is greater than that of the next 13 largest navies combined. The U.S...
. Dr. Drew argued against the armed forces directive that blood/plasma was to be separated by the race of the donor
Blood donation
A blood donation occurs when a person voluntarily has blood drawn and used for transfusions or made into medications by a process called fractionation....
. Dr. Drew argued that there was no racial difference in human blood and that the policy would lead to needless deaths as soldiers and sailors were required to wait for "same race" blood.

By the end of the war the American Red Cross
American Red Cross
The American Red Cross , also known as the American National Red Cross, is a volunteer-led, humanitarian organization that provides emergency assistance, disaster relief and education inside the United States. It is the designated U.S...
had provided enough blood for over six million plasma packages. Most of the surplus plasma was returned to the United States for civilian use. Serum albumin
Serum albumin
Serum albumin, often referred to simply as albumin is a protein that in humans is encoded by the ALB gene.Serum albumin is the most abundant plasma protein in mammals. Albumin is essential for maintaining the osmotic pressure needed for proper distribution of body fluids between intravascular...
replaced dried plasma for combat use during the Korean War
Korean War
The Korean War was a conventional war between South Korea, supported by the United Nations, and North Korea, supported by the People's Republic of China , with military material aid from the Soviet Union...
.

Plasma is used in blood transfusion
Blood transfusion
Blood transfusion is the process of receiving blood products into one's circulation intravenously. Transfusions are used in a variety of medical conditions to replace lost components of the blood...
s, typically as fresh frozen plasma
Fresh frozen plasma
The term fresh frozen plasma refers to the liquid portion of human blood that has been frozen and preserved after a blood donation and will be used for blood transfusion...
(FFP) or Plasma Frozen Within 24 Hours After Phlebotomy (PF24). When donating whole blood or packed red blood cell (PRBC) transfusions, ABO blood type O- is the most desirable and is considered a "universal donor," since it has neither A nor B antigens and can be safely transfused to most recipients. Type AB+ is the "universal recipient" type for whole blood or PRBC donations. However, for plasma the situation is somewhat reversed. Blood donation centers will sometimes collect only plasma from AB donors through apheresis
Apheresis
Apheresis is a medical technology in which the blood of a donor or patient is passed through an apparatus that separates out one particular constituent and returns the remainder to the circulation...
, as their plasma does not contain the antibodies that may cross react with recipient antigens. As such, AB is often considered the "universal donor" for plasma. Special programs exist just to cater to the male AB plasma donor, because of concerns about transfusion related acute lung injury
Transfusion related acute lung injury
In medicine, transfusion related acute lung injury is a serious blood transfusion complication characterized by the acute onset of non-cardiogenic pulmonary edema following transfusion of blood products....
(TRALI) and female donors who may have higher leukocyte antibodies. However, some studies do not show an increased risk of TRALI despite increased leukocyte antibodies in women who have been pregnant.