Encyclopedia
Gastritis is an inflammation of the lining of the stomach, and has many possible causes. The main acute causes are excessive alcohol
Alcoholic beverage
An alcoholic beverage is a drink containing ethanol, commonly known as alcohol. Alcoholic beverages are divided into three general classes: beers, wines, and spirits. They are legally consumed in most countries, and over 100 countries have laws regulating their production, sale, and consumption...
consumption or prolonged use of nonsteroidal anti-inflammatory drugs (also known as NSAIDs) such as aspirin
Aspirin
Aspirin , also known as acetylsalicylic acid , is a salicylate drug, often used as an analgesic to relieve minor aches and pains, as an antipyretic to reduce fever, and as an anti-inflammatory medication. It was discovered by Arthur Eichengrun, a chemist with the German company Bayer...
or ibuprofen
Ibuprofen
Ibuprofen is a nonsteroidal anti-inflammatory drug used for relief of symptoms of arthritis, fever, as an analgesic , especially where there is an inflammatory component, and dysmenorrhea....
. Sometimes gastritis develops after major surgery, traumatic injury, burns, or severe infections. Gastritis may also occur in those who have had weight loss surgery resulting in the banding
Adjustable gastric band
A laparoscopic adjustable gastric band, commonly referred to as a lap band, is an inflatable silicone device that is placed around the top portion of the stomach, via laparoscopic surgery, in order to treat obesity...
or reconstruction of the digestive tract. Chronic causes are infection with bacteria, primarily Helicobacter pylori
Helicobacter pylori
Helicobacter pylori , previously named Campylobacter pyloridis, is a Gram-negative, microaerophilic bacterium found in the stomach. It was identified in 1982 by Barry Marshall and Robin Warren, who found that it was present in patients with chronic gastritis and gastric ulcers, conditions that were...
, chronic bile reflux
Biliary reflux
Biliary reflux or duodenogastric reflux is a condition that occurs when biliary fluid flows upward from the duodenum into the stomach and esophagus....
, stress and certain autoimmune disorders can cause gastritis as well. The most common symptom is abdominal upset or pain. Other symptoms are indigestion, abdominal bloating, nausea, and vomiting and pernicious anemia
Pernicious anemia
Pernicious anemia is one of many types of the larger family of megaloblastic anemias...
. Some may have a feeling of fullness or burning in the upper abdomen. A gastroscopy, blood test, complete blood count test, or a stool test may be used to diagnose gastritis. Treatment includes taking antacids or other medicines, such as proton pump inhibitors or antibiotics, and avoiding hot or spicy foods. For those with pernicious anemia
Pernicious anemia
Pernicious anemia is one of many types of the larger family of megaloblastic anemias...
, B12 injections are given. 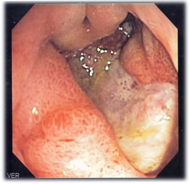 Many people with gastritis experience no symptoms at all. However, upper central abdominal pain
Abdominal pain
Abdominal pain can be one of the symptoms associated with transient disorders or serious disease. Making a definitive diagnosis of the cause of abdominal pain can be difficult, because many diseases can result in this symptom. Abdominal pain is a common problem...
is the most common symptom; the pain may be dull, vague, burning, aching, gnawing, sore, or sharp. Pain is usually located in the upper central portion of the abdomen, but it may occur anywhere from the upper left portion of the abdomen around to the back.

Other signs and symptoms may include:

Erosive gastritis is a gastric mucosal erosion caused by damage to mucosal defenses. Alcohol consumption does not cause chronic gastritis. It does, however, erode the mucosal lining of the stomach; low doses of alcohol stimulate hydrochloric acid
Hydrochloric acid
Hydrochloric acid is a solution of hydrogen chloride in water, that is a highly corrosive, strong mineral acid with many industrial uses. It is found naturally in gastric acid....
secretion. High doses of alcohol do not stimulate secretion of acid. NSAIDs inhibit cyclooxygenase-1, or COX-1, an enzyme responsible for the biosynthesis of eicosanoids in the stomach, which increases the possibility of peptic ulcers forming. Also, NSAIDs, such as aspirin, reduce a substance that protects the stomach called prostaglandin
Prostaglandin
A prostaglandin is any member of a group of lipid compounds that are derived enzymatically from fatty acids and have important functions in the animal body. Every prostaglandin contains 20 carbon atoms, including a 5-carbon ring....
. These drugs used in a short period are not typically dangerous. However, regular use can lead to gastritis.

Chronic gastritis refers to a wide range of problems of the gastric tissues that are the result of H. pylori infection. The immune system makes proteins and antibodies that fight infections in the body to maintain a homeostatic condition. In some disorders the body targets the stomach as if it were a foreign protein or pathogen; it makes antibodies against, severely damages, and may even destroy the stomach or its lining. In some cases bile, normally used to aid digestion in the small intestine, will enter through the pyloric valve of the stomach if it has been removed during surgery or does not work properly, also leading to gastritis. Gastritis may also be caused by other medical conditions, including HIV/AIDS, Crohn's disease
Crohn's disease
Crohn's disease, also known as regional enteritis, is a type of inflammatory bowel disease that may affect any part of the gastrointestinal tract from mouth to anus, causing a wide variety of symptoms...
, certain connective tissue disorders, and liver or kidney failure.

Mucous gland metaplasia
Metaplasia
Metaplasia is the reversible replacement of one differentiated cell type with another mature differentiated cell type. The change from one type of cell to another may generally be a part of normal maturation process or caused by some sort of abnormal stimulus...
, the reversible replacement of differentiated cells, occurs in the setting of severe damage of the gastric glands, which then waste away (atrophic gastritis
Atrophic gastritis
Atrophic gastritis is a process of chronic inflammation of the stomach mucosa, leading to loss of gastric glandular cells and their eventual replacement by intestinal and fibrous tissues...
), which are progressively replaced by mucous glands. Gastric ulcers may develop; it is unclear if they are the causes or the consequences. Intestinal metaplasia typically begins in response to chronic mucosal injury in the antrum
Antrum
In biology, antrum is a general term for a cavity or chamber which may have specific meaning in reference to certain organs or sites in the body.In vertebrates, it may mean for example:...
, and may extend to the body. Gastric mucosa cells change to resemble intestinal mucosa and may even assume absorptive characteristics. Intestinal metaplasia
Intestinal metaplasia
Intestinal metaplasia is the transformation of epithelium, usually of the stomach, to a type that bears some resemblance to the intestine. Initially, the transformed eptithelium bears resemblance to the small intestine; in the later stages, the epithelium resembles the colon...
is classified histologically as complete or incomplete. With complete metaplasia, gastric mucosa is completely transformed into small-bowel mucosa, both histologically and functionally, with the ability to absorb nutrients and secrete peptides. In incomplete metaplasia, the epithelium assumes a histologic appearance closer to that of the large intestine and frequently exhibits dysplasia.

Often, a diagnosis can be made based on the patient's description of his or her symptoms, but other methods which may be used to verify gastritis include: