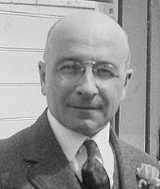 Overview
Alexis Carrel was a French
French people
The French are a nation that share a common French culture and speak the French language as a mother tongue. Historically, the French population are descended from peoples of Celtic, Latin and Germanic origin, and are today a mixture of several ethnic groups...
surgeon and biologist who was awarded the Nobel Prize in Physiology or Medicine
Nobel Prize in Physiology or Medicine
The Nobel Prize in Physiology or Medicine administered by the Nobel Foundation, is awarded once a year for outstanding discoveries in the field of life science and medicine. It is one of five Nobel Prizes established in 1895 by Swedish chemist Alfred Nobel, the inventor of dynamite, in his will...
in 1912 for pioneering vascular suturing techniques. He invented the first perfusion pump with Charles A. Lindbergh opening the way to organ transplantation. He is also known for making famous a miraculous healing at Lourdes
Lourdes
Lourdes is a commune in the Hautes-Pyrénées department in the Midi-Pyrénées region in south-western France.Lourdes is a small market town lying in the foothills of the Pyrenees, famous for the Marian apparitions of Our Lady of Lourdes occurred in 1858 to Bernadette Soubirous...
by witnessing the event. Like many intellectuals before World War II
World War II
World War II, or the Second World War , was a global conflict lasting from 1939 to 1945, involving most of the world's nations—including all of the great powers—eventually forming two opposing military alliances: the Allies and the Axis...
he promoted eugenics
Eugenics
Eugenics is the "applied science or the bio-social movement which advocates the use of practices aimed at improving the genetic composition of a population", usually referring to human populations. The origins of the concept of eugenics began with certain interpretations of Mendelian inheritance,...
. He was a regent for the French Foundation for the Study of Human Problems during the Nazi occupation of Vichy France
Vichy France
Vichy France, Vichy Regime, or Vichy Government, are common terms used to describe the government of France that collaborated with the Axis powers from July 1940 to August 1944. This government succeeded the Third Republic and preceded the Provisional Government of the French Republic...
which implemented the eugenics policies there; his association with the Foundation led to allegations of collaborating with the Nazis.
Born in Sainte-Foy-lès-Lyon
Sainte-Foy-lès-Lyon
Sainte-Foy-lès-Lyon is a commune in the Rhône department in eastern France.It is a suburb of the city of Lyon, being located to the west of the city. It is thus a component of the metropolitan Urban Community of Lyon....
, Rhône, Carrel was raised in a devout Catholic family and was educated by Jesuits, though he no longer practiced his religion when he entered the university.

All great men are gifted with intuition. They know without reasoning or analysis, what they need to know.