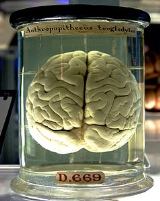 Overview
The brain is the center of the nervous system
Nervous system
The nervous system is an organ system containing a network of specialized cells called neurons that coordinate the actions of an animal and transmit signals between different parts of its body. In most animals the nervous system consists of two parts, central and peripheral. The central nervous...
in all vertebrate
Vertebrate
Vertebrates are animals that are members of the subphylum Vertebrata . Vertebrates are the largest group of chordates, with currently about 58,000 species described. Vertebrates include the jawless fishes, bony fishes, sharks and rays, amphibians, reptiles, mammals, and birds...
and most invertebrate
Invertebrate
An invertebrate is an animal without a backbone. The group includes 97% of all animal species – all animals except those in the chordate subphylum Vertebrata .Invertebrates form a paraphyletic group...
animals—only a few primitive invertebrates such as sponges, jellyfish
Cnidaria
Cnidaria is a phylum containing over 9,000 species of animals found exclusively in aquatic and mostly marine environments. Their distinguishing feature is cnidocytes, specialized cells that they use mainly for capturing prey. Their bodies consist of mesoglea, a non-living jelly-like substance,...
, sea squirts and starfish
Echinoderm
Echinoderms are a phylum of marine animals. Echinoderms are found at every ocean depth, from the intertidal zone to the abyssal zone....
es do not have one. It is located in the head, usually close to primary sensory apparatus such as vision, hearing, balance, taste and smell. The brain of a vertebrate is the most complex organ in its body. In a typical human the cerebral cortex
Cerebral cortex
The cerebral cortex is a sheet of neural tissue that is outermost to the cerebrum of the mammalian brain. It plays a key role in memory, attention, perceptual awareness, thought, language, and consciousness. It is constituted of up to six horizontal layers, each of which has a different...
(the largest part) is estimated to contain 15–33 billion neuron
Neuron
A neuron is an electrically excitable cell that processes and transmits information by electrical and chemical signaling. Chemical signaling occurs via synapses, specialized connections with other cells. Neurons connect to each other to form networks. Neurons are the core components of the nervous...
s, each connected by synapse
Synapse
In the nervous system, a synapse is a structure that permits a neuron to pass an electrical or chemical signal to another cell...
s to several thousand other neurons.

Brain, n. An apparatus with which we think we think.

Do we trivialize a sublime feeling if we appreciate its dependence on the brain? Not in the least. Its significance does not depend on its being a soul state or a brain state...Humility bids us to take ourselves as we are; we do not have to be cosmically significant to be genuinely significant.

"We do have an organ for understanding and recognizing moral facts. It is called the brain.