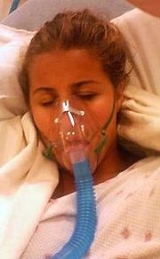 Overview
Anaphylaxis is defined as "a serious allergic reaction that is rapid in onset and may cause death". It typically results in a number of symptoms including throat swelling, an itchy rash, and low blood pressure
Blood pressure
Blood pressure is the pressure exerted by circulating blood upon the walls of blood vessels, and is one of the principal vital signs. When used without further specification, "blood pressure" usually refers to the arterial pressure of the systemic circulation. During each heartbeat, BP varies...
. Common causes include insect bites, foods, and medications.
On a pathophysiologic
Pathophysiology
Pathophysiology is the study of the changes of normal mechanical, physical, and biochemical functions, either caused by a disease, or resulting from an abnormal syndrome...
level, anaphylaxis is due to the release of mediators from certain types of white blood cells triggered either by immunologic
Immune system
An immune system is a system of biological structures and processes within an organism that protects against disease by identifying and killing pathogens and tumor cells. It detects a wide variety of agents, from viruses to parasitic worms, and needs to distinguish them from the organism's own...
or non-immunologic mechanisms. It is diagnosed based on the presenting symptoms and signs.