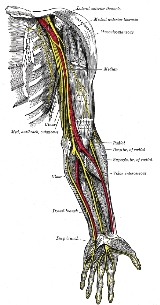 Each nerve is a cordlike structure that contains many axons.

How does the action potential tie into nerve conduction
More

Nerves are categorized into three groups based on the direction that signals are conducted:
Nerves can be categorized into two groups based on where they connect to the central nervous system:
Each nerve is covered externally by a dense sheath of connective tissue
Connective tissue
"Connective tissue" is a fibrous tissue. It is one of the four traditional classes of tissues . Connective Tissue is found throughout the body.In fact the whole framework of the skeleton and the different specialized connective tissues from the crown of the head to the toes determine the form of...
, the epineurium
Epineurium
The epineurium is the outermost layer of connective tissue surrounding a peripheral nerve. It is made of dense irregular connective tissue and usually contains multiple nerve fascicles as well as blood vessels which supply the nerve...
. Underlying this is a layer of flat cells, the perineurium
Perineurium
In the peripheral nervous system, nerve fibers are each wrapped in a protective sheath known as the endoneurium. These are bundled together into groups known as fascicles, each surrounded by a protective sheath known as the perineurium. Several fascicles may be in turn bundled together with a blood...
, which forms a complete sleeve around a bundle of axons. Perineurial septae extend into the nerve and subdivide it into several bundles of fibres. Surrounding each such fibre is the endoneurium
Endoneurium
The endoneurium, also referred to as an endoneurial channel, sheath or tube, is a layer of delicate connective tissue made up of endoneurial cells that encloses the myelin sheath of a spinal cord nerve fiber. These are bundled up into groups called nerve fascicles, which have a protective sheath...
. This forms an unbroken tube which extends from the surface of the spinal cord to the level at which the axon synapses with its muscle fibers, or ends in sensory receptor
Sensory receptor
In a sensory system, a sensory receptor is a sensory nerve ending that responds to a stimulus in the internal or external environment of an organism...
s. The endoneurium consists of an inner sleeve of material called the glycocalyx
Glycocalyx
Glycocalyx is a general term referring to extracellular polymeric material produced by some bacteria, epithelia and other cells. The slime on the outside of a fish is considered a glycocalyx. The term was initially applied to the polysaccharide matrix excreted by epithelial cells forming a...
and an outer, delicate, meshwork of collagen
Collagen
Collagen is a group of naturally occurring proteins found in animals, especially in the flesh and connective tissues of mammals. It is the main component of connective tissue, and is the most abundant protein in mammals, making up about 25% to 35% of the whole-body protein content...
fibres. Nerves are bundled along with blood vessels, since the neurons of a nerve have fairly high energy requirements.
Within the endoneurium, the individual nerve fibres are surrounded by a low protein liquid called endoneurial fluid. The endoneurium has properties analogous to the blood-brain barrier
Blood-brain barrier
The blood–brain barrier is a separation of circulating blood and the brain extracellular fluid in the central nervous system . It occurs along all capillaries and consists of tight junctions around the capillaries that do not exist in normal circulation. Endothelial cells restrict the diffusion...
, in that it prevents certain molecules from crossing from the blood into the endoneurial fluid. In this respect, endoneurial fluid is similar to cerebro-spinal fluid in the central nervous system
Central nervous system
The central nervous system is the part of the nervous system that integrates the information that it receives from, and coordinates the activity of, all parts of the bodies of bilaterian animals—that is, all multicellular animals except sponges and radially symmetric animals such as jellyfish...
. During the development of nerve edema
Edema
Edema or oedema ; both words from the Greek , oídēma "swelling"), formerly known as dropsy or hydropsy, is an abnormal accumulation of fluid beneath the skin or in one or more cavities of the body that produces swelling...
from nerve irritation or (injury), the amount of endoneurial fluid may increase at the site of irritation. This increase in fluid can be visualized using magnetic resonance neurography
Magnetic resonance neurography
Magnetic resonance neurography is the direct imaging of nerves in the body by optimizing selectivity for unique MRI water properties of nerves. It is a modification of magnetic resonance imaging. This technique yields a detailed image of a nerve from the resonance signal that arises from in the...
, and thus MR neurography can identify nerve irritation and/or injury.

A nerve conveys information in the form of electrochemical impulses (known as nerve impulses or action potential
Action potential
In physiology, an action potential is a short-lasting event in which the electrical membrane potential of a cell rapidly rises and falls, following a consistent trajectory. Action potentials occur in several types of animal cells, called excitable cells, which include neurons, muscle cells, and...
s) carried by the individual neurons that make up the nerve. These impulses are extremely fast, with some myelinated neurons conducting at speeds up to 120 m/s. The impulses travel from one neuron to another by crossing a synapse
Synapse
In the nervous system, a synapse is a structure that permits a neuron to pass an electrical or chemical signal to another cell...
, the message is converted from electrical
Electrical synapse
An electrical synapse is a mechanical and electrically conductive link between two abutting neurons that is formed at a narrow gap between the pre- and postsynaptic neurons known as a gap junction. At gap junctions, such cells approach within about 3.5 nm of each other, a much shorter...
to chemical
Chemical synapse
Chemical synapses are specialized junctions through which neurons signal to each other and to non-neuronal cells such as those in muscles or glands. Chemical synapses allow neurons to form circuits within the central nervous system. They are crucial to the biological computations that underlie...
and then back to electrical.

Nerves can be categorized into two groups based on function:

Damage to nerves can be caused by physical injury or swelling (e.g. carpal tunnel syndrome
Carpal tunnel syndrome
Carpal Tunnel Syndrome is an entrapment idiopathic median neuropathy, causing paresthesia, pain, and other symptoms in the distribution of the median nerve due to its compression at the wrist in the carpal tunnel. The pathophysiology is not completely understood but can be considered compression...
), autoimmune diseases (e.g. Guillain-Barré syndrome
Guillain-Barré syndrome
Guillain–Barré syndrome , sometimes called Landry's paralysis, is an acute inflammatory demyelinating polyneuropathy , a disorder affecting the peripheral nervous system. Ascending paralysis, weakness beginning in the feet and hands and migrating towards the trunk, is the most typical symptom...
), infection (neuritis), diabetes or failure of the blood vessels surrounding the nerve. A pinched nerve occurs when pressure is placed on a nerve, usually from swelling due to an injury or pregnancy. Nerve damage or pinched nerves are usually accompanied by pain
Pain
Pain is an unpleasant sensation often caused by intense or damaging stimuli such as stubbing a toe, burning a finger, putting iodine on a cut, and bumping the "funny bone."...
, numbness, weakness, or paralysis
Paralysis
Paralysis is loss of muscle function for one or more muscles. Paralysis can be accompanied by a loss of feeling in the affected area if there is sensory damage as well as motor. A study conducted by the Christopher & Dana Reeve Foundation, suggests that about 1 in 50 people have been diagnosed...
. Patients may feel these symptoms in areas far from the actual site of damage, a phenomenon called referred pain
Referred pain
Referred pain is pain perceived at a location other than the site of the painful stimulus. An example is the case of ischemia brought on by a myocardial infarction , where pain is often felt in the neck, shoulders, and back rather than in the chest, the site of the injury...
. Referred pain occurs because when a nerve is damaged, signalling is defective from all parts of the area from which the nerve receives input, not just the site of the damage.
Neurologists
Neurology
Neurology is a medical specialty dealing with disorders of the nervous system. Specifically, it deals with the diagnosis and treatment of all categories of disease involving the central, peripheral, and autonomic nervous systems, including their coverings, blood vessels, and all effector tissue,...
usually diagnose disorders of the nerves by a physical examination
Physical examination
Physical examination or clinical examination is the process by which a doctor investigates the body of a patient for signs of disease. It generally follows the taking of the medical history — an account of the symptoms as experienced by the patient...
, including the testing of reflex
Reflex
A reflex action, also known as a reflex, is an involuntary and nearly instantaneous movement in response to a stimulus. A true reflex is a behavior which is mediated via the reflex arc; this does not apply to casual uses of the term 'reflex'.-See also:...
es, walking
Walking
Walking is one of the main gaits of locomotion among legged animals, and is typically slower than running and other gaits. Walking is defined by an 'inverted pendulum' gait in which the body vaults over the stiff limb or limbs with each step...
and other directed movements, muscle
Muscle
Muscle is a contractile tissue of animals and is derived from the mesodermal layer of embryonic germ cells. Muscle cells contain contractile filaments that move past each other and change the size of the cell. They are classified as skeletal, cardiac, or smooth muscles. Their function is to...
weakness, proprioception
Proprioception
Proprioception , from Latin proprius, meaning "one's own" and perception, is the sense of the relative position of neighbouring parts of the body and strength of effort being employed in movement...
, and the sense of touch
Somatosensory system
The somatosensory system is a diverse sensory system composed of the receptors and processing centres to produce the sensory modalities such as touch, temperature, proprioception , and nociception . The sensory receptors cover the skin and epithelia, skeletal muscles, bones and joints, internal...
. This initial exam can be followed with tests such as nerve conduction study
Nerve conduction study
A nerve conduction study is a test commonly used to evaluate the function, especially the ability of electrical conduction, of the motor and sensory nerves of the human body.Nerve conduction velocity is a common measurement made during this test...
and electromyography
Electromyography
Electromyography is a technique for evaluating and recording the electrical activity produced by skeletal muscles. EMG is performed using an instrument called an electromyograph, to produce a record called an electromyogram. An electromyograph detects the electrical potential generated by muscle...
(EMG).

Cancer can spread along nerves; this is known as perineural spread and often is associated with a worse prognosis.