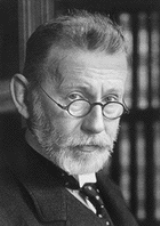 Paul Ehrlich was born into a Jewish family in Strehlen
Strzelin
Strzelin is a town in Lower Silesian Voivodeship in south-western Poland. It is located on the Oława river, a tributary of the Oder, about south of the region's capital Wrocław. The town is the seat of Strzelin County and also of the smaller municipality of Strzelin...
, in the German Kingdom of Prussia
Kingdom of Prussia
The Kingdom of Prussia was a German kingdom from 1701 to 1918. Until the defeat of Germany in World War I, it comprised almost two-thirds of the area of the German Empire...
, Province of Silesia
Province of Silesia
The Province of Silesia was a province of the Kingdom of Prussia from 1815 to 1919.-Geography:The territory comprised the bulk of the former Bohemian crown land of Silesia and the County of Kladsko, which King Frederick the Great had conquered from the Austrian Habsburg Monarchy in the 18th...
(now in Poland). As a schoolboy (inspired by his cousin Karl eigert who owned one of the first microtomes
Microtome
A microtome is a sectioning instrument that allows for the cutting of extremely thin slices of material, known as sections. Microtomes are an important device in microscopy preparation, allowing for the preparation of samples for observation under transmitted light or electron radiation...
) he became fascinated by the process of staining microscopic tissue substances. He kept that interest during his studies at the universities of Wroclaw (Breslau), Strasbourg, Freiburg im Breisgau and Leipzig.

In his dissertation at the University of Leipzig
University of Leipzig
The University of Leipzig , located in Leipzig in the Free State of Saxony, Germany, is one of the oldest universities in the world and the second-oldest university in Germany...
, he picked up the topic again ("Contributions to the Theory and Practice of Histological Staining", Beiträge zur Theorie und Praxis der histologischen Färbung). He married Hedwig Pinkus (then aged 19) in 1883. The couple had two daughters, named Stephanie and Marianne. After his clinical education and habilitation ("The Need of the Organism for Oxygen ", Das Sauerstoffbedürfnis des Organismus) at the Charité
Charité
The Charité - Universitätsmedizin Berlin is the medical school for both the Humboldt University and the Free University of Berlin. After the merger with their fourth campus in 2003, the Charité is one of the largest university hospitals in Europe....
in Berlin in 1886 he received a call from Robert Koch
Robert Koch
Heinrich Hermann Robert Koch was a German physician. He became famous for isolating Bacillus anthracis , the Tuberculosis bacillus and the Vibrio cholerae and for his development of Koch's postulates....
to join the Institute of Infectious Diseases in Berlin (1891).

Ehrlich spent two years in Egypt
Egypt
Egypt , officially the Arab Republic of Egypt, Arabic: , is a country mainly in North Africa, with the Sinai Peninsula forming a land bridge in Southwest Asia. Egypt is thus a transcontinental country, and a major power in Africa, the Mediterranean Basin, the Middle East and the Muslim world...
, recovering from tuberculosis
Tuberculosis
Tuberculosis, MTB, or TB is a common, and in many cases lethal, infectious disease caused by various strains of mycobacteria, usually Mycobacterium tuberculosis. Tuberculosis usually attacks the lungs but can also affect other parts of the body...
. Thereafter he worked with his friend Emil Adolf von Behring
Emil Adolf von Behring
Emil Adolf von Behring was a German physiologist who received the 1901 Nobel Prize in Physiology or Medicine, the first one so awarded.-Biography:...
on the development of a diphtheria
Diphtheria
Diphtheria is an upper respiratory tract illness caused by Corynebacterium diphtheriae, a facultative anaerobic, Gram-positive bacterium. It is characterized by sore throat, low fever, and an adherent membrane on the tonsils, pharynx, and/or nasal cavity...
serum. The serum was successfully used during an epidemic in Germany. Ehrlich skillfully transformed diphtheria antitoxin into an effective preparation, his first world renown achievement. However, von Behring cheated Ehrlich out of both recognition and financial reward. Only von Behring received the first Nobel Prize in Medicine, in 1901, for contributions in research of diphtheria.
These works inspired Ehrlich's famous side-chain theory
Side-chain theory
Side-chain theory is a theory proposed by Paul Ehrlich to explain the immune response in living cells. Ehrlich theorized from very early in his career that chemical structure could be used to explain why the immune response occurred in reaction to infection...
(Seitenkettentheorie) from 1897. This theory explained the effects of serum
Blood plasma
Blood plasma is the straw-colored liquid component of blood in which the blood cells in whole blood are normally suspended. It makes up about 55% of the total blood volume. It is the intravascular fluid part of extracellular fluid...
and enabled measurement of the amount of antigen
Antigen
An antigen is a foreign molecule that, when introduced into the body, triggers the production of an antibody by the immune system. The immune system will then kill or neutralize the antigen that is recognized as a foreign and potentially harmful invader. These invaders can be molecules such as...
. In 1896 Ehrlich became the director of the newly founded Institute of Serum Research and Examination (Institut für Serumforschung und Serumprüfung) in Steglitz (Berlin). In 1899 the institute was moved to Frankfurt
Frankfurt
Frankfurt am Main , commonly known simply as Frankfurt, is the largest city in the German state of Hesse and the fifth-largest city in Germany, with a 2010 population of 688,249. The urban area had an estimated population of 2,300,000 in 2010...
(Main) and extended into the Royal Institute of Experimental Therapy (Institut für experimentelle Therapie). Here Ehrlich researched chemotherapy and infectious diseases. In 1904 Ehrlich became honorary professor of the University of Göttingen.

Erlich's daughter Marianne was married to the great German-Jewish mathematician
Mathematician
A mathematician is a person whose primary area of study is the field of mathematics. Mathematicians are concerned with quantity, structure, space, and change....
Edmund Landau
Edmund Landau
Edmund Georg Hermann Landau was a German Jewish mathematician who worked in the fields of number theory and complex analysis.-Biography:...
.
Ehrlich died of a stroke
Stroke
A stroke, previously known medically as a cerebrovascular accident , is the rapidly developing loss of brain function due to disturbance in the blood supply to the brain. This can be due to ischemia caused by blockage , or a hemorrhage...
in Bad Homburg
Bad Homburg
Bad Homburg vor der Höhe is the district town of the Hochtaunuskreis, Hesse, Germany, on the southern slope of the Taunus, bordering among others Frankfurt am Main and Oberursel...
in 1915, age 61. He is buried in the Juedischer Friedhof on Rat Beil Straße in Frankfurt am Main, Germany.

The concept of a "magic bullet
Magic bullet
Magic bullet may refer to:* In the German folk legend Freischütz, an enchanted bullet obtained by a marksman through a contract with the devil....
" drug comes from the experience of 19th century German chemists with selectively staining tissues for histological
Histology
Histology is the study of the microscopic anatomy of cells and tissues of plants and animals. It is performed by examining cells and tissues commonly by sectioning and staining; followed by examination under a light microscope or electron microscope...
examination, and in particular, selectively staining bacteria (Ehrlich was an exceptionally gifted histological chemist
Chemist
A chemist is a scientist trained in the study of chemistry. Chemists study the composition of matter and its properties such as density and acidity. Chemists carefully describe the properties they study in terms of quantities, with detail on the level of molecules and their component atoms...
, and invented the precursor technique to Gram staining bacteria). Ehrlich reasoned that if a compound could be made that selectively targeted a disease
Disease
A disease is an abnormal condition affecting the body of an organism. It is often construed to be a medical condition associated with specific symptoms and signs. It may be caused by external factors, such as infectious disease, or it may be caused by internal dysfunctions, such as autoimmune...
-causing organism
Organism
In biology, an organism is any contiguous living system . In at least some form, all organisms are capable of response to stimuli, reproduction, growth and development, and maintenance of homoeostasis as a stable whole.An organism may either be unicellular or, as in the case of humans, comprise...
, then a toxin
Toxin
A toxin is a poisonous substance produced within living cells or organisms; man-made substances created by artificial processes are thus excluded...
for that organism could be delivered along with the agent of selectivity. Hence, a "magic bullet" would be created that killed only the organism targeted.

A problem with the use of the magic bullet concept as it emerged from its histological roots is that people confused the dye
Dye
A dye is a colored substance that has an affinity to the substrate to which it is being applied. The dye is generally applied in an aqueous solution, and requires a mordant to improve the fastness of the dye on the fiber....
with the agent of tissue
Biological tissue
Tissue is a cellular organizational level intermediate between cells and a complete organism. A tissue is an ensemble of cells, not necessarily identical, but from the same origin, that together carry out a specific function. These are called tissues because of their identical functioning...
selectivity and antibiotic
Antibiotic
An antibacterial is a compound or substance that kills or slows down the growth of bacteria.The term is often used synonymously with the term antibiotic; today, however, with increased knowledge of the causative agents of various infectious diseases, antibiotic has come to denote a broader range of...
activity. Prontosil
Prontosil
Prontosil, the first commercially available antibacterial antibiotic , was developed by a research team at the Bayer Laboratories of the IG Farben conglomerate in Germany...
, a sulfa drug whose active component is sulfanilamide, is a classic example of the fact that color
Color
Color or colour is the visual perceptual property corresponding in humans to the categories called red, green, blue and others. Color derives from the spectrum of light interacting in the eye with the spectral sensitivities of the light receptors...
is not essential to antibacterial activity.

The concept of a "magic bullet" was fully realized with the invention of monoclonal antibodies.

Paul Ehrlich's life and achievements were filmed 1940 in Hollywood by William Dieterle
William Dieterle
William Dieterle was a German actor and film director, who worked in Hollywood for much of his career. His best known films include The Devil and Daniel Webster, The Story of Louis Pasteur and The Hunchback of Notre Dame...
in Dr. Ehrlich’s Magic Bullet
The Magic Bullet
Dr. Ehrlich's Magic Bullet is a 1940 biographical film directed by William Dieterle and starring Edward G. Robinson, based on the true story of the German doctor and scientist Dr. Paul Ehrlich. The film was released by Warner Bros., with some controversy considering the subject of syphilis in a...
with Edward G. Robinson
Edward G. Robinson
Edward G. Robinson was a Romanian-born American actor. A popular star during Hollywood's Golden Age, he is best remembered for his roles as gangsters, such as Rico in his star-making film Little Caesar and as Rocco in Key Largo...
in the title role.