A museum ship, or sometimes memorial ship, is a ship
Ship
Since the end of the age of sail a ship has been any large buoyant marine vessel. Ships are generally distinguished from boats based on size and cargo or passenger capacity. Ships are used on lakes, seas, and rivers for a variety of activities, such as the transport of people or goods, fishing,...
that has been preserved and converted into a museum
Museum
A museum is an institution that cares for a collection of artifacts and other objects of scientific, artistic, cultural, or historical importance and makes them available for public viewing through exhibits that may be permanent or temporary. Most large museums are located in major cities...
open to the public, for educational or memorial
Memorial
A memorial is an object which serves as a focus for memory of something, usually a person or an event. Popular forms of memorials include landmark objects or art objects such as sculptures, statues or fountains, and even entire parks....
purposes. Some are also used for training and recruitment purposes, a use found mostly with the small number of museum ships that are still operational, i.e., capable of regular movement.

There are several hundred museum ships around the world, with around 175 of them organised in the Historic Naval Ships Association though there are also many non-naval museum ships as well, from general merchant ships to tug
Tugboat
A tugboat is a boat that maneuvers vessels by pushing or towing them. Tugs move vessels that either should not move themselves, such as ships in a crowded harbor or a narrow canal,or those that cannot move by themselves, such as barges, disabled ships, or oil platforms. Tugboats are powerful for...
s and lightships
Lightvessel
A lightvessel, or lightship, is a ship which acts as a lighthouse. They are used in waters that are too deep or otherwise unsuitable for lighthouse construction...
. Many, if not most, museum ships are also associated with a maritime museum
Maritime museum
A maritime museum is a museum specializing in the display of objects relating to ships and travel on large bodies of water...
.

Despite the long history of sea travel, the ravages of the elements and the expense of maintenance has resulted in the destruction of nearly all the ships that were ever built, often by sinking, usually by being broken up and sold for scrap. Only a few have survived, sometimes because of historical significance, but more often simply due to luck and circumstance.

Since an old ship tied up at dockside, without attention, will still decay and eventually sink, the practice of recent years has been to form some sort of preservation society, solicit donations from governments or private individuals, organize volunteer labor from the enthusiasts, and open the restored ship to visitors, usually for a fee.

The restoration and maintenance
Maintenance, Repair and Operations
Maintenance, repair, and operations or maintenance, repair, and overhaul involves fixing any sort of mechanical or electrical device should it become out of order or broken...
of museum ships presents problems for historians who are asked for advice, and the results periodically generate some controversy. For instance, the rigging of sailing ships has almost never survived, and so the rigging plan must be reconstructed from various sources. Studying the ships also allows historians to analyse how life on and operation of the ships took place. Numerous scientific papers have been written on ship restoration and maintenance, and international conferences are held discussing the latest developments. Some years ago, the Barcelona Charter
Barcelona Charter
The Barcelona Charter, in full the European Charter for the Conservation and Restoration of Traditional Ships in Operation is an informal but widely accepted standard for maintenance and restoration projects on historic watercraft that are still in operation as active sailing vessels.- Background...
was signed by a variety of international owner organizations of traditional vessels, and provides certain accepted minimum criteria for the restoration and operation of traditional watercraft still in operation.

Another consideration is the distinction between a 'real' museum ship, and a ship replica
Ship replica
A ship replica is a reconstruction of a no longer existing ship. Replicas can range from authentically reconstructed, fully seaworthy ships, to ships of modern construction that give an impression of an historic vessel...
. As repairs accumulate over time, less and less of the ship is of the original materials, and the lack of old parts (or even 'appropriate' work tools) may lead to the use of modern 'short-cuts' (such as welding
Welding
Welding is a fabrication or sculptural process that joins materials, usually metals or thermoplastics, by causing coalescence. This is often done by melting the workpieces and adding a filler material to form a pool of molten material that cools to become a strong joint, with pressure sometimes...
a metal plate instead of rivet
Rivet
A rivet is a permanent mechanical fastener. Before being installed a rivet consists of a smooth cylindrical shaft with a head on one end. The end opposite the head is called the buck-tail. On installation the rivet is placed in a punched or pre-drilled hole, and the tail is upset, or bucked A rivet...
ing it, as would be the case during the ships historical period). Visitors without historical background are also often unable to distinguish between a historical museum ship and a (more-or-less historically relevant) ship replica, which may serve solely as a tourist attraction. 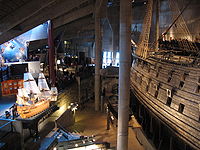 Typically the visitor enters via gangplank, wanders around on the deck, then goes below, usually using the original stairways, giving a sense of how the crew got around. The interior features restored but inactivated equipment, enhanced with mementos including old photographs, explanatory displays, pages from the ship's logs, menus, and the like. Some will add recorded sound effects, audio tours or video displays to add to the experience.

In some cases ships the radio room has been brought back into use, with volunteers operating amateur radio
Amateur radio
Amateur radio is the use of designated radio frequency spectrum for purposes of private recreation, non-commercial exchange of messages, wireless experimentation, self-training, and emergency communication...
equipment. Often the callsign assigned is a variation on the original identification of the ship. For example, the submarine
Submarine
A submarine is a watercraft capable of independent operation below the surface of the water. It differs from a submersible, which has more limited underwater capability...
USS Cobia, which had the call NBQV, is now on the air as NB9QV. In other cases, such as the , a distinctive call (in this case KH6BB) is used. This radio work not only helps restore part of the vessel, but provides worldwide publicity for the museum ship.

The tourism
Tourism
Tourism is travel for recreational, leisure or business purposes. The World Tourism Organization defines tourists as people "traveling to and staying in places outside their usual environment for not more than one consecutive year for leisure, business and other purposes".Tourism has become a...
appeal of a city waterfront graced by an interesting old vessel is considered by many to be sufficient enough that any port city should showcase one or more museum ships, which are often great favourites of locals and visitors. This may even include building a replica ship
Ship replica
A ship replica is a reconstruction of a no longer existing ship. Replicas can range from authentically reconstructed, fully seaworthy ships, to ships of modern construction that give an impression of an historic vessel...
at great expense.