The Pacific Theater of Operations (PTO) was the World War II
World War II
World War II, or the Second World War , was a global conflict lasting from 1939 to 1945, involving most of the world's nations—including all of the great powers—eventually forming two opposing military alliances: the Allies and the Axis...
area of military activity in the Pacific Ocean
Pacific Ocean
The Pacific Ocean is the largest of the Earth's oceanic divisions. It extends from the Arctic in the north to the Southern Ocean in the south, bounded by Asia and Australia in the west, and the Americas in the east.At 165.2 million square kilometres in area, this largest division of the World...
and the countries bordering it, a geographic scope that reflected the operational and administrative command structures of the American forces during that period. (The other areas of the Pacific War
Pacific War
The Pacific War, also sometimes called the Asia-Pacific War refers broadly to the parts of World War II that took place in the Pacific Ocean, its islands, and in East Asia, then called the Far East...
-- the China Burma India Theater, the South-East Asian Theatre
South-East Asian theatre of World War II
The South-East Asian Theatre of World War II was the name given to the campaigns of the Pacific War in Burma , Ceylon, India, Thailand, Indochina, Malaya and Singapore. Conflict in the theatre began when the Empire of Japan invaded Thailand and Malaya from bases located in Indochina on December 8,...
, and Manchurian Theatre
Soviet-Japanese War (1945)
The Soviet-Japanese War of 1945 , began on August 9, 1945, with the Soviet invasion of the Japanese puppet state of Manchukuo. The Soviets liberated Manchukuo, Mengjiang , northern Korea, southern Sakhalin, and the Kuril Islands...
-- had their own respective command structures, independent of PTO.)

The Pacific Theater of Operations was one of two areas in which the United States initiated offensive ground combat operations against the Axis powers
Axis Powers
The Axis powers , also known as the Axis alliance, Axis nations, Axis countries, or just the Axis, was an alignment of great powers during the mid-20th century that fought World War II against the Allies. It began in 1936 with treaties of friendship between Germany and Italy and between Germany and...
in late 1942. This included operations by the 32nd and the 41st Infantry Divisions on New Guinea
New Guinea campaign
The New Guinea campaign was one of the major military campaigns of World War II.Before the war, the island of New Guinea was split between:...
, and the 1st Marine Division on Guadalcanal
Guadalcanal campaign
The Guadalcanal Campaign, also known as the Battle of Guadalcanal and codenamed Operation Watchtower by Allied forces, was a military campaign fought between August 7, 1942 and February 9, 1943 on and around the island of Guadalcanal in the Pacific theatre of World War II...
. The other area was the Mediterranean Theater of Operations
Mediterranean Theater of Operations
The Mediterranean Theater of Operations, United States Army was originally called North African Theater of Operations and is an American term for the conflict that took place between the Allies and Axis Powers in North Africa and Italy during World War II...
, beginning with Operation Torch
Operation Torch
Operation Torch was the British-American invasion of French North Africa in World War II during the North African Campaign, started on 8 November 1942....
in November.

From mid-1942 until the end of the war in 1945, there were two operational commands in the PTO:

In addition, during 1945, General Carl Spaatz
Carl Spaatz
Carl Andrew "Tooey" Spaatz GBE was an American World War II general and the first Chief of Staff of the United States Air Force. He was of German descent.-Early life:...
commanded the separate U.S. Strategic Air Forces in the Pacific.


The Pacific Ocean theater was one of four major naval theatres of war of World War II
World War II
World War II, or the Second World War , was a global conflict lasting from 1939 to 1945, involving most of the world's nations—including all of the great powers—eventually forming two opposing military alliances: the Allies and the Axis...
, that pitted forces of the Japan
Empire of Japan
The Empire of Japan is the name of the state of Japan that existed from the Meiji Restoration on 3 January 1868 to the enactment of the post-World War II Constitution of...
against those of the United States
United States
The United States of America is a federal constitutional republic comprising fifty states and a federal district...
, the British Commonwealth, the Netherlands
Dutch East Indies
The Dutch East Indies was a Dutch colony that became modern Indonesia following World War II. It was formed from the nationalised colonies of the Dutch East India Company, which came under the administration of the Netherlands government in 1800....
and France.

The theater included most of the Pacific Ocean
Pacific Ocean
The Pacific Ocean is the largest of the Earth's oceanic divisions. It extends from the Arctic in the north to the Southern Ocean in the south, bounded by Asia and Australia in the west, and the Americas in the east.At 165.2 million square kilometres in area, this largest division of the World...
and its islands, excluding the Philippines
Philippines
The Philippines , officially known as the Republic of the Philippines , is a country in Southeast Asia in the western Pacific Ocean. To its north across the Luzon Strait lies Taiwan. West across the South China Sea sits Vietnam...
, Australia
Australia
Australia , officially the Commonwealth of Australia, is a country in the Southern Hemisphere comprising the mainland of the Australian continent, the island of Tasmania, and numerous smaller islands in the Indian and Pacific Oceans. It is the world's sixth-largest country by total area...
, the Netherlands East Indies
Dutch East Indies
The Dutch East Indies was a Dutch colony that became modern Indonesia following World War II. It was formed from the nationalised colonies of the Dutch East India Company, which came under the administration of the Netherlands government in 1800....
, the Territory of New Guinea
New Guinea
New Guinea is the world's second largest island, after Greenland, covering a land area of 786,000 km2. Located in the southwest Pacific Ocean, it lies geographically to the east of the Malay Archipelago, with which it is sometimes included as part of a greater Indo-Australian Archipelago...
(including the Bismarck Archipelago
Bismarck Archipelago
The Bismarck Archipelago is a group of islands off the northeastern coast of New Guinea in the western Pacific Ocean and is part of the Islands Region of Papua New Guinea.-History:...
) and the Solomon Islands
Solomon Islands
Solomon Islands is a sovereign state in Oceania, east of Papua New Guinea, consisting of nearly one thousand islands. It covers a land mass of . The capital, Honiara, is located on the island of Guadalcanal...
(which were part of the Southwest Pacific area.) The Pacific Ocean theater also excluded China
China
Chinese civilization may refer to:* China for more general discussion of the country.* Chinese culture* Greater China, the transnational community of ethnic Chinese.* History of China* Sinosphere, the area historically affected by Chinese culture...
and mainland Southeast Asia
Southeast Asia
Southeast Asia, South-East Asia, South East Asia or Southeastern Asia is a subregion of Asia, consisting of the countries that are geographically south of China, east of India, west of New Guinea and north of Australia. The region lies on the intersection of geological plates, with heavy seismic...
. It takes its name from 30 March 1942 when it became the major Allied
Allies of World War II
The Allies of World War II were the countries that opposed the Axis powers during the Second World War . Former Axis states contributing to the Allied victory are not considered Allied states...
command
Command (military formation)
A command in military terminology is an organisational unit that the individual in Military command has responsibility for. A Commander will normally be specifically appointed into the role in order to provide a legal framework for the authority bestowed...
in the theater, known simply as "Pacific Ocean Areas".

The Japanese Combined Fleet
Imperial Japanese Navy
The Imperial Japanese Navy was the navy of the Empire of Japan from 1869 until 1947, when it was dissolved following Japan's constitutional renunciation of the use of force as a means of settling international disputes...
was led by Admiral Isoroku Yamamoto
Isoroku Yamamoto
was a Japanese Naval Marshal General and the commander-in-chief of the Combined Fleet during World War II, a graduate of the Imperial Japanese Naval Academy and a student of Harvard University ....
, until he was killed in an attack by U.S. fighter planes in April 1943. Yamamoto was succeeded by Admiral Mineichi Koga
Mineichi Koga
- Notes :...
(1943–44) and Admiral Soemu Toyoda (1944–45). 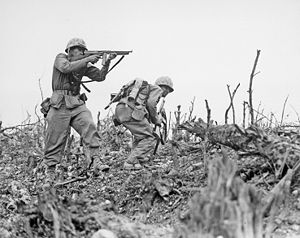