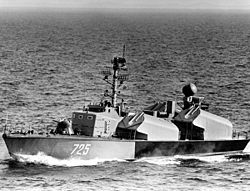 The doctrine
Military doctrine
Military doctrine is the concise expression of how military forces contribute to campaigns, major operations, battles, and engagements.It is a guide to action, not hard and fast rules. Doctrine provides a common frame of reference across the military...
behind the use of missile boats is based on the principle of mobility over defence. The advent of proper missile and electronic counter measure
Electronic warfare
Electronic warfare refers to any action involving the use of the electromagnetic spectrum or directed energy to control the spectrum, attack an enemy, or impede enemy assaults via the spectrum. The purpose of electronic warfare is to deny the opponent the advantage of, and ensure friendly...
technologies gave birth to the idea, that because a missile is far more accurate than a shell
Shell (projectile)
A shell is a payload-carrying projectile, which, as opposed to shot, contains an explosive or other filling, though modern usage sometimes includes large solid projectiles properly termed shot . Solid shot may contain a pyrotechnic compound if a tracer or spotting charge is used...
and can penetrate even the most heavily armored ship hulls
Hull (watercraft)
A hull is the watertight body of a ship or boat. Above the hull is the superstructure and/or deckhouse, where present. The line where the hull meets the water surface is called the waterline.The structure of the hull varies depending on the vessel type...
, warships should now be designed to outmaneuver their enemies and get to a better position first. Moreover, increasing the potency of shells requires employing larger projectiles, which necessities larger naval guns and consequently, larger platforms to carry these guns. This trend culminated in the giant battleship
Battleship
A battleship is a large armored warship with a main battery consisting of heavy caliber guns. Battleships were larger, better armed and armored than cruisers and destroyers. As the largest armed ships in a fleet, battleships were used to attain command of the sea and represented the apex of a...
s of WWII
World War II
World War II, or the Second World War , was a global conflict lasting from 1939 to 1945, involving most of the world's nations—including all of the great powers—eventually forming two opposing military alliances: the Allies and the Axis...
. The ability to deploy anti-ship missiles on small, maneuverable platforms seriously negates the advantages that were provided by larger ships in the era before the advent of guided missiles. A small missile boat, when equipped with sophisticated guided anti-ship missiles can pose a serious threat to even the largest of capital ship
Capital ship
The capital ships of a navy are its most important warships; they generally possess the heaviest firepower and armor and are traditionally much larger than other naval vessels...
s, and do so at much greater ranges than is possible with torpedoes.

The first use of missile boats was by the Egyptian Soviet-built Komar class
Komar class missile boat
The Soviet Project 183R class, more commonly known by its NATO reporting name Komar, is a class of missile boats, the first of its kind, built in the 1950s and 1960s. They also hold the distinction of being the first ships to sink another ship with anti-ship missiles.- Design :The Project 183 MTB...
craft fire of four SS-N-2 Styx missiles on the Israeli destroyer Eilat
HMS Zealous (R39)
HMS Zealous was a Z-class destroyer of the Royal Navy built in 1944 by Cammell Laird. She served during the Second World War, participating in operations in the North Sea and off the Norwegian coast, before taking part in some of the Arctic convoys...
on October 20 1967, shortly after the Six Day War, causing the latter's sinking with 47 dead.

The first naval missile battles between missile boats occurred between the Israel Navy (using indigenously-developed Gabriel missile
Gabriel missile
Gabriel missiles, created by Israel Aircraft Industries, are a range of anti-ship missiles that use the technique of sea-skimming.- Origin :...
s), and Syrian craft during the October 1973 Yom Kippur War
Yom Kippur War
The Yom Kippur War, Ramadan War or October War , also known as the 1973 Arab-Israeli War and the Fourth Arab-Israeli War, was fought from October 6 to 25, 1973, between Israel and a coalition of Arab states led by Egypt and Syria...
. The first of these engagements became known as the Battle of Latakia
Battle of Latakia
The Battle of Latakia was a small but revolutionary naval battle of the Yom Kippur War, fought on 7 October 1973, between Israel and Syria. It was the first naval battle in history to see combat between surface-to-surface missile-equipped missile boats and the use of electronic deception.At the...
. In these battles, some fifty Gabriels and a similar number of Styx missiles were fired, and seven Arab craft were sunk. 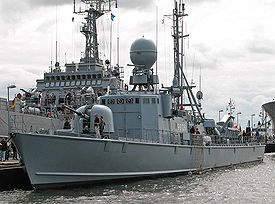 The term missile boat is also often used as a slang synonym for a Ballistic Missile Submarine, primarily used by US submariners.

Colloquially, and especially in video gaming, the term is applied to any offensive combat vehicle equipped with an extremely large number of guided or tracking munitions (such as the fictional Missile Boats seen in the Imperium (board game)
Imperium (board game)
Imperium is a science fiction board wargame that was published in 1977 by the Conflict Game Company and GDW. It was designed by Marc W. Miller and developed by Frank Chadwick and John Harshman. The game came in a cardboard box illustrated with a space battle on the exterior...
and the Star Wars: X-Wing
Star Wars: X-wing (series)
Star Wars: X-wing is a nine-book series of Star Wars novels by Michael A. Stackpole and Aaron Allston. Stackpole's contributions cover the adventures of a new Rogue Squadron formed by Wedge Antilles, while Allston's focus on Wraith Squadron, another creation of Antilles'. The first seven novels...
game series).
The source of this article is wikipedia, the free encyclopedia.  The text of this article is licensed under the GFDL.