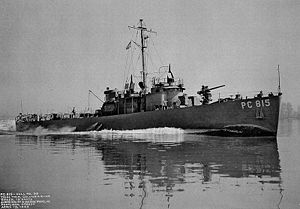 A submarine chaser is a small and fast naval
Navy
A navy is the branch of a nation's armed forces principally designated for naval and amphibious warfare; namely, lake- or ocean-borne combat operations and related functions...
vessel
Ship
Since the end of the age of sail a ship has been any large buoyant marine vessel. Ships are generally distinguished from boats based on size and cargo or passenger capacity. Ships are used on lakes, seas, and rivers for a variety of activities, such as the transport of people or goods, fishing,...
specially intended for anti-submarine warfare
Anti-submarine warfare
Anti-submarine warfare is a branch of naval warfare that uses surface warships, aircraft, or other submarines to find, track and deter, damage or destroy enemy submarines....
. Although similar vessels were designed and used by many nations, this designation was most famously used by ships built by the United States of America (US). Many of the US World War I
World War I
World War I , which was predominantly called the World War or the Great War from its occurrence until 1939, and the First World War or World War I thereafter, was a major war centred in Europe that began on 28 July 1914 and lasted until 11 November 1918...
sub-chasers found their way to friendly powers by way of Lend-Lease
Lend-Lease
Lend-Lease was the program under which the United States of America supplied the United Kingdom, the Soviet Union, China, Free France, and other Allied nations with materiel between 1941 and 1945. It was signed into law on March 11, 1941, a year and a half after the outbreak of war in Europe in...
in World War II
World War II
World War II, or the Second World War , was a global conflict lasting from 1939 to 1945, involving most of the world's nations—including all of the great powers—eventually forming two opposing military alliances: the Allies and the Axis...
.

United States
United States
The United States of America is a federal constitutional republic comprising fifty states and a federal district...
submarine chasers were designed specifically to destroy German submarines in World War I, and Japanese
Empire of Japan
The Empire of Japan is the name of the state of Japan that existed from the Meiji Restoration on 3 January 1868 to the enactment of the post-World War II Constitution of...
and German submarines in World War II. The small 110 feet (33.5 m) patrol craft of the design first used in World War I carried the hull designator SC (for Submarine, Chaser). Their main weapon was the depth charge. They also carried machine gun
Machine gun
A machine gun is a fully automatic mounted or portable firearm, usually designed to fire rounds in quick succession from an ammunition belt or large-capacity magazine, typically at a rate of several hundred rounds per minute....
s and anti-aircraft guns. Larger 173 feet (52.7 m) sub chasers used the PC hull classification symbol
Hull classification symbol
The United States Navy, United States Coast Guard, and United States National Oceanic and Atmospheric Administration use hull classification symbols to identify their ship types and each individual ship within each type...
(for Patrol, Coastal).

In early 1915 the British Admiralty
Admiralty
The Admiralty was formerly the authority in the Kingdom of England, and later in the United Kingdom, responsible for the command of the Royal Navy...
selected the US Elco
Electric Launch Company
The Electric Launch Company, later renamed Elco Motor Yachts, is a United States boat building and electric motor company that has operated from 1893 until present . It was originally run by Henry R. Sutphen in 1895...
company for the production of 50 Motor Launch
Motor Launch
A Motor Launch is a small military vessel in British navy service. It was designed for harbour defence and submarine chasing or for armed high speed air-sea rescue....
es for anti-submarine work, British industry being at maximum capacity. This order was then increased by a further 500. The whole order was completed by November 1916 and entered Royal Navy
Royal Navy
The Royal Navy is the naval warfare service branch of the British Armed Forces. Founded in the 16th century, it is the oldest service branch and is known as the Senior Service...
service. The vessels were 80 feet (24.4 m) in length and capable of 20 knots (39.2 km/h). They were armed in use with a 3-pounder gun, towed paravane
Paravane (weapon)
The paravane is a form of towed underwater "glider". It was developed by Cdr Usborne and Lt Burney financed by Sir George White, founder of the Bristol Aeroplane Company....
s and later depth charge
Depth charge
A depth charge is an anti-submarine warfare weapon intended to destroy or cripple a target submarine by the shock of exploding near it. Most use explosives and a fuze set to go off at a preselected depth in the ocean. Depth charges can be dropped by either surface ships, patrol aircraft, or from...
s.

The British sub chasers were operated around the coast in defence. However they were uncomfortable, wet, and not suited to British sea conditions. Although used during the First World War they were sold off when the war ended.

Submarine chasers were used mostly by the United States Coast Guard
United States Coast Guard
The United States Coast Guard is a branch of the United States Armed Forces and one of the seven U.S. uniformed services. The Coast Guard is a maritime, military, multi-mission service unique among the military branches for having a maritime law enforcement mission and a federal regulatory agency...
in World War II for destroying German U-boats that were stationed off the coast of the United States
United States
The United States of America is a federal constitutional republic comprising fifty states and a federal district...
, trying to sink merchant convoys as the convoys departed American ports. By the end of World War II, submarine chasers had sunk around 67 German U-boats. In the Pacific Theatre
Pacific War
The Pacific War, also sometimes called the Asia-Pacific War refers broadly to the parts of World War II that took place in the Pacific Ocean, its islands, and in East Asia, then called the Far East...
, submarine chasers were used for amphibious landings
Amphibious warfare
Amphibious warfare is the use of naval firepower, logistics and strategy to project military power ashore. In previous eras it stood as the primary method of delivering troops to non-contiguous enemy-held terrain...
, courier and escort duty.

They were mostly withdrawn after World War II and replaced with corvette
Corvette
A corvette is a small, maneuverable, lightly armed warship, originally smaller than a frigate and larger than a coastal patrol craft or fast attack craft , although many recent designs resemble frigates in size and role...
s, frigate
Frigate
A frigate is any of several types of warship, the term having been used for ships of various sizes and roles over the last few centuries.In the 17th century, the term was used for any warship built for speed and maneuverability, the description often used being "frigate-built"...
s, and destroyers. A few are still in service with Third World
Third World
The term Third World arose during the Cold War to define countries that remained non-aligned with either capitalism and NATO , or communism and the Soviet Union...
navies.