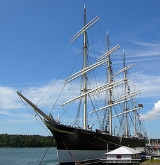 Mariehamn is the capital of Åland, an autonomous territory under Finnish
Finland
Finland , officially the Republic of Finland, is a Nordic country situated in the Fennoscandian region of Northern Europe. It is bordered by Sweden in the west, Norway in the north and Russia in the east, while Estonia lies to its south across the Gulf of Finland.Around 5.4 million people reside...
sovereignty
Sovereignty
Sovereignty is the quality of having supreme, independent authority over a geographic area, such as a territory. It can be found in a power to rule and make law that rests on a political fact for which no purely legal explanation can be provided...
. Mariehamn is the seat of the Government
Government of Åland
The Landskapsregering is the government of Åland, an autonomous territory of Finland. The government is led by a Lantråd, the premier of Åland, who is elected by the Lagting, the parliament of Åland.-List of Premiers of Åland :...
and Parliament of Åland
Parliament of Åland
The Lagting, or Lagtinget, is the parliament of Åland, an autonomous, demilitarised and unilingually Swedish-speaking territory of Finland. The Lagting has 30 seats.- Elections :- See also :*Government of Åland, or Ålands landskapsregering...
, and 40% of the population of Åland live in the city. Like all of Åland, Mariehamn is unilingually Swedish-speaking
Swedish language
Swedish is a North Germanic language, spoken by approximately 10 million people, predominantly in Sweden and parts of Finland, especially along its coast and on the Åland islands. It is largely mutually intelligible with Norwegian and Danish...
and around of the inhabitants speak it as their native language.

The town was named after Maria Alexandrovna, the Empress consort of Alexander II of Russia
Alexander II of Russia
Alexander II , also known as Alexander the Liberator was the Emperor of the Russian Empire from 3 March 1855 until his assassination in 1881...
. Mariehamn was founded in 1861, around the village of Övernäs, in what was at the time part of the municipality of Jomala
Jomala
Jomala is a municipality of Åland, an autonomous territory of Finland.The municipality has a population of and covers an area of of which is water...
. The city has since expanded and incorporated more of Jomala territory. The city is located on a peninsula
Peninsula
A peninsula is a piece of land that is bordered by water on three sides but connected to mainland. In many Germanic and Celtic languages and also in Baltic, Slavic and Hungarian, peninsulas are called "half-islands"....
, and has two important harbours, one located on the western shore and one on the eastern shore. The Western Harbour is an important international harbour with daily traffic to Sweden
Sweden
Sweden , officially the Kingdom of Sweden , is a Nordic country on the Scandinavian Peninsula in Northern Europe. Sweden borders with Norway and Finland and is connected to Denmark by a bridge-tunnel across the Öresund....
and mainland Finland
Finland
Finland , officially the Republic of Finland, is a Nordic country situated in the Fennoscandian region of Northern Europe. It is bordered by Sweden in the west, Norway in the north and Russia in the east, while Estonia lies to its south across the Gulf of Finland.Around 5.4 million people reside...
. A powerful incentive for Baltic ferries to stop at Mariehamn is that, with respect to indirect taxation, Åland is not part of the EU customs zone and so duty-free goods can be sold aboard. Mariehamn Airport
Mariehamn Airport
Mariehamn Airport is located in Jomala, Åland, Finland, some north-west of Mariehamn town centre. It served 48,672 passengers in 2010 and is operated by the state owned Finavia....
is located in the neighbouring municipality of Jomala, some 3 kilometres (2 mi) north-west of Mariehamn city centre.

Åland and Mariehamn have a reputable heritage in shipping. The Flying P-Liner
Flying P-Liner
The Flying P-Liners were the sailing ships of the German shipping company F. Laeisz of Hamburg.The company was founded in 1824 by Ferdinand Laeisz as a hat manufacturing company. He was quite successful and distributed his hats even in South America...
Pommern
Pommern (ship)
The Pommern, formerly the Mneme , is a windjammer. She is a four-masted barque that was built in 1903 in Glasgow at the J. Reid & Co shipyard....
museum ship
Museum ship
A museum ship, or sometimes memorial ship, is a ship that has been preserved and converted into a museum open to the public, for educational or memorial purposes...
is anchored in the Western Harbour. The Eastern Harbour features one of the largest marinas in Scandinavia
Scandinavia
Scandinavia is a cultural, historical and ethno-linguistic region in northern Europe that includes the three kingdoms of Denmark, Norway and Sweden, characterized by their common ethno-cultural heritage and language. Modern Norway and Sweden proper are situated on the Scandinavian Peninsula,...
. The famous Dutch steamer Jan Nieveen (now called F.P. von Knorring, after Åland teacher and vicar Frans Peter von Knorring
Frans Peter von Knorring
Frans Peter von Knorring, was a social reformer on the Åland Islands. He was the vicar of Finström from 1834 to 1875 and he organized the educational system in Åland. He started an elementary school at Godby in 1853. The school's syllabus included subjects related to farming...
) can also be found here.

Mariehamn features several buildings drawn by Finnish architect Lars Sonck
Lars Sonck
Lars Eliel Sonck was a Finnish architect. He graduated from Helsinki Polytechnic Institute in 1894 and immediately won a major design competition for a church in Turku, ahead of many established architects.Sonck ignored the growing trend toward architectural rationalism...
, who moved to Åland as a child. Buildings drawn by him include the church of Mariehamn (1927), the main building of the Åland Maritime College (1927) and the town hall (1939). Hilda Hongell
Hilda Hongell
Hilda Hongell was the first female "master builder" in Finland, and is sometimes described as the first female architect in Finland.-Early years:...
has also designed several buildings, although only a few are still standing. 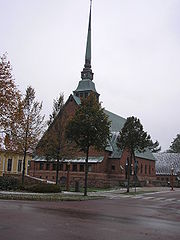 A chart on population growth.

Mariehamn is twinned with: Kópavogur
Kópavogur
Kópavogur is a city and Iceland's second largest municipality, with a population of 30,779.It lies immediately south of Reykjavík and is part of the Greater Reykjavík Area. The name literally means seal pup bay...
, Iceland
Iceland
Iceland , described as the Republic of Iceland, is a Nordic and European island country in the North Atlantic Ocean, on the Mid-Atlantic Ridge. Iceland also refers to the main island of the country, which contains almost all the population and almost all the land area. The country has a population...
Kragerø
Kragerø
is a town and municipality in Telemark county, Norway. It is part of the traditional region of Vestmar. The administrative centre of the municipality is the town of Kragerø....
, Norway
Norway
Norway , officially the Kingdom of Norway, is a Nordic unitary constitutional monarchy whose territory comprises the western portion of the Scandinavian Peninsula, Jan Mayen, and the Arctic archipelago of Svalbard and Bouvet Island. Norway has a total area of and a population of about 4.9 million...
Kuressaare
Kuressaare
Kuressaare is a town and a municipality on Saaremaa island in Estonia. It is the capital of Saare County. The current population is about 14,706 Kuressaare is a town and a municipality on Saaremaa island in Estonia. It is the capital of Saare County. The current population is about 14,706...
, Estonia
Estonia
Estonia , officially the Republic of Estonia , is a state in the Baltic region of Northern Europe. It is bordered to the north by the Gulf of Finland, to the west by the Baltic Sea, to the south by Latvia , and to the east by Lake Peipsi and the Russian Federation . Across the Baltic Sea lies...
Lomonosov
Lomonosov, Russia
Lomonosov is a municipal town in Petrodvortsovy District of the federal city of St. Petersburg, Russia, situated on the southern coast of the Gulf of Finland, west of St. Petersburg proper. Population:...
, Russia
Russia
Russia or , officially known as both Russia and the Russian Federation , is a country in northern Eurasia. It is a federal semi-presidential republic, comprising 83 federal subjects...
Slagelse
Slagelse
Slagelse, a town in east Denmark, is in Slagelse municipality on the island of Zealand. It is about 100 km southwest of Copenhagen. The population is 31,979 ....
, Denmark
Denmark
Denmark is a Scandinavian country in Northern Europe. The countries of Denmark and Greenland, as well as the Faroe Islands, constitute the Kingdom of Denmark . It is the southernmost of the Nordic countries, southwest of Sweden and south of Norway, and bordered to the south by Germany. Denmark...
Tórshavn
Tórshavn
Tórshavn is the capital and largest town of the Faroe Islands. It is located in the southern part on the east coast of Streymoy. To the north west of the town lies the high mountain Húsareyn, and to the southwest, the high Kirkjubøreyn...
, Faroe Islands
Faroe Islands
The Faroe Islands are an island group situated between the Norwegian Sea and the North Atlantic Ocean, approximately halfway between Scotland and Iceland. The Faroe Islands are a self-governing territory within the Kingdom of Denmark, along with Denmark proper and Greenland...
Valkeakoski
Valkeakoski
Valkeakoski is a town and municipality in Finland.Valkeakoski is located south of Tampere and north of Helsinki in the province of Western Finland and is part of the Pirkanmaa region. The municipality has a population of...
, Finland
Finland
Finland , officially the Republic of Finland, is a Nordic country situated in the Fennoscandian region of Northern Europe. It is bordered by Sweden in the west, Norway in the north and Russia in the east, while Estonia lies to its south across the Gulf of Finland.Around 5.4 million people reside...
Visby
Visby
-See also:* Battle of Visby* Gotland University College* List of governors of Gotland County-External links:* - Visby*...
, Sweden
Sweden
Sweden , officially the Kingdom of Sweden , is a Nordic country on the Scandinavian Peninsula in Northern Europe. Sweden borders with Norway and Finland and is connected to Denmark by a bridge-tunnel across the Öresund....