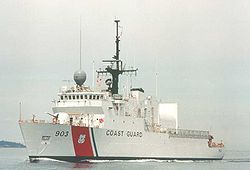 Cutter is the term used by the United States Coast Guard
United States Coast Guard
The United States Coast Guard is a branch of the United States Armed Forces and one of the seven U.S. uniformed services. The Coast Guard is a maritime, military, multi-mission service unique among the military branches for having a maritime law enforcement mission and a federal regulatory agency...
for its commissioned
Ship commissioning
Ship commissioning is the act or ceremony of placing a ship in active service, and may be regarded as a particular application of the general concepts and practices of project commissioning. The term is most commonly applied to the placing of a warship in active duty with its country's military...
vessels. A Cutter is 65 feet (19.8 m) or greater in length, has a permanently assigned crew, and has accommodations for the crew to live aboard. They carry the ship prefix
Ship prefix
A ship prefix is a combination of letters, usually abbreviations, used in front of the name of a civilian or naval ship.Prefixes for civilian vessels may either identify the type of propulsion, such as "SS" for steamship, or purpose, such as "RV" for research vessel. Civilian prefixes are often...
USCGC.


History of the USCG cutters

The Revenue Marine and the Revenue Cutter Service, as it was known variously throughout the late 18th and the 19th centuries, referred to its ships as cutters. The term is English in origin and refers to a specific type of vessel, namely, "a small, decked ship with one mast
Mast (sailing)
The mast of a sailing vessel is a tall, vertical, or near vertical, spar, or arrangement of spars, which supports the sails. Large ships have several masts, with the size and configuration depending on the style of ship...
and bowsprit
Bowsprit
The bowsprit of a sailing vessel is a pole extending forward from the vessel's prow. It provides an anchor point for the forestay, allowing the fore-mast to be stepped farther forward on the hull.-Origin:...
, with a gaff
Gaff rig
Gaff rig is a sailing rig in which the sail is four-cornered, fore-and-aft rigged, controlled at its peak and, usually, its entire head by a spar called the gaff...
mainsail
Mainsail
A mainsail is a sail located behind the main mast of a sailing vessel.On a square rigged vessel, it is the lowest and largest sail on the main mast....
on a boom
Boom (sailing)
In sailing, a boom is a spar , along the foot of a fore and aft rigged sail, that greatly improves control of the angle and shape of the sail. The primary action of the boom is to keep the foot of the sail flatter when the sail angle is away from the centerline of the boat. The boom also serves...
, a square yard and topsail
Topsail
A topsail is a sail set above another sail; on square-rigged vessels further sails may be set above topsails.- Square rig :On a square rigged vessel, a topsail is a square sail rigged above the course sail and below the topgallant sail where carried...
, and two jib
Jib
A jib is a triangular staysail set ahead of the foremast of a sailing vessel. Its tack is fixed to the bowsprit, to the bow, or to the deck between the bowsprit and the foremost mast...
s or a jib and a staysail
Staysail
A staysail is a fore-and-aft rigged sail whose luff can be affixed to a stay running forward from a mast to the deck, the bowsprit or to another mast....
." By general usage, that term came to define any vessel of Great Britain's HM Customs and Excise and the term was adopted by the U.S. Treasury Department at the creation of what would become the Revenue Marine. Since that time, no matter what the vessel type, the service has referred to its vessels with permanently assigned crews as cutters. 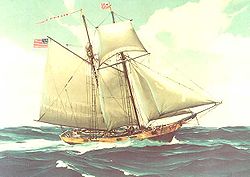 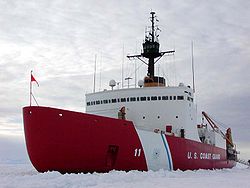 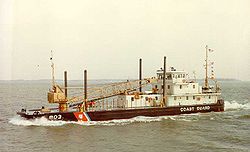 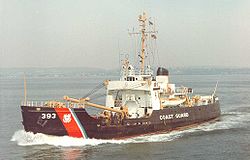 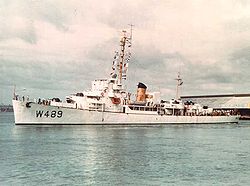