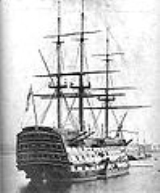 A flagship is a vessel used by the commanding officer
Commanding officer
The commanding officer is the officer in command of a military unit. Typically, the commanding officer has ultimate authority over the unit, and is usually given wide latitude to run the unit as he sees fit, within the bounds of military law...
of a group of naval
Navy
A navy is the branch of a nation's armed forces principally designated for naval and amphibious warfare; namely, lake- or ocean-borne combat operations and related functions...
ships, reflecting the custom of its commander, characteristically a flag officer
Flag Officer
A flag officer is a commissioned officer in a nation's armed forces senior enough to be entitled to fly a flag to mark where the officer exercises command. The term usually refers to the senior officers in an English-speaking nation's navy, specifically those who hold any of the admiral ranks; in...
, flying a distinguishing flag. Used more loosely, it is the lead ship in a fleet of vessels, typically the first, largest, fastest, most heavily armed, or, in terms of media coverage, best known.

Over the years the term "flagship" has been borrowed in metaphor
Metaphor
A metaphor is a literary figure of speech that uses an image, story or tangible thing to represent a less tangible thing or some intangible quality or idea; e.g., "Her eyes were glistening jewels." Metaphor may also be used for any rhetorical figures of speech that achieve their effects via...
ic form by industries such as broadcasting, automobiles, education, and retailing to refer to their highest profile or most expensive products and outlets.

In common naval use the term "flagship" is fundamentally a temporary designation; the flagship is wherever the admiral
Admiral
Admiral is the rank, or part of the name of the ranks, of the highest naval officers. It is usually considered a full admiral and above vice admiral and below admiral of the fleet . It is usually abbreviated to "Adm" or "ADM"...
's flag is being flown. However, admirals have always needed additional facilities; a meeting room large enough to hold all the captains of the fleet, and a place for the admiral's staff to make plans and draw up orders.

In the 20th century, ships became large enough that most types could accommodate a commander and staff, and during World War II
World War II
World War II, or the Second World War , was a global conflict lasting from 1939 to 1945, involving most of the world's nations—including all of the great powers—eventually forming two opposing military alliances: the Allies and the Axis...
admirals would often prefer a faster ship over the largest one. Some larger ships may have a separate flag bridge for use by the admiral and his staff while the captain commanded from the main navigation bridge. Because its primary function is to coordinate a fleet, a flagship is not necessarily more heavily armed or fortified than other ships. Increasing communications and computing requirements have resulted in the design of specialized command and control
Command and Control (military)
Command and control, or C2, in a military organization can be defined as the exercise of authority and direction by a properly designated commanding officer over assigned and attached forces in the accomplishment of the mission...
ships to serve as flagship.

A private ship is a warship which has no flag officer on board, and thus is not a flagship.

As with so many other naval terms, flagship has crossed over into common parlance, where it means the most important or leading member of a group. It has also come to be an adjective describing the most prominent or highly touted product, brand, location, or service among those offered by a company. It now has common derivations such as the "flagship brand" or "flagship product" of a manufacturing
Manufacturing
Manufacturing is the use of machines, tools and labor to produce goods for use or sale. The term may refer to a range of human activity, from handicraft to high tech, but is most commonly applied to industrial production, in which raw materials are transformed into finished goods on a large scale...
company or "flagship store" of a retail chain. Auto companies usually have a flagship in the form of their most important and highest-priced car.

Flagship stores are core stores for brand name retailers, larger than their standard outlets and stocking greater inventory, often found in prominent shopping districts such as Madison Avenue in New York and Tokyo's Ginza
Ginza
is a district of Chūō, Tokyo, located south of Yaesu and Kyōbashi, west of Tsukiji, east of Yūrakuchō and Uchisaiwaichō, and north of Shinbashi.It is known as an upscale area of Tokyo with numerous department stores, boutiques, restaurants and coffeehouses. Ginza is recognized as one of the most...
.

Flagships are prevalent among upscale retailers, including such familiar names as Polo Ralph Lauren
Polo Ralph Lauren
Ralph Lauren Corporation is a luxury clothing and goods company of the American fashion designer Ralph Lauren. Ralph Lauren specializes in high-end casual/semi-formal wear for men and women, as well as accessories, fragrances, home and housewares...
, Louis Vuitton
Louis Vuitton
Louis Vuitton Malletier – commonly referred to as Louis Vuitton , or shortened to LV – is a French fashion house founded in 1854 by Louis Vuitton. The label is well known for its LV monogram, which is featured on most products, ranging from luxury trunks and leather goods to ready-to-wear, shoes,...
, Coach, and Prada
Prada
Prada S.p.A. is an Italian fashion label specializing in luxury goods for men and women , founded by Mario Prada.-Foundations:...
.

A flagship station is the principal station of a (radio
Radio network
There are two types of radio networks currently in use around the world: the one-to-many broadcast type commonly used for public information and mass media entertainment; and the two-way type used more commonly for public safety and public services such as police, fire, taxicabs, and delivery...
or TV) broadcast network
Broadcast network
A broadcast network is an organization, such as a corporation or other voluntary association, that provides live television or recorded content, such as movies, newscasts, sports, Public affairs programming, and other television programs for broadcast over a group of radio stations or television...
. It can be the station that produces the largest amount of material for the network, or the station in the parent company's home city, or both. The term dates back to the mid twentieth century years of broadcasting when headquarters stations produced programs for their networks.

In sports broadcasting, the "flagship" is a team's primary station in their home market, which produces game broadcasts and feeds them to affiliate
Affiliate
An affiliate is a commercial entity with a relationship with a peer or a larger entity.- Corporate structure :A corporation may be referred to as an affiliate of another when it is related to it but not strictly controlled by it, as with a subsidiary relationship, or when it is desired to avoid...
s. For example, WGN
WGN (AM)
WGN is a radio station in Chicago, Illinois, USA. It is the only radio station owned by the Tribune Company, which also owns the flagship television station WGN-TV, the Chicago Tribune newspaper and Chicago magazine locally. WGN's transmitter is located in Elk Grove Village, Illinois...
is the flagship station of the Chicago Cubs
Chicago Cubs
The Chicago Cubs are a professional baseball team located in Chicago, Illinois. They are members of the Central Division of Major League Baseball's National League. They are one of two Major League clubs based in Chicago . The Cubs are also one of the two remaining charter members of the National...
baseball team, which has an extensive Cubs radio network
Chicago Cubs Radio Network
The Chicago Cubs Radio Network comprises 45 stations in eleven states. It is a division of Tribune Broadcasting's Tribune Radio Network.The Cubs' flagship station is WGN, 720 AM. Pat Hughes is the play-by-play announcer, with Keith Moreland serving as color commentator as of the 2011 season...
spanning several states.

The term "halo car" is often used in automotive marketing and journalism to refer to the flagship vehicle. The term is derived from the halo effect
Halo effect
The halo effect is a cognitive bias whereby one trait influences another trait or traits of that person or object. This is very common among physically attractiveness...
, the tendency for a favorable trait to influence the perception of subsequent traits in a sequence of interpretations; it appears to have been used as early as 1938.

According to Robert M. Berdahl
Robert M. Berdahl
Robert M. Berdahl is an American historian, author and university administrator. He was chancellor of the University of California, Berkeley from 1997 to 2004, and became president of the Association of American Universities from May 2006 to June 2011.-External links:*...
, former Berkeley
University of California, Berkeley
The University of California, Berkeley , is a teaching and research university established in 1868 and located in Berkeley, California, USA...
chancellor, the phrase "flagship" came into existence in the 1950s when the Morrill Act
Morrill Land-Grant Colleges Act
The Morrill Land-Grant Acts are United States statutes that allowed for the creation of land-grant colleges, including the Morrill Act of 1862 and the Morrill Act of 1890 -Passage of original bill:...
schools were joined by newer institutions built in a wave of post-war expansion of state university system.

Berdahl contends that because of their age, the flagship institutions of a university system are often the largest and best financed and are perceived as elite relative to non-flagship state schools. He comments that "Those of us in "systems" of higher education are frequently actively discouraged from using the term "flagship" to refer to our campuses because it is seen as hurtful to the self-esteem of colleagues at other institutions in our systems. The use of the term is seen by some as elitist and boastful. It is viewed by many, in the context of the politics of higher education, as 'politically incorrect.' ... Only in the safe company of alumni is one permitted to use the term."

Nevertheless, some state universities and their officials still use the term "flagship" in official contexts. For example, "As the system's flagship campus, [UMass-]Amherst draws from throughout the Commonwealth, the nation and the world;" and "It is a pleasure to report to the General Assembly on the accomplishments and initiatives of the State [of Maryland]'s Flagship University."

Within conservation biology, the term flagship species refers to a species or taxon that is a symbol or rallying point to catalyze conservation actions. The metaphoric use of the term is inherently linked to ideas about representation.
The source of this article is wikipedia, the free encyclopedia.  The text of this article is licensed under the GFDL.