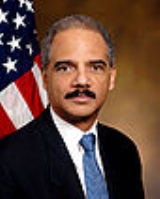 The current attorney general, Eric Holder
Eric Holder
Eric Himpton Holder, Jr. is the 82nd and current Attorney General of the United States and the first African American to hold the position, serving under President Barack Obama....
, was confirmed to office by the Senate on February 2, 2009, and sworn into office on February 3, 2009. Holder is the 82nd United States Attorney General and the first African-American to hold the position.