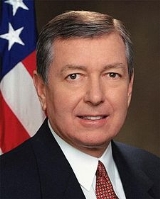 Overview
John David Ashcroft is a United States politician who served as the 79th United States Attorney General
United States Attorney General
The United States Attorney General is the head of the United States Department of Justice concerned with legal affairs and is the chief law enforcement officer of the United States government. The attorney general is considered to be the chief lawyer of the U.S. government...
, from 2001 until 2005, appointed by President George W. Bush
George W. Bush
George Walker Bush is an American politician who served as the 43rd President of the United States, from 2001 to 2009. Before that, he was the 46th Governor of Texas, having served from 1995 to 2000....
. Ashcroft previously served as the 50th Governor of Missouri (1985–1993) and a U.S. Senator
United States Senate
The United States Senate is the upper house of the bicameral legislature of the United States, and together with the United States House of Representatives comprises the United States Congress. The composition and powers of the Senate are established in Article One of the U.S. Constitution. Each...
from Missouri
Missouri
Missouri is a US state located in the Midwestern United States, bordered by Iowa, Illinois, Kentucky, Tennessee, Arkansas, Oklahoma, Kansas and Nebraska. With a 2010 population of 5,988,927, Missouri is the 18th most populous state in the nation and the fifth most populous in the Midwest. It...
(1995–2001).
Ashcroft was born in Chicago
Chicago
Chicago is the largest city in the US state of Illinois. With nearly 2.7 million residents, it is the most populous city in the Midwestern United States and the third most populous in the US, after New York City and Los Angeles...
, Illinois
Illinois
Illinois is the fifth-most populous state of the United States of America, and is often noted for being a microcosm of the entire country. With Chicago in the northeast, small industrial cities and great agricultural productivity in central and northern Illinois, and natural resources like coal,...
, to James Robert Ashcroft and Grace P. (née Larsen). His father was a minister, in an Assemblies of God congregation, and served as president of Evangel University
Evangel University
Evangel University is the national university of arts, sciences and professions in Springfield, Missouri. Evangel College was renamed Evangel University on June 8, 1998. The campus sits on that were originally part of . The first President of Evangel was Klaude Kendrick who served from 1955-1958....
from 1958–1974, and jointly as President of Central Bible College
Central Bible College
Central Bible College is a private coed Bible college for the Assemblies of God. It was founded in 1922 with the main campus being located in Springfield, Missouri. The college has a Bible-centered curriculum designed to educate and train ministers, missionaries, and Christian workers...
from 1958–1963.

The objective of securing the safety of Americans from crime and terror has been achieved.

To those who scare peace-loving people with phantoms of lost liberty, my message is this: Your tactics only aid terrorists, for they erode our national unity and diminish our resolve. They give ammunition to America's enemies, and pause to America's friends. They encourage people of good will to remain silent in the face of evil.

Unique among the nations, America recognized the source of our character as being godly and eternal, not being civic and temporal. And because we have understood that our source is eternal, America has been different. We have no king but Jesus.