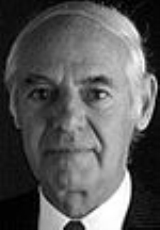 Encyclopedia
William French Smith was an American lawyer and the 74th Attorney General of the United States.

Born in Wilton, New Hampshire
Wilton, New Hampshire
- Demographics :As of the census of 2000, there were 3,743 people, 1,410 households, and 1,023 families living in the town. The population density was 145.3 people per square mile . There were 1,451 housing units at an average density of 56.3 per square mile...
, he received his A.B.
Bachelor of Arts
A Bachelor of Arts , from the Latin artium baccalaureus, is a bachelor's degree awarded for an undergraduate course or program in either the liberal arts, the sciences, or both...
degree, summa cum laude, from the University of California at Los Angeles in 1939, and his law degree from Harvard Law School
Harvard Law School
Harvard Law School is one of the professional graduate schools of Harvard University. Located in Cambridge, Massachusetts, it is the oldest continually-operating law school in the United States and is home to the largest academic law library in the world. The school is routinely ranked by the U.S...
in 1942.

From 1942 to 1946, Mr. Smith served in the United States Naval Reserve, reaching the rank of lieutenant
Lieutenant
A lieutenant is a junior commissioned officer in many nations' armed forces. Typically, the rank of lieutenant in naval usage, while still a junior officer rank, is senior to the army rank...
. In 1946 he joined the law firm of Gibson, Dunn & Crutcher LLP in Los Angeles, where he was a senior partner when in 1980 he was nominated Attorney General by then President-Elect
President of the United States
The President of the United States of America is the head of state and head of government of the United States. The president leads the executive branch of the federal government and is the commander-in-chief of the United States Armed Forces....
Ronald Reagan
Ronald Reagan
Ronald Wilson Reagan was the 40th President of the United States , the 33rd Governor of California and, prior to that, a radio, film and television actor....
. Smith was a member of the American Law Institute
American Law Institute
The American Law Institute was established in 1923 to promote the clarification and simplification of American common law and its adaptation to changing social needs. The ALI drafts, approves, and publishes Restatements of the Law, Principles of the Law, model codes, and other proposals for law...
, American Judicature Society
American Judicature Society
The American Judicature Society is an independent, nonpartisan, national organization of judges, lawyers, and interested members of the public whose mission is to improve the American justice system - to "secure and promote an independent and qualified judiciary and fair system of justice." ...
, and the Institute of Judicial Administration's Board of Fellows, as well as a fellow of the American Bar Foundation
American Bar Foundation
Established in 1952, the ' is an independent, nonprofit national research institute located in Chicago, Illinois committed to objective empirical research on law and legal institutions...
. He served as Attorney General from 1981 to 1985 and then joined the President's Foreign Intelligence Advisory Board
President's Foreign Intelligence Advisory Board
The President's Intelligence Advisory Board is an advisor to the Executive Office of the President of the United States. According to its self-description, it "...provides advice to the President concerning the quality and adequacy of intelligence collection, of analysis and estimates, of...
.

He died in 1990, aged 73, from cancer
Cancer
Cancer , known medically as a malignant neoplasm, is a large group of different diseases, all involving unregulated cell growth. In cancer, cells divide and grow uncontrollably, forming malignant tumors, and invade nearby parts of the body. The cancer may also spread to more distant parts of the...
and was interred at Forest Lawn Memorial Park in Glendale, California
Glendale, California
Glendale is a city in Los Angeles County, California, United States. As of the 2010 Census, the city population is 191,719, down from 194,973 at the 2000 census. making it the third largest city in Los Angeles County and the 22nd largest city in the state of California...
.