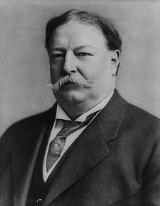 Born in 1857 in Cincinnati, Ohio, into the powerful Taft family
Taft family
The Taft family of the United States hails from Cincinnati, Ohio, with historic origins in Massachusetts; its members have served Ohio, Massachusetts, Vermont, Rhode Island, Utah, and the United States in various positions, such as Governor of Ohio, Governor of Rhode Island, U.S. Senator , U.S...
, "Big Bill" graduated from Yale College
Yale College
Yale College was the official name of Yale University from 1718 to 1887. The name now refers to the undergraduate part of the university. Each undergraduate student is assigned to one of 12 residential colleges.-Residential colleges:...
as a Phi Beta Kappa in 1878 and from Cincinnati Law School in 1880.

We are all imperfect. We can not expect perfect government.

I have come to the conclusion that the major part of the work of a President is to increase the gate receipts of expositions and fairs and bring tourists to town.

I am in favor of helping the prosperity of all countries because, when we are all prosperous, the trade of each becomes more valuable to the other.

Address at the Hotel Fairmont in San Francisco (6 October 1909)

I love judges, and I love courts. They are my ideals, that typify on earth what we shall meet hereafter in heaven under a just God.

The intoxication of power rapidly sobers off in the knowledge of its restrictions and under the prompt reminder of an ever-present and not always considerate press, as well as the kindly suggestions that not infrequently come from Congress.

The diplomacy of the present administration has sought to respond to modern ideas of commercial intercourse. This policy has been characterized as substituting dollars for bullets. It is one that appeals alike to idealistic humanitarian sentiments, to the dictates of sound policy and strategy, and to legitimate commercial aims.