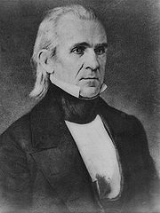 I believe that James Polk was a religious man and delayed taking the oath of office because March 4th was a Sunday. For one day his President Pro Tem...
More

Foreign powers do not seem to appreciate the true character of our Government.

The world has nothing to fear from military ambition in our Government.

The passion for office among members of Congress is very great, if not absolutely disreputable, and greatly embarrasses the operations of the government. They create offices by their own votes and then seek to fill them themselves.

Thank God, under our Constitution there was no connection between church and state.

There is more selfishness and less principle among members of Congress, as well as others, than I had any conception [of], before I became President of the U.S.

With me it is emphatically true that the presidency is "no bed of roses."