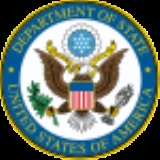 Can Hillary Clinton runs for President even though she was a secretary of state?
More

What is the ratio, on the number of violent attacks on government officials, between Democrats and Republicans.
More
x