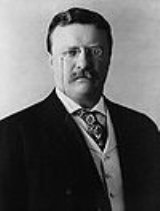 What did Theodore Roosevelt think of the millionaire club?

What was his favorite thing to eat

Why was the Theodore Roosevelt Memorial named after him?

David McCullough's "Mornings on Horseback" made reference to Teddy's paternal grandmother. I am looking for some information on her - I believe her m...

What did he believe about Imperialism and how did he work to support it or in opposition to Imperialism?
More

What were some of his interests, besides government? What led him to become a cowboy?

What were Roosevelt's political beliefs?
More

1901    President of the United States William McKinley dies after an assassination attempt on September 6, and is succeeded by Theodore Roosevelt.

1901    US President Theodore Roosevelt delivers a 20,000-word speech to the House of Representatives asking the Congress to curb the power of trusts "within reasonable limits".

1902    The U.S. Congress passes the Spooner Act, authorizing President Theodore Roosevelt to acquire rights from Colombia for the Panama Canal.

1902    Theodore Roosevelt becomes the first President of the United States to ride in an automobile.

1905    Russo-Japanese War: In New Hampshire, USA, the Treaty of Portsmouth, mediated by US President Theodore Roosevelt, ends the war.

1906    Theodore Roosevelt signs the Antiquities Act into law, authorizing the President to restrict the use of certain parcels of public land with historical or conservation value.

The light has gone out of my life.

Entry in Roosevelt's diary, after which he put a large X, on 1884-02-14, the day in which both his mother and wife died within hours of each other.

There is a curse on this house.

Theodore repeating what his brother, Elliot Roosevelt, said when Theodore reached his home in New York City to find both mother and wife dying on the evening of 1884-02-13. In this same house their father had also died a slow and agonizing death on 1878-02-09 at the age of 46 from stomach cancer.

Far better it is to dare mighty things, to win glorious triumphs, even though checkered by failure, than to rank with those poor spirits who neither enjoy much nor suffer much, because they live in that grey twilight that knows neither victory nor defeat.

Death is always and under all circumstances a tragedy, for if it is not, then it means that life itself has become one.

I'm as strong as a bull moose and you can use me to the limit.