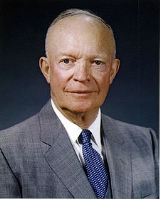 What was important that Dwight D. Eisenhower did to help the american history?

In one of his memoirs, Eisenhower is supposed to have used dowers to find well sites after retreating Germans poisoned existing wells. Can anyone conf...

How many ribbons did eisenhower earn during his military carrer?

what was his budget as president?
More

How did Eisenhower handle the occupation of Germany after WW II?

What was the name of Dwight D Eisenhowers secretary when he was in the military?

What were Eisenhower's policies as President?

What were Eisenhower's achievements as President?
More

1952    Korean War: U.S. President-elect Dwight D. Eisenhower fulfills a campaign promise by traveling to Korea to find out what can be done to end the conflict.

1953    Dwight D. Eisenhower is inaugurated as the first Republican President in twenty years.

This is a long tough road we have to travel. The men that can do things are going to be sought out just as surely as the sun rises in the morning. Fake reputations, habits of glib and clever speech, and glittering surface performance are going to be discovered.

Our landings in the Cherbourg-Havre area have failed to gain a satisfactory foothold and I have withdrawn the troops. My decision to attack at this time and place was based on the best information available. The troops, the air and the Navy did all that bravery and devotion to duty could do. If any blame or fault attaches to the attempt, it is mine alone.

Notes for an announcement, written in advance of the Normandy invasion, in case of its failure, but never delivered (June 1944)

Steady Monty. You can't speak to me like that. I'm your boss.

I hate war as only a soldier who has lived it can, only as one who has seen its brutality, its stupidity.

We must be ready to dare all for our country. For history does not long entrust the care of freedom to the weak or the timid. We must acquire proficiency in defense and display stamina in purpose. We must be willing, individually and as a Nation, to accept whatever sacrifices may be required of us. A people that values its privileges above its principles soon loses both.