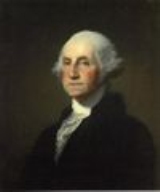 What was the name of the British marksman that had George Washington in his [rifle] sights, but didn't fire? I am also looking for more information ...

What negative things did Washington do?

Where did George Washington spend most of his life

Where did president George Washington spend most of his life
More

What made Washington such a great President and public figure?

I heard George Washington was black.Is this true?

How did the ideas of the Enlightenment influence Washington?

What are some of the myths about George Washington?
More

1754    French and Indian War: in the first engagement of the war, Virginia militia under 22-year-old Lieutenant Colonel George Washington defeat a French reconnaissance party in the Battle of Jumonville Glen in what is now Fayette County in southwestern Pennsylvania.

1776    George Washington and his army cross the Delaware River to attack the Kingdom of Great Britain's Hessian mercenaries in Trenton, New Jersey.

Nothing is a greater stranger to my breast, or a sin that my soul more abhors, than that black and detestable one, ingratitude.

There is a Destiny which has the control of our actions, not to be resisted by the strongest efforts of Human Nature.

But lest some unlucky event should happen unfavorable to my reputation, I beg it may be remembered by every gentleman in the room that I this day declare with the utmost sincerity, I do not think myself equal to the command I am honored with.

Washington's formal acceptance of command of the Army (16 June 1775), quoted in The Writings of George Washington : Life of Washington (1837) edited by Jared Sparks, p. 141

Discipline is the soul of an army. It makes small numbers formidable; procures success to the weak, and esteem to all.

Every post is honorable in which a man can serve his country.

To expect ... the same service from raw and undisciplined recruits, as from veteran soldiers, is to expect what never did and perhaps never will happen. Men, who are familiarized to danger, meet it without shrinking; whereas troops unused to service often apprehend danger where no danger is.

Letter to the President of Congress (9 February 1776)

Let us therefore animate and encourage each other, and show the whole world that a Freeman, contending for liberty on his own ground, is superior to any slavish mercenary on earth.