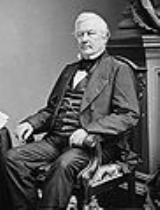 Fillmore opposed the proposal to keep slavery out of the territories annexed during the Mexican–American War
Mexican–American War
The Mexican–American War, also known as the First American Intervention, the Mexican War, or the U.S.–Mexican War, was an armed conflict between the United States and Mexico from 1846 to 1848 in the wake of the 1845 U.S...
(to appease the South), and so supported the Compromise of 1850
Compromise of 1850
The Compromise of 1850 was a package of five bills, passed in September 1850, which defused a four-year confrontation between the slave states of the South and the free states of the North regarding the status of territories acquired during the Mexican-American War...
, which he signed, including the Fugitive Slave Act ("Bloodhound Law") which was part of the compromise.

What was millard fillmore's favorite food an snack
More
x