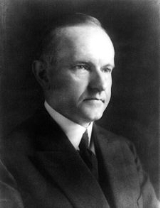 There is no right to strike against the public safety by anybody, anywhere, any time.

There are racial considerations too grave to be brushed aside for any sentimental reasons. Biological laws tell us that certain divergent people will not mix or blend. The Nordics propagate themselves successfully. With other races, the outcome shows deterioration on both sides. Quality of mind and body suggests that observance of ethnic law is as great a necessity to a nation as immigration law.

"Whose Country Is This?," Good Housekeeping Magazine, February 1921

The chief business of the American people is business.

About the Declaration there is a finality that is exceedingly restful. It is often asserted that the world has made a great deal of progress since 1776 — that we have had new thoughts and new experiences which have given us a great advance of the people of that day and that we may therefore very well discard their conclusions for something more modern. But, that reasoning cannot be applied to the great charter.

Nothing in the world can take the place of persistence. Talent will not; nothing is more common than unsuccessful men with talent. Genius will not; unrewarded genius is almost a proverb. Education will not; the world is full of educated derelicts. Persistence and determination are omnipotent. The slogan "press on" has solved and always will solve the problems of the human race.

Quote from a program at a Coolidge memorial service, 1933; cited in The Oxford Dictionary of Quotations (1999)
More
x