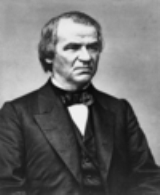 What major events happen during this time
More

There are no good laws but such as repeal other laws.

Statement (1835), as quoted in Andrew Johnson, Plebeian and Patriot (1928) by Robert Watson Winston

No, gentlemen, if I am to be shot at, I want no man to be in the way of the bullet.

As military governor of Tennessee, asserting that he would walk alone, to friends who offered to escort him to the statehouse, after postings of a placard saying he should be "shot on sight." (c.1862); as quoted in Andrew Johnson, President of the United States: His Life and Speeches (1866) by Lillian Foster

First address as Vice-President, widely reported as having been delivered while he was inebriated. (5 March 1865)

Notwithstanding a mendacious press; notwithstanding a subsidized gang of hirelings who have not ceased to traduce me, I have discharged all my official duties and fulfilled my pledges. And I say here tonight that if my predecessor had lived, the vials of wrath would have poured out upon him.

I have had a son killed, a son-in-law die during the last battle of Nashville, another son has thrown himself away, a second son-in-law is in no better condition, I think I have had sorrow enough without having my bank account examined by a Committee of Congress.

Letter to his friend Colonel William G. Moore, complaining of Congressional investigations.... (1 May 1867)

Legislation can neither be wise nor just which seeks the welfare of a single interest at the expense and to the injury of many and varied interests at least equally important and equally deserving the considerations of Congress.

Veto message to the House of Representatives (22 February 1869)

The goal to strive for is a poor government but a rich people.