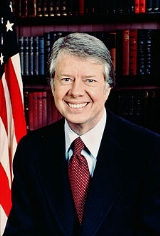 I received an email about former presidents supposebly by the Secret Service Men under them at the time that they served. It said that Jimmy was a he...

Is there plans for a birthday celebration on Jimmys birthday.I wanted to go to the one in Americus several years ago but it was all about money: ticke...
More

Carter and the economy

What were Carter's views on human rights?

Carter and the Energy Crisis

What were some of Carter's most important domestic policies?
More

1977    Jimmy Carter is inaugurated as the 39th President of the United States. He is the last President inaugurated at the east front of the Capitol, which had been the traditional site for Presidential inaugurations since 1829.

1977    President Jimmy Carter pardons nearly all American Vietnam War draft evaders, some of whom had emigrated to Canada.

1978    Development of the neutron bomb is canceled by President Jimmy Carter.

1978    U.S. President Jimmy Carter, President Anwar Sadat of Egypt, and Prime Minister Menachem Begin of Israel meet at Camp David and agree on the Camp David Accords a framework for peace between Israel and Egypt and a comprehensive peace in the Middle East.

1978    U.S. President Jimmy Carter announces that the United States will recognize the People's Republic of China and cut off all relations with Taiwan

1979    Convicted bank robber Patty Hearst is released from prison after her sentence is commuted by President Jimmy Carter.

1979    U.S. President Jimmy Carter signs the first directive for secret aid to the opponents of the pro-Soviet regime in Kabul.

I've looked on many women with lust. I've committed adultery in my heart many times. God knows I will do this and forgives me.

Interview in Playboy magazine (1976), while a candidate for President.

Penalties against drug use should not be more damaging to an individual than the use of the drug itself. Nowhere is this more clear than in the laws against the possession of marijuana in private for personal use.

For the first time in the history of our country the majority of our people believe that the next five years will be worse than the past five years.

We live in a time of transition, an uneasy era which is likely to endure for the rest of this century. During the period we may be tempted to abandon some of the time-honored principles and commitments which have been proven during the difficult times of past generations. We must never yield to this temptation. Our American values are not luxuries, but necessities— not the salt in our bread, but the bread itself.