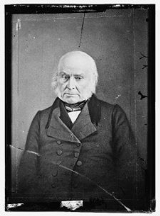 What was John Quincy Adam's position on slavery? What efforts did he make in support of his position on this and related issues?

What are the descendants of john adams who later became presidents

Individual liberty is individual power, and as the power of a community is a mass compounded of individual powers, the nation which enjoys the most freedom must necessarily be in proportion to its numbers the most powerful nation.

This house will bear witness to his piety; this town, his birthplace, to his munificence; history to his patriotism; posterity to the depth and compass of his mind.

Epitaph for John Adams (1829), inscribed on one of the portals of the United First Parish Church Unitarian (Church of the Presidents), Quincy, Massachusetts|Quincy

In charity to all mankind, bearing no malice or ill will to any human being, and even compassionating those who hold in bondage their fellow men, not knowing what they do.

Letter to A. Bronson (30 July 1838); a similar idea was later more famously expressed by Abraham Lincoln, "With malice towards none, with charity for all, with firmness in the right, as God gives us to see the right".

My wants are many, and, if told, Would muster many a score; And were each wish a mint of gold, I still would want for more.

I want the seals of power and place, The ensigns of command, Charged by the people's unbought grace, To rule my native land. Nor crown, nor scepter would I ask But from my country's will, By day, by night, to ply the task Her cup of bliss to fill.

The great problem of legislation is, so to organize the civil government of a community ... that in the operation of human institutions upon social action, self-love and social may be made the same.

"Society and Civilization" in the American Review (July 1845)

To furnish the means of acquiring knowledge is ... the greatest benefit that can be conferred upon mankind. It prolongs life itself and enlarges the sphere of existence.

Report on the establishment of the Smithsonian Institution (c. 1846)

This hand, to tyrants ever sworn the foe, For Freedom only deals the deadly blow; Then sheathes in calm repose the vengeful blade, For gentle peace in Freedom’s hallowed shade.