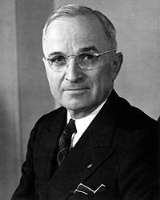 How did truman become vice president?

1947    Cold War: in an effort to fight the spread of Communism, U.S. President Harry S. Truman signs an act into law that will later be called the Truman Doctrine. The act grants $400 million in military and economic aid to Turkey and Greece, each battling an internal Communist movement.

1949    Point Four Program a program for economic aid to poor countries announced by United States President Harry S. Truman in his inaugural address for a full term as President.

Some of my best friends never agree with me politically.

I sincerely wish that every member of Congress could visit the displaced person's camp in Germany and Austria and see just what is happening to 500,000 human beings through no fault of their own.

No government is perfect. One of the chief virtues of a democracy, however, is that its defects are always visible and under democratic processes can be pointed out and corrected.