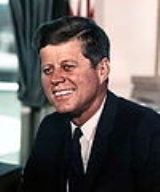 Overview
John Fitzgerald "Jack" Kennedy (May 29, 1917 November 22, 1963), often referred to by his initials JFK, was the 35th President of the United States, serving from 1961 until his assassination
John F. Kennedy assassination
John Fitzgerald Kennedy, the thirty-fifth President of the United States, was assassinated at 12:30 p.m. Central Standard Time on Friday, November 22, 1963, in Dealey Plaza, Dallas, Texas...
in 1963.

After military service as commander of the Motor Torpedo Boats
PT boat
PT Boats were a variety of motor torpedo boat , a small, fast vessel used by the United States Navy in World War II to attack larger surface ships. The PT boat squadrons were nicknamed "the mosquito fleet". The Japanese called them "Devil Boats".The original pre–World War I torpedo boats were...
PT-109
Motor Torpedo Boat PT-109
PT-109 was a PT boat last commanded by Lieutenant, junior grade John F. Kennedy in the Pacific Theater during World War II...
and PT-59
Motor Torpedo Boat PT-59
Motor Torpedo Boat PT-59 was a 77-foot Elco PT boat that served with the US Navy in World War II. She is noted for being the second command of then-Lieutenant, junior grade John F...
during World War II
World War II
World War II, or the Second World War , was a global conflict lasting from 1939 to 1945, involving most of the world's nations—including all of the great powers—eventually forming two opposing military alliances: the Allies and the Axis...
in the South Pacific
South West Pacific Area
South West Pacific Area was the name given to the Allied supreme military command in the South West Pacific Theatre of World War II. It was one of four major Allied commands in the Pacific theatres of World War II, during 1942–45...
, Kennedy represented Massachusetts's 11th congressional district
Massachusetts's 11th congressional district
Massachusetts Congressional District 11 is an obsolete congressional district in eastern Massachusetts. It was eliminated in 1993 after the 1990 U.S. Census. Its last Congressman was Brian Donnelly; its most notable were future Presidents John Quincy Adams and John F. Kennedy and Speaker Tip...
in the U.S. House of Representatives
United States House of Representatives
The United States House of Representatives is one of the two Houses of the United States Congress, the bicameral legislature which also includes the Senate.The composition and powers of the House are established in Article One of the Constitution...
from 1947 to 1953 as a Democrat
Democratic Party (United States)
The Democratic Party is one of two major contemporary political parties in the United States, along with the Republican Party. The party's socially liberal and progressive platform is largely considered center-left in the U.S. political spectrum. The party has the lengthiest record of continuous...
.

What is JFK's primary legacy?

I recently read a book called ''Final Judgement'' by Michael collins-piper, which is an underground best seller as no book store in the States will pu...

Was the Kennedy family cursed?

Why was JFK a good leader?

Did JFK Have graves disease?
More

Why was John F.Kennedy referred to as 'Jack'?

Was John F Kennedy a bad president? Why?

Was John F Kennedy a good man who had a few weakness's or just the same as most politicians?

How much did you make as president
More

1960    While campaigning for President of the United States, John F. Kennedy announces his idea of the Peace Corps.

1960    Robert McNamara is named president of Ford Motor Co., the first non-Ford to serve in that post. A month later, he quit to join the newly-elected John F. Kennedy administration.

1960    Richard Paul Pavlick is arrested for attempting to blow up and assassinate the U.S. President-Elect, John F. Kennedy only four days earlier.

1961    John F. Kennedy is inaugurated as the youngest elected and first Roman Catholic President of the U.S. His inaugural address is one of the most memorable of the 20th century.

1961    John F. Kennedy appoints Janet G. Travell to be his physician. This is the first time a woman holds this appointment.

The voters selected us, in short, because they had confidence in our judgement and our ability to excercise that judgement from a position where we could determine what were their own best interest, as a part of the nation's interest.

A man does what he must — in spite of personal consequences, in spite of obstacles and dangers, and pressures — and that is the basis of all human morality.

The Chinese use two brush strokes to write the word "crisis". One brush stroke stands for danger; the other for opportunity. In a crisis, be aware of the danger — but recognize the opportunity.

Their platform, made up of left-over Democratic planks, has the courage of our old convictions. Their pledge is a pledge to the status quo — and today there can be no status quo.